Intelligence in the US is becoming even more emphatic about the Russian threat to elections, claiming that Russians will start to disrupt the elections of other countries like they are disrupting American ones.
The trouble with this is that intel agencies, specifically the CIA, have not yet proven that Russia has done what the CIA claims it has done.
On Friday, it claimed that Russia had attacked the US with specific hacks. But at least one top official knowledegable about hacking pointed out that using such eminently traceable hacks was unlike the Russians. The entire report was false, he claimed. The Russians wouldn’t have use such easily detected means to accomplish a hacking. If they’d actually done it, they be subtle not obvious.
But a highly classified report, given to president Barack Obama, and sections of which were made public on Friday, reveals that the CIA, the FBI and the NSA all concurred that Russia used cyber warfare and state-funded social media “trolls” to spread negative information about Hillary Clinton and to help Mr Trump win the election.
Russia reportedly gained access to the Democratic National Committee servers from May 2015 to June the following year and passed on Clinton campaign chairman John Podesta’s and Ms Clinton’s emails to WikiLeaks. In return, WikiLeaks founder Julian Assange was given a platform on state-run media outlet RT to criticise the US.
The reality is that the CIA probably needs something to do with its time and fighting against Russians seems like a good way of bolstering the CIA’s importance.
The CIA like much else, is at least partially controlled out of London’s City, by the bankers there. These are the same central bankers that have installed monopoly cental banks around the world. The CIA, from what we can tell, at the top, has people who work directly with these London financiers.

The CIA’s proof regarding Russian hacking is considerably mitigated by the CIA’s lack of ability to say forthrightly that the Russians did the things they say they did. If the Russians did it, the CIA should say so clearly and simply. It will not.
Now with the same lack of evidence, the CIA is warning about overseas targeting of US allies. There is no more certainty regarding these arguments than CIA suppositions that the US itself has been targeted.
Conclusion: None of this is backed up by conclusions, only by theories that may well have a political component to them. The CIA is making work for itself and upping the level of fear-based rhetoric without any proof what they are saying is true.

Ships began unloading U.S. tanks, self-propelled howitzers and hundreds of other fighting vehicles Friday in the northern German port of Bremerhaven, to be moved into Eastern Europe to bolster NATO's deterrence against possible Russian aggression.
Some 3,500 troops from the 4th Infantry Division in Fort Carson, Colorado, will join up with the equipment, which includes 87 tanks and 144 Bradley fighting vehicles, over the next two weeks.
The deployment marks the start of a new phase of Operation Atlantic Resolve, which foresees the continuous presence of an American armored brigade combat team in Europe on a nine-month rotational basis.
The mission is meant to help allay concerns from Estonia, Latvia, Lithuania, Poland and other NATO allies over an increasingly unpredictable and bellicose Russia.
The new forces will gather first in Poland, then fan out across seven countries from Estonia to Bulgaria. A headquarters unit will be stationed in Germany.
When he announced the move last year, U.S. Defense Secretary Ash Carter said the forces would take part in regular military exercises across the region with NATO allies. At that time, U.S. Army Europe Commander Lt. Gen. Ben Hodges called the deployment the 'embodiment of the United States' commitment to deterring aggression and defending our European Allies and partners.'
The U.S. also plans to move in a combat aviation brigade with about 10 Chinook and 50 Black Hawk helicopters and 1,800 personnel from Fort Drum, New York, and a battalion with 24 Apache attack helicopters and 400 personnel from Fort Bliss, Texas. They'll be headquartered in Germany with some aircraft positioned in Latvia, Romania and Poland.
NATO has already started positioning equipment and ammunition in Eastern Europe to reduce the time it would take additional units to deploy if needed.

U.S. tanks, trucks and other military equipment, which arrived by ship, are unloaded in the harbour of Bremerhaven, Germany January 8 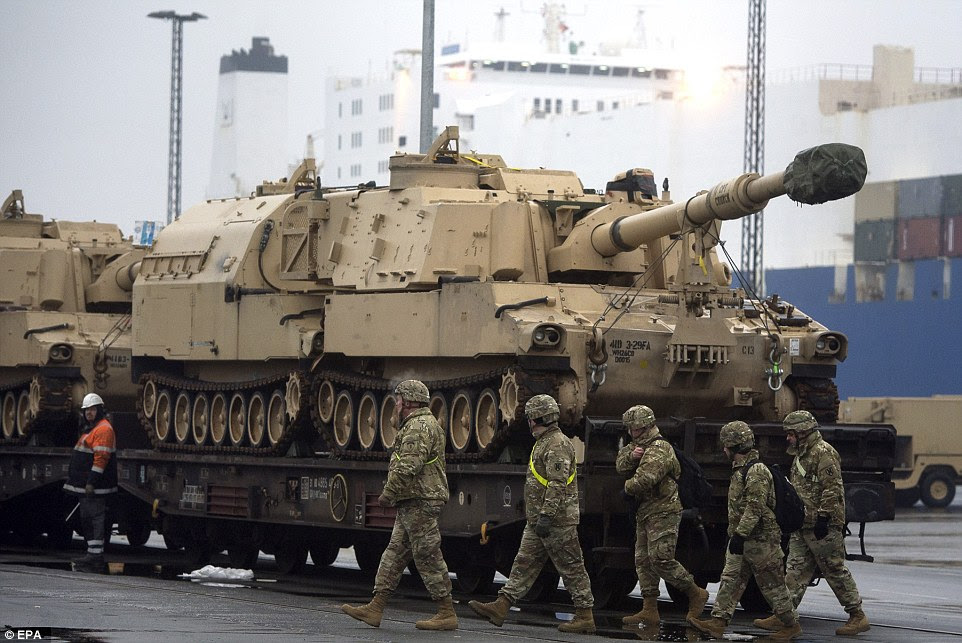 US Army soldiers walk across the front of an armored howitzer as the cargo vessel 'Endurance' moors in the background in Bremerhaven, northern Germany 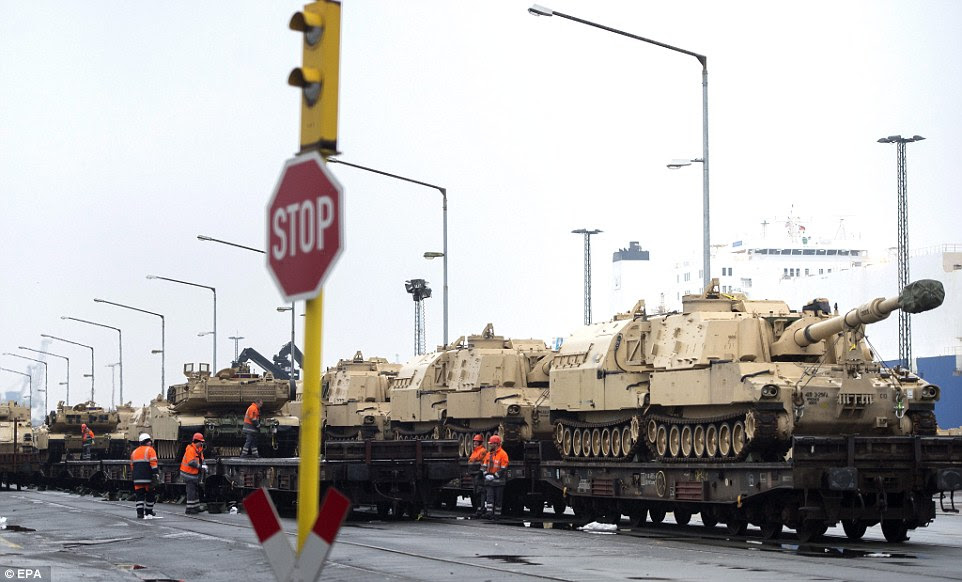 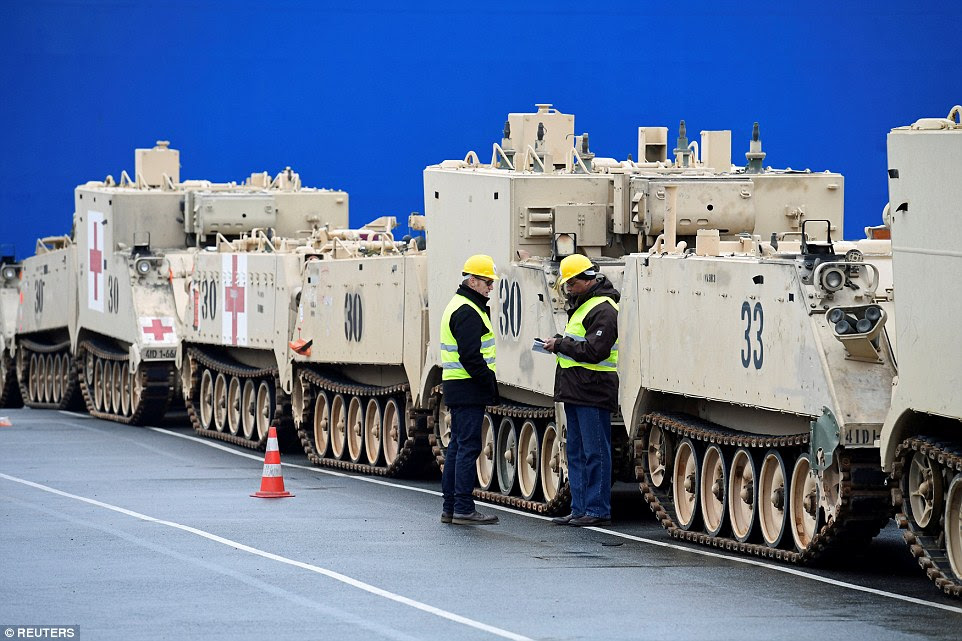 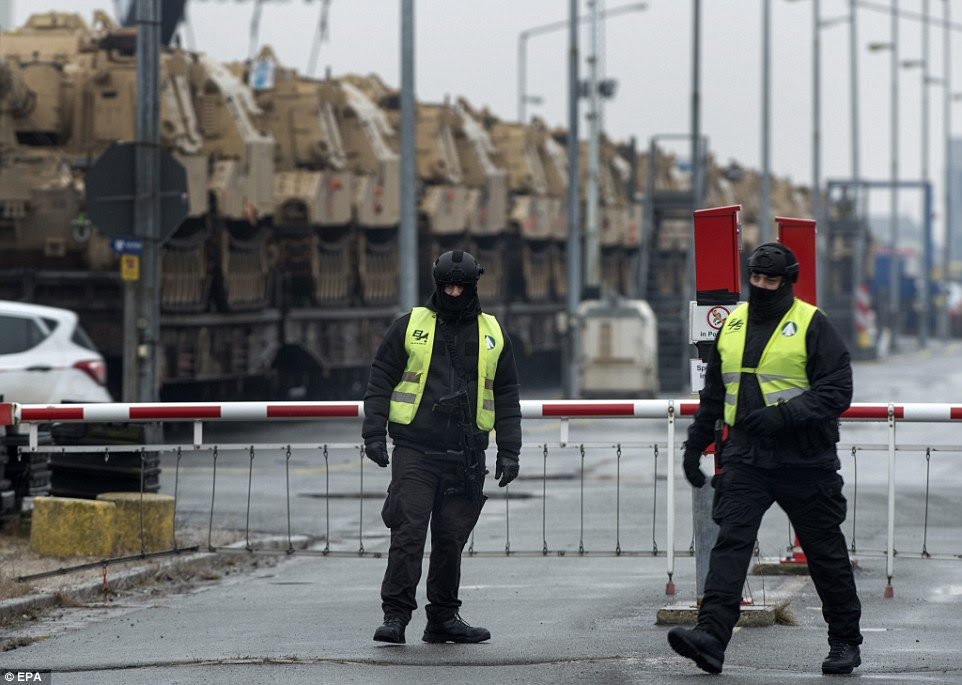 Armed private security contractors guard the area where US military equipment is prepared for railway transport in Bremerhaven, northern Germany 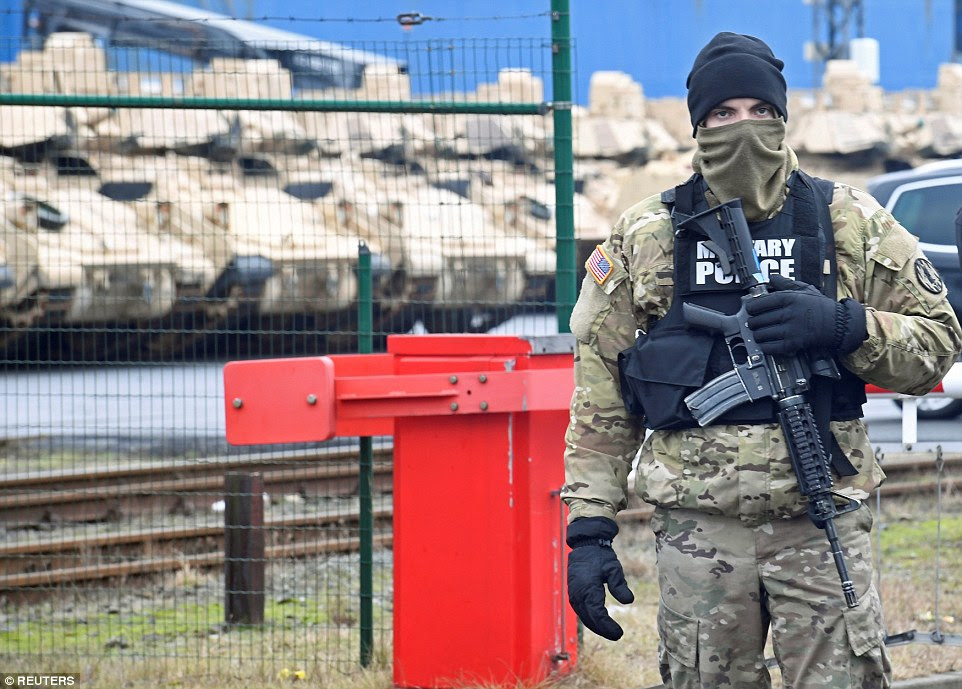 A U.S. soldier guards the unloading of tanks, trucks and other military equipment in Germany on Saturday

Since the intelligence community does not have facts to support their accusations for Russian hacking, maybe it would make more sense that the Wikileaks emails came from Bernie Sanders DNC supporters. Explain the mystery murders of Seth Rich, Shawn Lucas, and John Ashe, all DNC people. They all had evidence of illegal Clinton doings either with the DNC or the Clinton Crime Family Foundation. They were start legal proceedings and testify against the DNC and the Clintons. Interesting info, right?