Fake News - Sometimes You Have To Laugh

This is actually funny at this point. Our "rulers" are getting desperate:

The Kremlin on Wednesday denied reports that Russia had gathered compromising information on US president-elect Donald Trump, calling them fake and claiming their purpose was to damage Moscow’s relations with Washington.

“The Kremlin does not have compromising information on Trump,” President Vladimir Putin’s spokesman Dmitry Peskov told journalists, calling the claims a “total fake” and “obvious attempt to harm our bilateral relations.”

Russia’s denial followed US media reports Tuesday that US spy chiefs had informed Trump that Russian operatives claim to possess deeply compromising personal and financial information about him, on the eve of the president-elect’s first press conference.

CNN reported that intelligence officials briefing him last Friday on allegations of Russian meddling in the US election had also given him a synopsis of the explosive and unverified claims.
The intelligence chiefs presented America’s incoming 45th president, as well as outgoing President Barack Obama, with a two-page synopsis on the potential embarrassment, according to CNN and The New York Times, which cited multiple unnamed US officials with direct knowledge of the meeting.

The document also claims that Trump’s lawyer Michael Cohen met secretly with Kremlin officials in Prague in August 2016 as part of “the ongoing secret liaison relationship between the New York tycoon’s campaign and the Russian leadership.”

Cohen told The Atlantic that the claims were false and the document was fabricated.
“I’m telling you emphatically that I’ve not been to Prague, I’ve never been to Czech [Republic], I’ve not been to Russia,” Cohen said. “The story is completely inaccurate, it is fake news meant to malign Mr. Trump.”

FAKE NEWS: 4Chan Makes Up Story And Trolls The CIA While BuzzFeed Abandons Any Journalistic Integrity They Had Left

These claims have quickly started to fall apart.

WikiLeaks  ✔@wikileaks
35 page PDF published by Buzzfeed on Trump is not an intelligence report. Style, facts & dates show no credibility.https://www.documentcloud.org/documents/3259984-Trump-Intelligence-Allegations.html …

The author of the article has already started to backtrack saying “there is serious reason to doubt the allegations”. 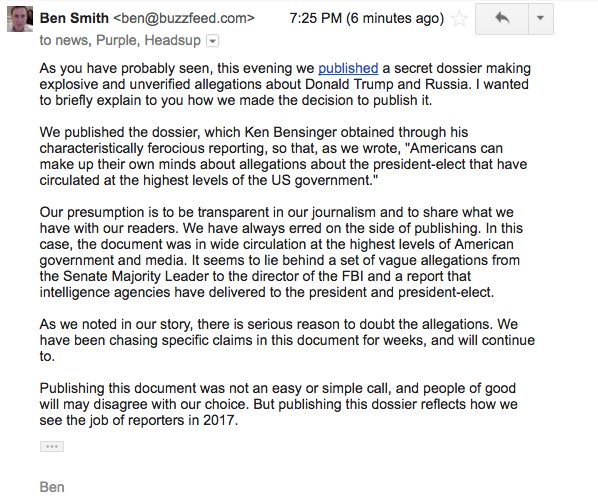 Rick Wilson first denied any involvement in the report, then later admitted he was part of the report.

Michael Cohen who is Special Counsel to Donald Trump, was reported to be in Prague for a secret meeting with Russia. He has since tweeted out that he has never been to Prague.

Michael Cohen  ✔@MichaelCohen212
I have never been to Prague in my life. #fakenews

But quite possibly best of all, it appears 4Chan successfully trolled the CIA.

The claims read very fake and made up, it’s hilarious the CIA and BuzzFeed believed there could be any truth to them.

Here’s how it happened:

4Chan and possibly Anonymous trolls pretended to be anti-Trump and sent false information to Rick Wilson, who is a Never Trump GOP consultant.

Rick Wilson then passed on the information to Evan McMullin, who have close ties to each other. Evan McMullin is an ex-intelligence official.

BuzzFeed was able to get ahold of the report and leaked it.

The mainstream media is now going crazy with the story and the left in general now actually believe this will take down Trump.

Then there’s this…
If these journalists were real journalists and not fake journalists then they would have found that the original documents did not conform to CIA or UK intelligence requirements.
US or UK intelligence would never say “CONFIDENTIAL / SENSITIVE SOURCE.”
The Trump-Russia intel document headers are “CONFIDENTIAL / SENSITIVE SOURCE” and the source is allegedly ex-MI6.The US and UK don’t use that header in ANY sensitive material.

It looks like the liberal mainstream media got punked — again.

Buzzfeed has totally destroyed its reputation by publishing an unsubstantiated fake news piece on Donald Trump.

It turns out the whole ordeal was just a 4Chan prank that the stupid left wing media fell for.

The online news site BuzzFeed on Tuesday published a letter containing salacious allegations — which even the left-leaning outlet acknowledged are unverified — against President-Elect Donald Trump.

The letter, purporting to come from a retired British intelligence agent, details Trump’s alleged relationship with Russia and contends that the Kremlin has been “cultivating, supporting and assisting” Trump for at least five years.

It alleges that Russians have been feeding Trump intelligence on his opponents, including Democratic nominee Hillary Clinton, for years. It also details Trump’s alleged “personal obsessions and sexual perversion.”

BuzzFeed acknowledges that it has not verified the accusations and even notes that the document contains a number of basic factual errors. Yet it published the full document.

“Now BuzzFeed News is publishing the full document so that Americans can make up their own minds about allegations about the president-elect that have circulated at the highest levels of the US government,” BuzzFeed wrote.

It is a shocking breakdown of journalistic ethics.

Even Mother Jones declined to publish the full details and dossier.

Ben Smith, BuzzFeed’s editor-in-chief, defended the decision in a memo to staff.

“Our presumption is to be transparent in our journalism and to share what we have with our readers,” he wrote in the email he subsequently shared on Twitter. “We have always erred on the side of publishing. In this case, the document was in wide circulation in the highest levels of American government and media.”

Astonishingly, though, Smith cast doubt on whether the story his site published was true.

“As we noted in our story, there is a serious reason to doubt the allegations,” he wrote. “We have been chasing specific claims in this document for weeks, and will continue to.”

“Not how journalism works: Here’s a thing that might or might not be true, without supporting evidence; decide for yourself if it’s legit,” tweeted Brad Heath, an investigative reporter for USA Today.

Brad Heath  ✔@bradheath
Not how journalism works: Here's a thing that might or might not be true, without supporting evidence; decide for yourself if it's legit.

Julia Ioffe, a journalist who left Politico after suggesting in a tweet that Trump might be having sex with his own daughter, tweeted Tuesday that she had been approached with the story that BuzzFeed ran with but declined to publish. “Because it was impossible to verify. (I tried.)”

Julia Ioffe  ✔@juliaioffe
Okay, fellow journalists, raise your hand if you too were approached with this story. (I was.)

New York Times reporter Adam Goldman heaped criticism on both BuzzFeed and CNN, which aired a version of the story Tuesday but did not publish all of the unverified details.

“Sequence of events: @CNN finds way to talk about report and @buzzfeed uses that as reason to publish. Media critics are gonna be busy,” he tweeted.

In a way I see some similarities between the MSM and the Main-Line Churches. They're both pushing their own aganda and have strayed far from their purpose; and then they wonder why they're losing influence and why nobody takes them seriously anymore.

If any of you are on face book find mark chens post called BIBLE PROPHESCY MOVES FORWARD IN JUDEA AND SAMARIA BY THE SOVERIGN WILL OF THE LORD ! Brill post

Good morning everyone. Curious as to what we can expect on January 15th. Does anyone think we could have a vote recognizing a Palestinian state before Trump takes office. I don't see how that is likely. Also I was hoping for the Rapture before the 20th. Don't know if that's possible now with everything going on. I read a lot of your thoughts here over the years. I would love to hear everyone's thoughts on this. I guess I'm looking for some comfort. Thank you all.
JD formerly of Tennessee now Hawaiit

Thats a very good question. I have seen conflicting reports on that. I guess we will have to wait and see on that. One interesting thing though worth noting - originally there was going to be no US representation there. Now kerry is going. Hmmmmm

Yes indeed Brother Scott...I understand Lurch...ur Mr.Ed....ur Kerry is going...maybe they will all have a treat and Kerry will bring James Taylor for a sing-along...you know they are hoping for that! lol :)

Hahaha - indeed - what unbelievable arrogance though - by Obama and Kerry...Just incredible. Going DIRECTLY against the God of the Universe...Wow.....Just amazing. We'll see how that works out for both of them.

Yes indeed, we shall see how that works out for them...pure evil and arrogance are within ovomit and Kerry and many others in this world...it is the same recycled evil that began in the Garden, and continued through the centuries...
Mountains melt before Almighty God, and they are so lost, deceived by satan, to believe they are greater than Him...

Psalm 97:1-6
The Lord reigns;
Let the earth rejoice;
Let the multitude of isles be glad!
2 Clouds and darkness surround Him;
Righteousness and justice are the foundation of His throne.
3 A fire goes before Him,
And burns up His enemies round about.
4 His lightnings light the world;
The earth sees and trembles.
5 The mountains melt like wax at the presence of the Lord,
At the presence of the Lord of the whole earth.
6 The heavens declare His righteousness,
And all the peoples see His glory.

Yes indeed...and not to forget Psalm 33:

16 No king is saved by the size of his army;
no warrior escapes by his great strength.
17 A horse is a vain hope for deliverance;
despite all its great strength it cannot save.
18 But the eyes of the Lord are on those who fear him,
on those whose hope is in his unfailing love,
19 to deliver them from death
and keep them alive in famine.

Excellent... Thank you for sharing❤