Millions of dead sardines wash up on a beach in Chile: Dead fish as far as the eye can see!

A new marine life disaster in Chile as millions of dead sardines washed up dead last Thursday in the beach of the locality of Aucho in Quemchi.

The find has attracted the attention of the inhabitants of this coastal sector who did not hesitate to approach to the edge of the place to verify the situation.

Yohana Rodríguez, a tourist entrepreneur, said it was some visitors who first noticed the fish sighting on an entire stretch of the beach and intensified on Friday morning.

"The tourists found the surprise of this stranding of sardines and today we went to see how big it was and of course it was a lot of small sardines," explained the local entrepreneur.
The population of Auchao added that "if what was catching our attention days ago is that it was getting too much seagull".
The unusual phenomenon is already in the knowledge of the port captaincy of Quemchi that moved to the beach of Aucho to inform of this strange event in the coasts of the place. 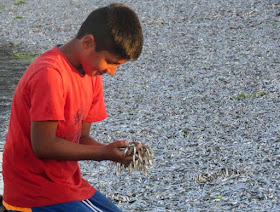 Pritzker declares fisheries disasters… Secretary of Commerce Penny Pritzker today determined there are commercial fishery failures for nine salmon and crab fisheries in Alaska, California and Washington… these fisheries experienced sudden and unexpected large decreases in fish stock biomass or loss of access due to unusual ocean and climate conditions.
Alaska Journal of Commerce, Jan 18, 2017: [T]he pink salmon… catch sank to dismal lows… In 2016, the pink salmon harvests… came in woefully under forecast and stumped biologists… The total state harvest was the smallest since the late 1970s… State and federal scientists interviewed directly following the poor pink salmon season each emphasized that they were mystified… “I am relieved to see that the Department of Commerce [is]acknowledging the dire situation…” said Sen. Lisa Murkowski.
Spokesman Review, Jan 23, 2017: [T]he region’s fishing communities… have suffered through several years of lower-than-expected catch… “the past few years our salmon runs have been hit hard and dropped to alarmingly low levels…” [said Congressman Derek Kilmer].
Alaska Dispatch News, Jan 26, 2017: After a pitiful return of pink salmon to much of Alaska last summer, a federal disaster declaration was officially announced…
Gov. Jay Inslee’s Request: I respectfully request that you declare a commercial fishery failure due to a fishery resource disaster in Washington State. This request is based upon the failure of coho salmon runs returning to Washington State in 2016… Coho salmon returns to Washington watersheds in 2015 were unexpectedly low due to poor survival during the time these fish spent in marine waters of coastal Washington and the Pacific Ocean… Expectations for coho returns in 2016 are very poor due to persisting poor conditions in the Pacific…
US Dept. of Commerce, Jan 18, 2017: Dear Governor Inslee… Your request relates to the impacts to the 2016 ocean salmon troll fishery as a result of the failure of coho salmon runs returning to Washington State due to unusual environmental conditions in the Pacific Ocean that have led to the poor survival and growth of coho salmon…
Gov. Bill Walker’s Request: Districts across the entire area have experienced very poor escapement results, with the Kitoi Hatchery pink salmon return having the lowest survival rate on record… Two out of three Prince William Sound Aquaculture Corporation (PWSAC) hatcheries are experiencing record low commercial harvests.

On 30 January, a seismic swarm was recorded on the south-west slope of Mount Etna. The quakes ranged between 2.1 and 3.5 in magnitude at a depth between 10 and 15 km.

The seismic activity then continued, but was not accompanied by anomalies in the geophysical parameters, in particular the amplitude of the volcanic tremor which was maintained in moderately low stationary values ​​typical of recent months.

Boris Behncke, a specialist volcanologist living in front of the Italian volcanic peak, explains:” The thrust of deep magma may have caused this seismic swarm. In the past, such event were observed a few weeks or months before a major eruption. It is however still too early to say if this earthquake sequence is a precursor of a lateral eruption… But it will happen sooner or later.

Around two thousand years ago Mount Vesuvius erupted, destroying the Roman city of Pompeii and killing an estimated 1,500 people.
Today, a far more sinister supervolcano named Campi Flegrei is lurking underneath Naples in Italy.
Shock research, revealed last month, warned that the “big daddy” of Vesuvius is showing signs of “reawakening” and may be on the brink of going off.
Should it blow in a “big one” eruption, experts told Daily Star Online thousands, possibly millions, of people across Europe would be killed “immediately” from incineration and suffocation.
Dense black ash clouds would block out the sun, plunging the continent into months, if not years, of eerie darkness.
Tens of billions would be instantly wiped off the global economy as air travel, industry and farming would be ground to a halt.
The environment would take a pounding too as a boiling black cloud of hit gas would shoot into the atmosphere, triggering acid rain and accelerating global warming.
Worryingly scientists cannot predict and have no idea when it will next blow its top.
Dr. Luca De Siena, Geophysics professor at University of Aberdeen, is one of the leading experts researching the volcano.
Campi Flegrei last blew in 1538 in an eruption lasting eight days that formed a new mountain, Monte Nuovo.

But its most cataclysmic eruption came when it was formed around 39,000 years ago in a devastating blast that threw masses of lava, rock and debris into the air.
Professor De Siena said current activity does not suggest a “big one”, though “a small could take place”.
He told Daily Star Online: “In case of a small one, similar to the eruption in 1538, people living near the point of the eruption would be affected.
“We are still talking of thousands of people who could die/lose their houses, and the warning would be much less than for a big one.
“The economy of the entire Europe would be still in danger because of consequences.
“In case of a big one, it could affect our chances to live in Europe, immediately killing hundreds of thousands if not millions.
“Ashes would cover the sun, possibly for days/months/years, affecting humanity, fauna, and flora in other continents.”

The Arizona Geological Survey is monitoring a 2-mile long crack that has opened up in the Arizona desert. Recent drone flights over the crack reveal that it has continued to grow both in length and width in Pinal County, to the southeast of Phoenix.

Scientists are actively monitoring the crack and took drone video of the extent of the fissure as normal documentation of an area prone to large cracks in the Earth. The northern portion of the crack is older and partially filled in by eroding sediment and from collapse of the crack’s edges. Meanwhile, the southern portion remains 25 to 30 feet deep and 10 feet across. The fissure tapers out toward each edge but the southern edge continues to grow in length and widen.

The crack was first noticed in 2014 during a review of Google Earth images across the landscape to look for abnormal features. This prompted the Arizona Geological Survey to visit the site and measure the length, width, and depth of the massive fissure. They noticed the size was significantly larger than what appeared in the Google Earth imagery and had grown to almost 2 miles long. The crack had grown significantly due to local heavy rains that enhanced erosion and collapse of the overlying sediment to reveal the underground fissure.

Macedonia reported an outbreak of the highly contagious H5N8 bird flu virus at a farm in the southwestern part of the country, the World Organisation for Animal Health (OIE) said on Monday, citing a report from the local veterinary authorities.
The infected birds were found at a farm in the region of Struga, the report sent by the Paris-based OIE said, without giving details on the type of birds contaminated.
The H5N8 bird flu virus has been spreading across Europe since late last year, leading to the large-scale slaughter of poultry in several countries, while other bird flu strains lead to some human deaths in China.

SCOTT remember the old church lady skits on the old Saturday Night Live?
I got one thing to say about this Assad stroke thing.
"HOW CONVENIENT!"
Frankly I'm surprised the poor dude held up as long as he did.
Man, this year is going to be INSANE, things are changing on a dime with whirlwind precision.
I'M seeking his face but watching his hand, because it's almost impossible not to see his hand in almost every move.
Even my daughter is starting to wake up a little bit.
Hallelujah! JESUS IS LORD!!!!!