The Ruling Elite: Lost The Consent Of The Governed


The Ruling Elite Has Lost The Consent Of The Governed

The American ruling Elite has lost the consent of the governed. This reality is being masked by the mainstream media, mouthpiece of the ruling class, which is ceaselessly promoting two false narratives:

1. The "great divide" in American politics is between left and right, Democrat/Republican

2. The ruling Elite has delivered "prosperity" not just to the privileged few but to the unprivileged many they govern.

The "prosperity" of the 21st century has flowed solely to the ruling Elite and its army of technocrat toadies, factotums, flunkies, apparatchiks and apologists. The Elite's army of technocrats and its media apologists have engineered and promoted an endless spew of ginned-up phony statistics (the super-low unemployment rate, etc.) to create the illusion of "growth" and "prosperity" that benefit everyone rather than just the top 5%.

The media is 100% committed to promoting these two false narratives because the jig is up once the bottom 95% wake up to the reality that the ruling Elite has been stripmining them for decades. As I have tirelessly explained, the U.S. economy is not just neoliberal (the code word for maximizing private gain by any means available, including theft, fraud, embezzlement, political fixing, price-fixing, and so on)--it is neofeudal, meaning that it is structurally an updated version of Medieval feudalism in which a top layer of financial-political nobility owns the engines of wealth and governs the marginalized debt-serfs who toil to pay student loans, auto loans, credit cards, mortgages and taxes--all of which benefit the financiers and political grifters.

The media is in a self-referential frenzy to convince us the decision of the century is between unrivaled political grifter Hillary Clinton and financier-cowboy Donald Trump. Both belong to the privileged ruling Elite: both have access to cheap credit, insider information (information asymmetry) and political influence.
The cold truth is the ruling Elite has shredded the social contract by skimming the income/wealth of the unprivileged. The fake-"progressive" pandering apologists of the ruling Elite--Robert Reich, Paul Krugman and the rest of the Keynesian Cargo Cultists--turn a blind eye to the suppression of dissent and the looting the bottom 95% because they have cushy, protected positions as tenured faculty (or equivalent).

They cheerlead for more state-funded bread and circuses for the marginalized rather than demand an end to exploitive privileges of the sort they themselves enjoy.

Consider just three of the unsustainably costly broken systems that enrich the privileged Elite by stripmining the unprivileged: healthcare (a.k.a. sickcare because sickness is profitable, prevention is unprofitable), higher education and Imperial over-reach (the National Security State and its partner the privately owned Military-Industrial Complex).

While the unprivileged and unprotected watch their healthcare premiums and co-pays soar year after year, the CEOs of various sickcare cartels skim off tens of millions of dollars annually in pay and stock options.

The system works great if you get a $20 million paycheck. If you get a 30% increase in monthly premiums for fewer actual healthcare services--the system is broken. 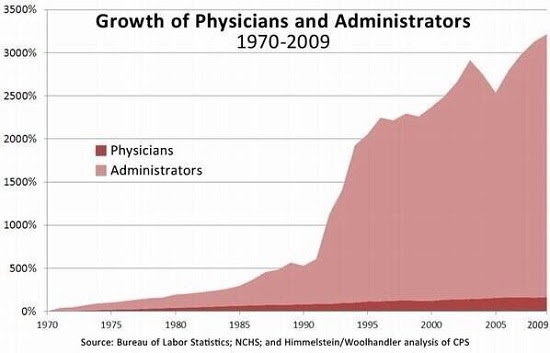 If you're skimming $250,000 as under-assistant dean to the provost for student services (or equivalent) plus gold-plated benefits, higher education is working great. If you're a student burdened with tens of thousands of dollars in student loan debt who is receiving a low-quality, essentially worthless "education" from poorly paid graduate students ("adjuncts") and a handful of online courses that you could get for free or for a low cost outside the university cartel--the system is broken.

If you exit the Pentagon, CIA, NSA, etc. at a cushy managerial rank with a fat pension and lifetime benefits and are hired at a fat salary the next day by a private "defense" contractor--the famous revolving door between a bloated state and a bloated defense industry--the system works great. If you joined the Armed Forces to escape rural poverty and served at the point of the spear somewhere in the Imperial Project--your perspective may well be considerably different.

Unfortunately for the ruling Elite and their army of engorged enablers and apologists, they have already lost the consent of the governed. They have bamboozled, conned and misled the bottom 95% for decades, but their phony facade of political legitimacy and "the rising tide raises all boats" has cracked wide open, and the machinery of oppression, looting and propaganda is now visible to everyone who isn't being paid to cover their eyes.

Brimming with hubris and self-importance, the ruling Elite and mainstream media cannot believe they have lost the consent of the governed.

The disillusioned governed have not fully absorbed this epochal shift of the tides yet, either. They are aware of their own disillusionment and their own declining financial security, but they have yet to grasp that they have, beneath the surface of everyday life, already withdrawn their consent from a self-serving, predatory, parasitic, greedy and ultimately self-destructive ruling Elite.

[There is profanity in the linked video, so if that is offensive, you may want to refrain from opening. Suffice it to say, it represents much pent up anger at the extreme media bias - not just in this election cycle, but the non-stop messaging that seems lifted directly from "1984]

You’ve almost succeeded in destroying the 4th estate and you should be ashamed of yourselves.
This is why 94% of the American people don’t trust you.
When are you going to get that through your thick skulls?
You lie, you smear, you ingratiate yourselves with wanton abandon.
Dear mainstream media: You’ve betrayed your profession, sacrificed its once sacred principles, and stabbed the American people in the back.
Please share this video! https://www.youtube.com/watch?v=GpLAzAZXi2A

Loved the Paul Watson video on exposing the MSM. Probably the thing I regard as perhaps the most evil is bearing false witness. I think knowing Satan is the father of lies is the root of my complete and total disgust for this evil. It's disgraceful how they twist an lie. The guy who did the planned parenthood videos and now the Veritas videos was being castigated and smeared as a convicted criminal on CNN when all he did was what they should have been doing, good investigative journalism. I think they got him for a trespassing misdemeanor. Grrrr!!! Did you catch that I loathe those who bear false witness! I can't wait until they get theirs!

I actually just had this conversation a few minutes ago on email - but the Tribulation is close and its going to be the ultimate control by a centralized government and its press. This is just the progression into the Trib when the AC will control a compliant media.

The worse things get, the closer we get. Thats what I'clinging to in these strange days

No doubt...this same media will one day put the antichrist into power by identical propaganda. For some, they know not what they do...but for many, they know exactly whom they serve. And they are excited about his anticipated arrival! Not to be mean..but I wonder what the media will report on once they are fleeing man-faced, flying scorpions @ the 5th trumpet. Such a horrible fate awaits the unbelieving. What's worse is they will have the privilege of remembering each chance they had to choose The Truth and The Life. Sobering.

Yea, I've had those exact same thoughts, especially around the 21 judgments and how they will spin that