The US has deployed its special forces in at least 7 bases in Northern Syria which are located in Qamishli, Ain Issa, Kobane, Hasaka and Tal Abyadh regions.

The Pentagon admitted last week that it has stationed its forces in Northern Syria but didn’t reveal any details.

Based on information obtained by FNA from media outlets and field sources, the 7 bases in which the US forces are deployed are:

1.The US forces are seeking to turn Rmeilan airfield in Syria's Northern province of Hasakah into their new operations room and build helipads in there.

2. Mabrouka village in the Western parts of Qamishli where at least 45 US special army forces have been deployed.

3. The French Lafarge cement factory, which is located between Kobane and the town of Ain Issa in Jalabiya in Northeastern Syria. Informed sources have reported that the US has increased the number of forces deployed in the region, adding that another base is being built for training the militants and helicopter landing.

6. Tel Byder base in Hasaka province and in the Western parts of Qamishli which is equipped with helipad for military helicopters. The US trains militants in this base.

7. Tal Abyadh base which has been the scene of most US forces' moves in Syria. At least 200 US special forces, equipped with armored vehicles, have been deployed in the region and the US flags have been hoisted above certain government buildings in the area.
No official report has been released yet about the exact number of the US forces and weapons transferred to the abovementioned bases but field sources have reported observing armored vehicles, semi-heavy weapons, TOW missiles, thermal cameras, advanced wireless devices and night goggles in them.

Reports said last month that the US has set up a new military base in Hasaka, Northeastern Syria, under the pretext of demining the region, Kurdish sources said.

"The US has deployed tens of its marines in Mabrouka village in the Western parts of Hasaka province under the pretext of demining Ra's al-Ain city which is now under the control of Kurdish forces," sources told FNA.

According to the Kurdish sources, the US forces have set up their base in one of the buildings of Syria's power department in Mabrouka named Housh al-Kahroba.
The Lebanese al-Akhbar newspaper reported in December that the US experts are reconstructing and equipping a desolate airport special to carrying agricultural products in the region controlled by the Kurdish forces in Hasaka region to turn it into a military base.
A number of US experts entered the region to develop and prepare the runways with 2,500m length and 250m width to be used by fighter jets.

Abu Hajar airport which has not been used since 2010 is located in Tal al-Hajar region in the Eastern countryside of Hasaka which is controlled by the Kurdish People's Defense Units (YPG).

The airbase is located Southeast of the town of Rmeilan, which is one of the YPG’s main strongholds and “largest arms and ammunition depots”.

The US has not received or even asked for a permission from Damascus for reconstructing the airbase. The United States does not have a UN mandate for intervening in the Syria war.

US to deploy new nukes in Europe - Moscow expresses 'concern'

NATO continues to expand its missile potential in Europe and Moscow is concerned over the deployment of NATO infrastructure near its borders, Deputy Foreign Minister Sergey Ryabkov stated.

“NATO members are continuing to expand their anti-missile capability in Europe in the framework of the so-called ‘phased adaptive approach.’ We have repeatedly expressed concern over the placement of elements of strategic infrastructure in the immediate vicinity of our borders, which directly affects our interests in the field of security,” he said at a session of the Russian Public Council on International Cooperation and Public Diplomacy in the Public Chamber.

Ryabkov added that the US’ plans to place new nuclear bombs with increased accuracy in Europe cause serious concern. According to Ryabkov, “this might indicate an intention to use them against military targets, including populated areas during specific military scenarios.”

In the deputy foreign minister’s words, the US’ creation of the European segment of its “missile defense system” is a factor for destabilization “insofar as, at once point, the so-called ‘European missile defense system’ could began to negatively effect the effectiveness of our strategic deterrence.” 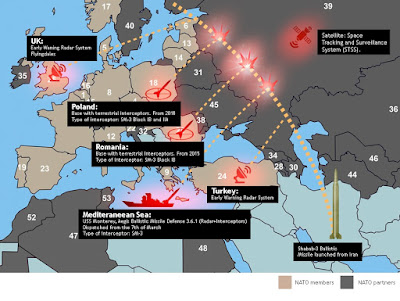 “If this line is crossed and the US and NATO continue to expand their missile shield, then we consider this a symptomatic, demonstrative reluctance on the part of Washington and Brussels to adjust their missile defense plans despite the agreements on settling the situation surrounding the Iranian nuclear program,” the deputy foreign minister asserted.

He remarked that Moscow “will continue to closely monitor the situation and carry on solid work with the Europeans to demonstrate to them the inevitably undesirable consequences of this American project’s realization.”

Ok folks, here we go! Special opps always goes in before the start of any conflict. They are followed by ground forces. This could be the false flag we have been expecting. US engages in the Syrian conflicts, and Obama keeps possession of the White House and the presidency.

All the more reason I'm praying for the return of Jesus for his bride. I can't bare the thought of Obama remaining in office. I'd rather "hold on" David not to my seat for a bumpy earthly ride but for the snatching away! 😀

Wanted to share this for a few days now, but it took a bit of time for the full video to get posted online. Whew, Bibi accepted an award from the Hudson Institute, and did a sit-down interview with all the attendees, which btw, included Henry Kissinger! Yike, but anyway, I came across this on JP, and tracked down the unedited video. 58mins long, but SO insightful as to what Israel, Bibi, is thinking right now. A couple of points was his reference to the "at the same time, the branches, they go up, and up, and up" the "branches" referring to the Jewish People/Israel, and at the end again refers to Israel as the “growing Tree”. Those comments alone, the Holy Spirit took me right to the Scripture of Isaiah 17 where God is describing how He will only allow a remnant of His People to survive in the "boughs" of the “uppermost branch”.
Isaiah 17:6 & 9
6 Yet gleaning grapes shall be left in it, as the shaking of an olive tree, two or three berries in the top of the uppermost bough, four or five in the outmost fruitful branches thereof, saith the Lord God of Israel.
9 In that day shall his strong cities be as a forsaken bough, and an uppermost branch, which they left because of the children of Israel: and there shall be desolation.
Then of course, there is the questions/explanations from Bibi, regarding Putin/Russia and there interest in Israel. He shares his concern of enemies coming in in their Northern Border! This quote from the article at JP:

“With Russian forces fighting alongside Iran and Lebanese Hezbollah guerrillas to keep Syrian President Bashar Assad in power, Putin is the closest thing to a guarantor that Israel's three most potent enemies will not attack it from the north. “

Oh my gosh! Bibi, it is PUTIN/RUSSIA that will end up invading you from the North! Ezekiel 38/39! At the end of the interview Bibi is asked a “personal question” by the Interviewer:
“For over 3000 years, Jews have Prayed to God for the reestablishment of Zion in Jerusalem. Yet Israel was established largely by men & women who were uncertain about God. What roll do you think God
played in the Miracle, the Creation, of the Jewish State?”

Bibi answers that question at that is towards the end of the video. Its a long answer, but we know that Bibi has publicly, in speeches, quoted Ezekiel 37 as a Prophecy of God fulfilled by Him. :)
Below are the original article from JP, and the video of the full interview with the Hudson Institute. :)

"In that day man will look to his maker"No war could do this.The rebuke is acknowledged .......I wonder? Isaiah 17,Daniel 12