They keep on coming: A mag 6.1 - 24km ESE of Ngulu, Micronesia is the fourth major quake to strike in the last 24 hours

A mag 6.1 - 24km ESE of Ngulu, Micronesia is the second major quake this morning and the 4th in the last 24 hours. A tsunami warning has been released.

We could be in for more as the enormous coronal hole on the Sun is now facing Earth directly. This morning’s strike is the 12th major quake of December and the 140th of 2016.

A massive coronal hole on our Sun is turning to face the Earth in the coming days and is releasing solar wind which could reach Earth as early as Wednesday causing wonderful auroras and more major quakes?.

Coronal holes are considered by many experts to be the primary factor for causing large earthquakes so keeps your eyes open and your ears peeled.

Earlier this month a massive coronal hole opened facing the Earth resulting in 8 major quakes in as many days including the massive mag 7.8 in the Solomon Islands

This "coronal hole" is a region where the sun's magnetic field has opened up, allowing solar wind to escape.  A stream of solar wind emerging from this coronal hole could reach Earth as early as Dec. 19th and influence the near-space environment of our planet for several days. G1-class geomagnetic storms and high-latitude auroras are possible when the solar wind arrives.

100 tons of dead fish in Indonesia, thousands more in Brazil 12.5 million chickens and ducks culled in South Korea ends another week in paradise 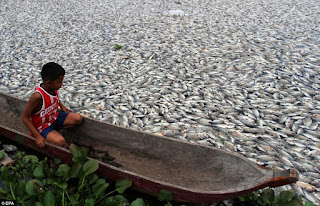 And an update on the world-wide bird flu epidemic: South Korea. Since the first case of the highly pathogenic H5N6 virus was confirmed in mid-November, another 43 cases have been reported and close to 10 million chickens and ducks have been slaughtered in farms across the country. In a statement, the agriculture ministry announced plans to cull an additional 2.5 million birds, making it the worst bird flu outbreak since 2014 when nearly 14 million were slaughtered. The World Health Organisation warned earlier this year that the strain has caused "severe infection" in humans.

A strong earthquake with a magnitude of 7.9 struck 157 km (98 miles) east of Rabaul in Papua New Guinea on Saturday, the U.S. Geological Survey (USGS) reported, prompting a warning about tsunami waves across parts of the archipelago.
"Tsunami waves have been observed," the Pacific Tsunami Warning Center (PTWC) said, warning that waves reaching one to three metres above the tide level were possible along some of Papua New Guinea's coastlines. It said any tsunami waves would hit within the next two hours.
The PTWC cancelled an earlier tsunami warning that encompassed Indonesia, the Solomon Islands, Pohnpei, Chuuk, Nauru, Kosrae and Vanuatu after the quake, which struck the New Ireland region of Papua New Guinea at a depth of 103.2 km.
Any tsunami waves in countries other than Papua New Guinea were forecast to be less than 0.3 metres, the PTWC said.

I always pay attention to EQ's since Jesus specifically mentioned to watch this one. December has been crazy busy. Keep looking up!

I keep up with dutchsince on You Tube. He really knows what he's doing and can predict earthquakes. Check him out!

Been following Dutch for years now, he is on the Mark, that's for sure! :)