Ten sailors aboard two U.S. Navy boats were seized by Iran in the Gulf on Tuesday, and Tehran told the United States the crew members would be promptly returned, U.S. officials said.
"We have received assurances from the Iranians that our sailors are safe and that they will be allowed to continue their journey promptly," White House spokesman Josh Earnest told CNN.
Two U.S. officials told Reuters that it was unlikely the sailors would be released overnight.

While both sides appeared eager not to let the incident escalate further, it came at a delicate time for U.S.-Iranian relations.
Iran and six world powers forged a landmark nuclear accord last July. Formal implementation of the accord could begin in days following steps Iran agreed to take to curb its nuclear activities.
News of the incident broke as U.S. President Barack Obama prepared to make his final State of the Union address to the U.S. Congress. Obama, a Democrat, made the Iran accord a centerpiece of his foreign policy, and Republicans vying to succeed him have assailed him over the deal. Americans elect a new president on Nov. 8.
Iran's semi-official Fars news agency said: "The Revolutionary Guards naval forces seized the American boats two kilometers inside Iranian territorial waters while they were snooping around."
Officials from Iran and the United States are negotiating to free the crew, Fars reported. U.S. defense officials said nine men and one woman were aboard the two vessels seized.
A senior U.S. defense official said the United States had lost contact earlier in the day with two small craft en route from Kuwait to Bahrain.
Another U.S. official said mechanical issues may have disabled one of the boats, leading to a situation in which both ships drifted inadvertently into Iranian waters.
Iranian Foreign Minister Mohammad Javad Zarif assured U.S. Secretary of State John Kerry that the U.S. sailors would be allowed to continue their journey promptly, another U.S. official said.
In a statement, Iran's Islamic Revolutionary Guard Corps confirmed it seized the boats and said the sailors were safe and well. It said France's Charles de Gaulle aircraft carrier was near the seized U.S. boats.
They were on board two riverine patrol boats, one of the officials said. Riverine boats are 38-foot long, high-speed patrol boats used by the U.S. Navy and Marines to patrol rivers and littoral waters.
It was the latest reported incident between U.S. and Iranian forces in the Gulf in recent weeks.
The U.S. Navy said late last month that an Iranian Revolutionary Guards vessel fired unguided rockets on Dec. 26 near warships including the aircraft carrier USS Harry S Truman in the Strait of Hormuz. Iran denied the vessel had done so.
Previous Iranian seizures involved British sailors and marines.

Ten American sailors were being held in Iranian custody after two small U.S. naval craft apparently briefly entered Iranian territorial waters, a U.S. senior defense official said Tuesday.
The official, however, expects the situation to be resolved quickly. A senior administration official said there is nothing to indicate this was anything hostile on the part of any entity in Iran, adding that the U.S. has received high-level assurances that the sailors will be released promptly.
There has been voice contact with the sailors captured in Iran, a senior U.S. official told CNN. The soldiers said they expected to be released in the morning. The official said the plan is to meet the soldiers in international waters after dawn, but did not say whether the two boats will be returned with the sailors.

"Certainly, everybody should be aware of the fact we have been in touch with the Iranians and they have assured us that our sailors are safe and that they'll be allowed to continue their journey promptly," White House Press Secretary Josh Earnest told CNN's Jake Tapper.
Earnest said that President Barack Obama will be in touch with members of Congress about the incident. It occurred hours before he was due to deliver his final State of the Union on Tuesday night.
White House Communications Director Jen Psaki told CNN's Wolf Blitzer that the incident will not be addressed in Tuesday night's speech. 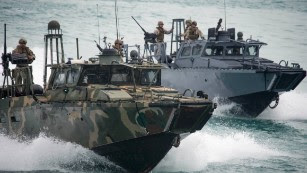 A U.S. official said that it is believed that the sailors were still pierside as of late Tuesday afternoon. Farsi Island is an area where the Iranian Revolutionary Guard Corps -- which the semi-official Fars News agency said detained the service members -- tends to operate, and they are much more aggressive than the Iranian Navy.

Seem familiar!? Its Jimmy Carter on steroids ALL OVER AGAIN with this pathetic excuse of a “president”…coward, naive idiot!
“No timeline set for release of 10 US sailors detained by Iran, official says”

“Iran Revolutionary Guard said earlier Wednesday that any report that 10 detained U.S. Navy sailors would soon be released was “SPECULATION,” while the unit’s naval chief said the country’s foreign minister had demanded an apology from the U.S. for entering Iranian waters.”
“Sharif said the sailors will be debriefed.”If it is determined, after the investigation is carried out, that their action was not intentional, another approach will be taken,” he said. “But if it’s determined, after they are debriefed and interviewed, that their entry [into Iranian waters] was for intelligence gathering or irrelevant action, definitely the authorities will take the necessary measures.”
http://www.foxnews.com/politics/2016/01/13/iran-says-prompt-release-detained-us-sailors-is-speculation.html?intcmp=hpbt1