That scripture comes from the prophet Zechariah, and based on "the word of the Lord concerning Israel", as given to the ancient prophet around 2,500 years ago. It is utterly amazing to watch the ancient prophetic writings come to life. Such prophecies also confirm the existence of the God of the Holy Bible.
"On that day, when all the nations are gathered against her, I will make Jerusalem an immovable rock for all the nations. All who try to move it will injure themselves."
(Zechariah 12:1-3)
In this context, we turn to today's news. Is Jerusalem a cup that sends surrounding nations reeling?
"Peace Can't Be Based On Ignoring The Truth About Jerusalem"

Gov't official slams comments made by Abbas at Int'l Conference for the Defense of Jerusalem in Qatar, comparing them to Arafat's denial of Jewish temple in the city; PA president calls on Arabs, Muslims to flock to J'lem. 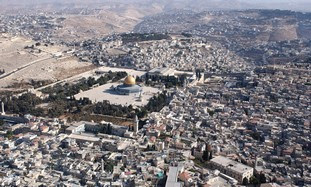 Abbas was speaking at the International Conference for the Defense of Jerusalem in Doha, Qatar. Palestinian Ma'an news agency quoting him as saying, "The Israeli occupation authorities are using the ugliest and most dangerous means to implement plans to erase and remove the Arab-Islamic and the Christian character of east Jerusalem," making no mention of city's Jewish history.
Arafat denied there ever was a Jewish temple in Jerusalem, saying this was the reason he was not willing to make any compromises on the Holy City.

Abbas called on Arabs and Muslims to visit Jerusalem in the face of what he called Israel's accelerated efforts to Judaize the city.

The PA president accused Israel of "surrounding Jerusalem with an Apartheid wall and a band of settlements in order to isolate the city from its surroundings in the West Bank."

He added that visiting "occupied Jerusalem" would remind the Israelis that "Jerusalem is the cause of every Arab, Muslim and Christian," and would not constitute normalization with Israel.

The International Conference for the Defense of Jerusalem was taking place for the first time Sunday. This followed a decision made by delegates to last year’s Arab summit in Libya to hold an annual international conference that would include Arab and foreign countries and civil institutions, to discuss defending Jerusalem “against Israeli violation at all levels.”

Exactly as God told Zechariah - it's all about Jerusalem now.
Abbas Urges Arabs To Fight Judaization Of Jerusalem

Palestinian Authority President Mahmoud Abbas on Sunday called on Arabs and Muslims to visit Jerusalem in the face of what he called Israel's accelerated efforts to Judaize the city.

Dozens of Palestinian Authority clerics have denied any Jewish connection to the holy site, and the Muslim custodians at the Temple Mount have used backhoes and tractors tor remove tons of dirt that might contain Jewish artifacts.

Abbas said, “Jerusalem belongs to all of us and no one can stop us from accessing it."

Jewish archaeologists have retrieved hundreds of priceless artifacts with the aid of volunteers who patiently sift through the tons of dirt that was discarded by the Muslim construction workers. Many of the artifacts have repeatedly provided proof of the Jewish presence in Jerusalem during the period of the Second Temple, more than 2,000 years ago.

The Emir of Qatar on Sunday opened the International Conference for the Defense of Jerusalem, where for the next three days Arabs and Westerners, Muslims and Christians will attack Israel's position that Jerusalem is its eternal, undivided capital.

There has been violence at the Temple Mount in recent days, but it has all originated on the Muslim side. Twice last week, Christian tour groups were stoned by Muslims while visiting the Temple Mount. The violence escalated on Friday, with Muslim worshippers attacking police throughout eastern Jerusalem, resulting in the death of at least one Muslim and the injuring of 11 Israelis.

But the Arab media rarely lets facts get the way of a good Israel-bashing story, and neither do the speakers at the conference in Qatar.

Violence by Arabs from Haifa to Be’er Sheva has grown into new full-blown Intifada, but so far the IDF is holding fire despite deaths. The increasing violence is forcing the IDF to heighten its presence on the highways, and terrorists, already used to de facto control, may escalate their attacks.

Dozens of daily rock-throwing attacks on highways in Judea and Samaria were recorded the past week, causing massive damage to cars, light injuriesand near death. In Haifa, two solders in civilian clothes narrowly escaped with their lives in a brutal attack that police are claiming was not nationalist and was a case of “mistaken identity.”

Netanyahu's comments came following a report by the International Atomic Energy Agency (IAEA) leaked Friday, which indicated that Iran has tripled its capacity to enrich uranium to elevated levels.

A smuggling tunnel in the town of Rafah, on the border with Egypt, and a building where Israel says militants manufacture weapons were destroyed.

The strikes came in response to rockets fired at southern Israel over the weekend, an army statement said. It said Palestinian militants fired more than 50 rockets and mortar shells at Israel over the past two months. No immediate injuries were reported.

Earlier this month, opposition sources reported that Syria's military has begun stockpiling chemical weapons and equipping its soldiers with gas masks near the city of Homs.

The United States is coordinating with Syria's neighbors to safeguard Syrian President Bashar Assad's stockpile of weapons of mass destruction in the event Assad is ousted by popular unrest, Foreign Policy reported on Friday.

Assad's reported stockpile of chemical and biological weapons has been a cause for concern ever since the onset of his 11-month violent crackdown on opposition protests.

Once again we see earthquakes are making the news. Today has already been a big day as far as earthquakes - just take a look at today's quakes that are > 4.0 in magnitude:
That's quite an impressive list for one single day.
Additionally, there were a couple very large quakes from today's list:
Very Strong dangerous Earthquake In Southern Siberia
Very Strong earthquake Hits Taiwan
Seismic Monitor
As usual, the signs are everywhere. In fact, we have to guard against being desensitized as we are now immersed in signs on a daily basis, and we can indeed become immune to the significance and the prophetic fulfillment of the various signs.
It helps to occasionally take a step back and look at the overall picture in the context of prophecies that were written thousands of years ago. We are approaching the latter stages of birth pains, as the signs are appearing daily now and in greater frequency and severity as we approach the Tribulation.
The remaining prophecies will also be fulfilled - that is a guarantee. Such prophecies include the Rapture of the Church - another guarantee - and this prophecy will be fulfilled just as the ones we have been watching every day.
We need to be ready - spiritually - to meet Christ face-to-face. It promises to be a glorious moment and it is coming soon. Such thoughts aren't based on wishes or desires but on the guarantee that God's prophecies will be fulfilled literally and specifically, just as written.
Maranatha!
Posted by Scott at Sunday, February 26, 2012

Scott, well I guess you could argue either way, ie, the way you
say or WHAT I say, ie, that the day
of the LORD will come like a theif in the night, when people are saying peace and safety, ect....

I guess we will SEE the order of
events when it happens.....

STOCKS are up again tonite, and as
I said BEFORE this, I must face
the reality of this bull, no matter
how high it goes.

I would think an R2P would cause
a crash IF ASSAD keeps his word,
ie, 6 hours to bring missiles
near the GOLAN, ect ect.....

BUT THAT IS NOT yet in the cards.
Stocks continue the rally.

we are loaded with UPDATES again
tonite.....

I've been doing some reading, and I found something interesting. So the original temple faced the east gate, right? So then the dome of the rock is south of where the original temple would've been, right? I was reading a news articlw about the al aqsa riots, and they claimed that Israel wanted to separate the temple mount into a Jewish section and a Muslim section. If the Jewish section was to the north, would that not gove the Jews the perfect opportunity to rebuild the temple in its original spot?

Here is the article about the riots:

ANON -
I believe as Asher Kaufman does...I posted a link in the comments section last week, I'll see if I can find it...Based on his work, the DOTR is NOT where the original Temple stood, and the only other outcropping of rock is now covered by a cupola which is in a direct line with the East Gate, and probably where the Hoky of Holies room was. Very interesting stuff.

Dear Scott and fellow blog readers, what are your thoughts about the USA being "Mystery Babylon"?

No matter what God does with the nations, we who name the Name of Christ have these promises :

Ephesians 1:20 …"when He raised Him from the dead and seated Him at His right hand in the heavenly places,"

Eph 2:6 …"and made us sit TOGETHER in the heavenly places IN Christ Jesus,"

Eph 2:19 "Now, therefore, you are no longer strangers and foreigners, but fellow citizens with the saints and members of the household of God,"

Eph 2:21. "Far above all principality and power and might and dominion, and every name that is named, not only in this age but also in that which is to come."

Scott....you do got a spell check hiding in here somewhere????

Ya don't make too many Boo-Boos but when you do....ya do it right. Chuckling....

The combination of fat fingers and being in a hurry is a VERY bad combination indeed :) :)

Here is the Asher Kaufman link along with all the different hypothesis in regards to wether it's north south etc.

Hi Diane! Fwiw, I have never really thought that the US was Mystery Babylon, although I've read some good cases for it.

Hal Lindsey briefly states his opinion on Mystery Babylon this week. The discussion begins about 24 min into his show. He doesn't come right out and say it, but he clearly implies it. His opinion is what I've always understood, as well.

I have always felt that mystery Babylon is Rome, for a variety of reasons, two of which boil down to why John would have had to hide it like this "mystery babylon" instead of just coming out with the name...Of all the places considered, Rome would have been the one location where he couldn't say it - with the Roman guards etc....and the "7 Hills" ....Plus, it has to be visible by ships etc....