The Next Wave: Unemployment

The pace at which Americans are losing their jobs is absolutely breathtaking.  According to the Wall Street Journal, the largest number of new claims for unemployment benefits ever recorded in a single week prior to this year was 695,000 during the week that ended October 2nd, 1982.
So that means that what we are now witnessing is completely unprecedented, as The US Department of Labor reports a stunning increase of 3.283 million people sought initial jobless claims last week amid the virus lockdowns (almost double the expectation of a 1.7million increase). 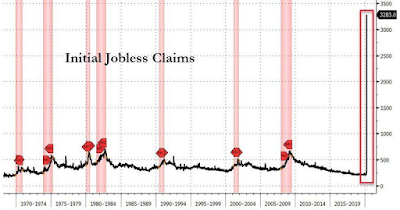 Service industries were hit hard, but the BLS says other industries were cited: health care and social assistance, arts, entertainment and recreation, transportation and warehousing, and manufacturing.
Only three states had estimated claims.
We know that several states’ unemployment websites crashed, were running slow, or malfunctioned in recent weeks as an unprecedented number of applicants tried to file at the same time.
The states with the biggest jump in advance claims from the prior week were Pennsylvania, Ohio and New Jersey.
As Saxo Bank's Christopher Dembik also warns, keep in mind that an undefined number of claims went unreported as states’ unemployment insurance program offices were overwhelmed by the massive number of applications both by phone and online. Some states even informed that their phone lines was saturated and their website crashed due to high demand. It means that next week’s data might be very ugly as well, or even worse.
Look at the situation in America’s four largest state economies that represent roughly 1/3 of US GDP:

So what will this mean for the unemployment rate?

As Bloomberg wrote earlier, St. Louis Fed President James Bullard made a shocking prediction the other day that U.S. unemployment may hit a 30% in Q2. St. Louis Fed economist Miguel Faria-e-Castro published a blog post today explaining the back-of-the-envelope methodology used to arrive at a 30% unemployment rate. He noted that about 67 million people work in jobs with high risks of layoffs, including sales, production and food preparation. In addition, 27 million people work in businesses that require close physical contact, such as barbers and restaurant wait staff.

US Vehicle Sales Volumes Are Down 50%-75% In March


If any company is bracing for the shock of falling U.S. auto sales, it's got to be to be Group 1 Automotive. The company owns and operates 186 auto dealerships along with 242 franchises and 49 collision centers, mostly in the U.S. and U.K.
And on Wednesday, the company provided a business update: the outlook for the industry was catastrophic, to say the least.
As a result of the coronavirus lockdown and beginning on March 6, the company said that overall U.S. vehicle sales volumes began to significantly decrease, and are currently down 50-70 percent from normal expected March volumes. Additionally, the company said that based on discussions with its OEM partners, this sales decline is consistent with that experienced by other dealers.
"Virtually all of Group 1's U.S. dealerships are located in markets operating in some type of 'shelter in place' or restricted travel environments in accordance with applicable state and local orders," the company said in its release.
The company also said it was seeing a similar pattern in the U.K., where it was having a good March prior to the coronavirus lockdown. "Order take in recent weeks declined by approximately 50 percent," the release said.
And like many other companies, they are being forced to take drastic steps to try and shore up their business during this difficult time. Among other things, the company has been forced to furlough 3,000 U.S. operating and staff employees for a 30-day period with an option for a second 30-day period and furlough 2,800 U.K. employees for an initial period of 21 days, which equates to about 90 percent of the Company's U.K. workforce.