Locust Plague Timeline: The Biblical plague started ironically at the holiest site in Islam in 2019: It now stretches from the Chinese border to South Africa: New swarms in China, Botswana and South Sudan

The worst locust outbreak in nearly a hundred years is spreading fast, the FAO yesterday announced South Sudan and Botswana, the first southern African nation has been invaded by migratory locusts and in a separate, unconfirmed report the locust plague has reached the Western borders of coronavirus-hit China, the area of the plagues are vast and the numbers of countries now affected enormous, see map above. A small plague was reported on TBW back in Jan 2019 ironically at the holiest site in Islam. The locusts were filmed swarming around the Great Mosque in Mecca, since then the plague has stretched from the Chinese border to South Africa. See Timeline Below
The worst locust outbreak that parts of East Africa have seen in 70 years has reached South Sudan, a country where roughly half the population already faces hunger after years of civil war, officials announced Tuesday. Around 2,000 locusts were spotted inside the country, Agriculture Minister Onyoti Adigo told reporters. Authorities will try to control the outbreak, he added. The locusts have been seen in Eastern Equatorial state near the borders with Ethiopia, Kenya and Uganda.
All have been affected by the outbreak that has been influenced by the changing climate in the region. The situation in those three countries "remains extremely alarming," the U.N. Food and Agriculture Organization said in its latest Locust Watch update Monday. Locusts also have reached Sudan, Eritrea, Tanzania and more recently Uganda.
The soil in South Sudan's Eastern Equatorial has a sandy nature that allows the locusts to lay eggs easily, said Meshack Malo, a country representative with the FAO. At this stage "if we are not able to deal with them ... it will be a problem," he said. South Sudan is even less prepared than other countries in the region for a locust outbreak, and its people are arguably more vulnerable. More than 5 million people are severely food insecure, the U.N. humanitarian office says in its latest assessment, and some 860,000 children are malnourished. Five years of civil war shattered South Sudan's economy, and lingering insecurity since a 2018 peace deal continues to endanger humanitarians trying to distribute aid. Another local aid worker was shot and killed last week, the U.N. said Tuesday. The locusts have travelled across the region in swarms the size of major cities.
Botswana the first southern African nation has been invaded by migratory locusts

Botswana's Ministry of Agriculture and Security on Tuesday announced that the southern African nation has been invaded by migratory locusts. Plant protection officer Velleminah Pelokgale informed farmers that there is an outbreak of a migratory locust in Ngamiland area in the northern part of the country. She appealed to the public to report to members of the public to report suspected sightings of the locusts to the nearest agriculture office. Botswana is believed to be the first southern African country to register the first case of a locust outbreak.
The swarms of billions of locusts have been destroying crops in Kenya, which hasn't seen such an outbreak in 70 years, as well as Somalia and Ethiopia, which haven't seen this in a quarter of a century. The insects have exploited favourable wet conditions after unusually heavy rains and experts say climate change is expected to bring more of the same.

Locust plague reaches coronavirus-hit China after wreaking havoc across Africa Chilling footage has shown thousands of insects swarming the skies at a border in China. They reportedly come from a plague that has devastated east Africa in recent weeks But the Communist Party of China has tried to downplay the severity of the swarms reaching the country. They claim their modern technology and sufficient stocks which have not been seen in Africa will prevent any widespread damage. That has had little impact among residents already worried about the spread of coronavirus though, which has already killed 1,770 people in mainland China. Another said: “You can believe what the experts say? Just listen to it.” One expert, quoted by the Epoch Times, warned that the locusts could pose a direct threat to China, Thailand, Laos and Vietnam. 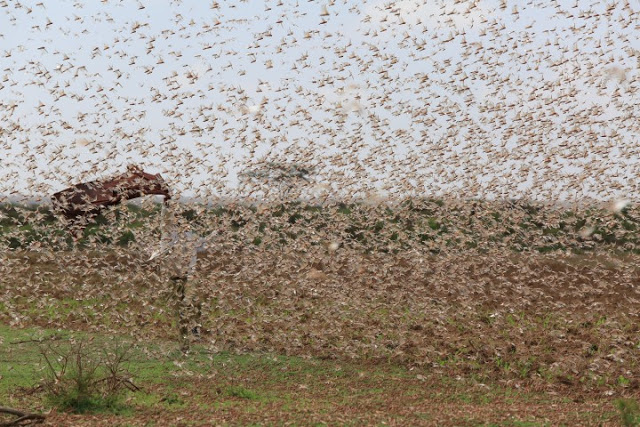 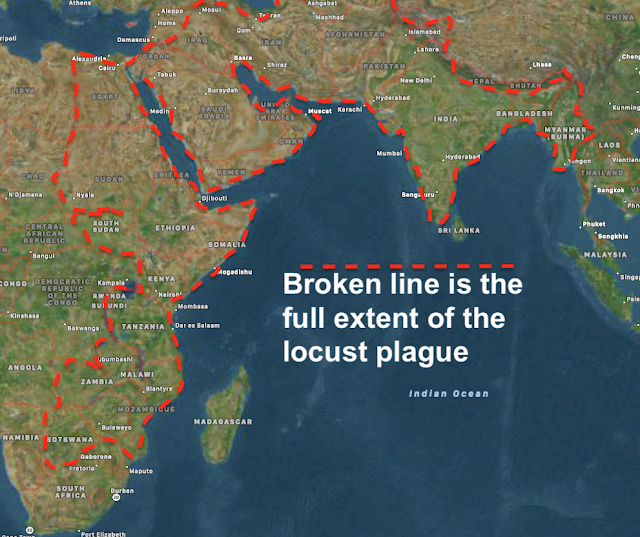