The Locust Story: In 12 Months - Stretching From China All The Way To Southern Africa

On January the 11th, 2019, the holiest site in Islam was swarmed by a plague of locusts, forcing cleaners into action to drive the insects out. The Great Mosque in Mecca, which hosts millions of Muslim pilgrims every year and is the holiest site in Islam was the birthplace of a plague which in just over 12 months would grow into billions, stretching from the western border of China sweeping through Bangladesh, India and Pakistan, through Arabia the Middle East, northern Africa and all the way down to Southern Africa. TBW 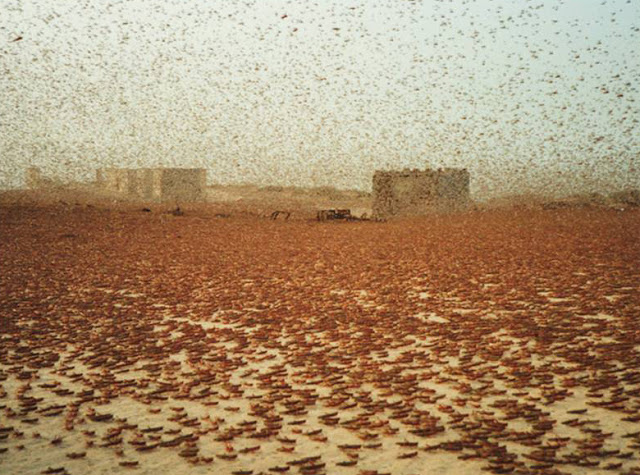 On Wednesday, 17 April 2019, after unprecedented floods killed more than 80 people and damaged or destroyed 100,000 homes, Iran is now bracing its self for swarms of locusts. A locust outbreak in the Arabian Peninsula has been spreading to Iran, threatening crops and food security in large areas of the coastal province of Hormozgan, an official said. Director of a department at Horkozgan's agricultural organization told Tasnim that Iran is facing the worst locust attack in the past 40 years.

He said several swarms of locusts have come from the Arabian peninsula to Iran over the last 10 weeks, some of which have penetrated into farmlands of the province as far as 200 kilometres from the coast. The UN Food and Agriculture Organization (FAO) said in February that a locust outbreak in Sudan and Eritrea was spreading rapidly along both sides of the Red Sea to Saudi Arabia and Egypt. TBW

On Thursday, 2 May 2019, "A tenth of the world's population was said to be in danger!" Saudi Arabia, Iran, Pakistan, Yemen and Oman are all in the path of the now-massive locust swarm.Last month, (April 2019), the Food and Agriculture Organisation of the United Nations warned that locusts are increasing in South West Asia and Arabia due to spring breeding. As well as Saudi Arabia; Iran, Pakistan, Yemen and Oman are also being hit by the insects. During massive plagues, the insects may spread over 29m sq km, covering 60 countries and 20% of the world's land surface, says the UN. Swarms can contain up to 80 million locusts per square kilometre. TBW

The locust invasion is the worst in the area in 60 years, local entomologist Ignazio Floris told La Stampa daily. "The locusts emerge on uncultivated land but then they go to cultivated land to eat," said Coldiretti, adding that there is no current solution to the invasion. TBWSomalia and Ethiopia! December 2019. Biblical sized plagues bringing Somalia to its knees: Record-breaking drought: Cholera epidemic: The worst flooding in living memory: And now the biggest locust invasion in 25 years: Desert locusts are destroying tens of thousands of hectares of crops and grazing land in Somalia in the worst invasion in 25 years, the United Nations food agency said on Wednesday, and the infestation is likely to spread further. The locusts have damaged about 70,000 hectares of land in Somalia and neighbouring Ethiopia, threatening food supplies in both countries and the livelihoods of farming communities, the Food and Agriculture Organization (FAO) said. An average swarm will destroy crops that could feed 2,500 people for a year, the FAO said. TBW

Into January 2020, East Africa: The most serious outbreak of desert locusts in 25 years is spreading across East Africa and posing an unprecedented threat to food security in some of the world's most vulnerable countries, authorities say. Unusual climate conditions are partly to blame. Roughly the length of a finger, the insects fly together by the millions and are devouring crops and forcing people in some areas to bodily wade through them. An "extremely dangerous increase" in locust swarm activity has been reported in Kenya, the East African regional body reported this week. One swarm measured 60 kilometres (37 miles) long by 40 kilometres (25 miles) wide in the country's northeast, the Intergovernmental Authority on Development said in a statement. TBW

We are still in January and Ethiopia, Kenya and Somalia are suffering biggest locust swarm in 70 years: India, Iran, Pakistan, Egypt, Eritrea, Saudi Arabia, Sudan and Yemen are also seeing substantial breeding activity. Ethiopia, Kenya and Somalia are dealing with desert locust swarms of “unprecedented size and destructive potential” that could spill over into more countries in East Africa, the United Nations Food and Agriculture Organization (FAO) warned on Monday.

In addition, numerous desert locust swarms have been breeding in India, Iran and Pakistan since June 2019. And some have migrated to southern Iran where recent heavy rains have nurtured a breeding ground that could generate swarms in the spring. Egypt, Eritrea, Saudi Arabia, Sudan and Yemen are also seeing substantial breeding activity that could see locust bands expand into swarms in the coming months, FAO added TBW

We are still in January 2020 and the devastation is unsurmountable." The unprecedented plagues of locusts sweeping across East Africa will grow 500 times bigger by June: One swarm already contains billions of locusts. TBW

Into February 2020 and the swarm is spreading faster than the coronavirus. A state of emergency is declared in Pakistan to tackle the biggest locust attack in decades. The unprecedented locust swarms now stretch from India all the way down to Kenya in East Africa. Numerous desert locust swarms have been breeding in India, Iran and Pakistan since June 2019. And some have migrated to southern Iran where recent heavy rains have nurtured a breeding ground that could generate swarms in the spring. Egypt, Eritrea, Saudi Arabia, Sudan and Yemen are also seeing substantial breeding activity that could see locust bands expand into swarms of billions in the coming months, FAO added. TBW

A day later: African and Middle East Locust swarms update: A day after Pakistan declared a state of emergency Somalia has declared a national emergency: Agriculture Organization (FAO) "worst situation in 25 years". Somalia has become the first country in the Horn of Africa to declare a locust infestation sweeping the region as a national emergency. The country's Ministry of Agriculture said in a statement on Sunday the desert locust surge "poses a major threat to Somalia's fragile food security situation"."Food sources for people and their livestock are at risk," it added. "The desert swarms are uncommonly large and consume huge amounts of crops and forage. Link

UN warns of 'major shock': Africa locust outbreak spreads: Swarms of billions of locusts destroying crops in Kenya, biggest outbreak in 70 years, as well as Somalia and Ethiopia, India and Pakistan. Uganda scrambled to respond to the arrival of the biggest locust outbreak that parts of East Africa have seen in decades, while the United Nations warned Monday that “we simply cannot afford another major shock” to an already vulnerable region. An emergency government meeting hours after the locusts were spotted inside Uganda on Sunday decided to deploy military forces. TBW

Bahrain is the latest country to be invaded by the Locust Plagues: Swarms of locusts darken the skies in Bahrain as they move eastward toward China. The worst locust outbreak in nearly a hundred years is spreading fast. The FAO yesterday announced South Sudan and Botswana, the first southern African nation to have been invaded by migratory locusts and in a separate, report the locust plague has reached the Western borders of coronavirus-hit China, the area of the plagues are vast and the list of countries now affected is enormous. TBW