U.S. Refuses To Withdraw Diplomats From Venezuela – ‘Will Take Appropriate Actions’ If Harmed…

14 other countries have similarly recognized Guaido…

Venezuela’s opposition filling streets nationwide today in protests against President Maduro and his socialist government. pic.twitter.com/IjzXdd6aOh
Raw footage of what appears to be a person shot…

Both these clips are interesting…

Venezuela's crisis quickly escalated Wednesday as Guaido declared himself interim president in a direct challenge to embattled socialist Nicolas Maduro.
After the opposition leader was backed by the Trump administration, Maduro retaliated by breaking off relations with the U.S. and ordered American diplomats to leave within 72 hours.
Pompeo said Wednesday night that that U.S. would not pull its diplomats out of Venezuela and would instead abide by Guaido's directive that countries retain their diplomatic missions in the South American country.
He said the U.S. doesn't recognize the authority of Maduro and that he doesn't have the legal authority to break diplomatic relations with the U.S.
'We call on the Venezuelan miltiary and security forces to continue protecting the welfare and well-being of all Venezuelan citizens, as well as U.S. and other foregin citizens in Venezuela,' Pomeo said.
'The United States will take appropriate actions to hold accountable anyone who endangers the safety and security of our mission and its personnel.' 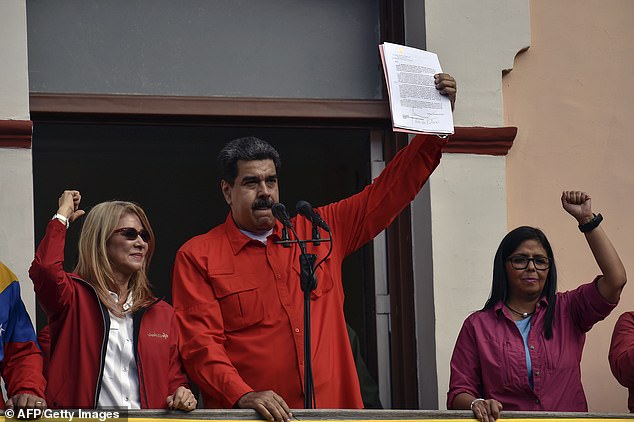 Defiant: Nicolas Maduro appeared on the balcony of the Caracas presidential palace dressed in red with his wife Cilia Flores to his right to say he will stay in power 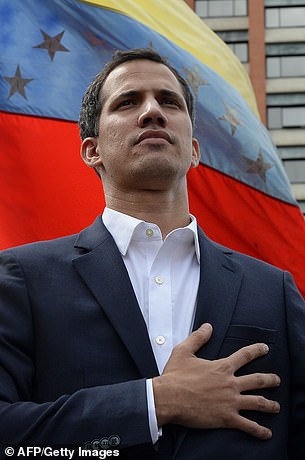 Symbolic move: Juan Guaido was 'sworn in' as 'acting president', taking the oath then holding the country's flag and a picture of Simon Bolivar, who liberated it from Spanish rule, in front of demonstrators in  the east of Caracas 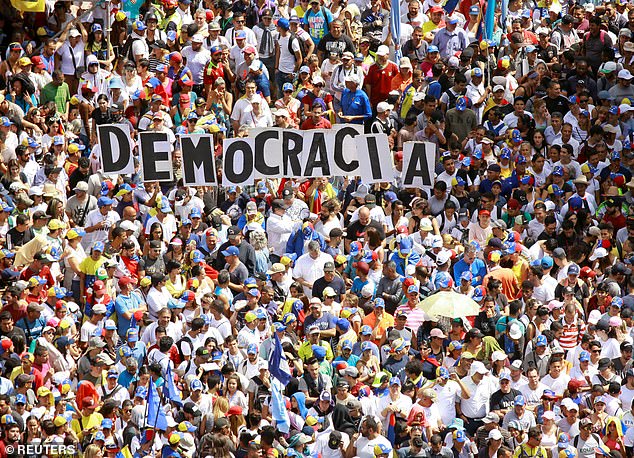 Masses: Huge demonstrations in Caracas continued Wednesday as supporters of the opposition leader continued to call for Nicolas Maduro to relinquish power

The United States and all but one member of the Lima Group of regional nations threw their support behind Guaido after he declared himself interim president in a defiant speech before masses of anti-government demonstrators.
The declaration by the Lima Group, which has been vocal in denouncing Venezuelan President Nicolas Maduro, was signed by Argentina, Brazil, Canada, Chile, Colombia, Costa Rica, Guatemala, Honduras, Paraguay and Peru. Mexico was the only member to not sign.
It said it saw Maduro as president 'for the time being', a limited endorsement which will do little to prop up his case, while in Russia lawmakers accused the U.S.  - like Maduro did - of being behind a 'coup.'
But Guaido's declaration takes Venezuela into uncharted territory, with the possibility of the opposition now running a parallel government recognized abroad as legitimate but without control over state functions.