San Andreas Fault About To Crack?

The director of the Southern California Earthquake Center, Thomas Jordan, made an announcement recently that would have sent a chill down the spine of every Californian: that the San Andreas fault appears to be in a critical state and as such, could generate a large earthquake imminently.

Of course, the reiteration of the seismic hazard to Californians will be nothing surprising, but what is new is the warning that the southern portion of the fault "looks like it's locked, loaded and ready to go."
Why is this eminent seismologist making these alarming statements? Well, the fact is that there has not been a major release of stresses in the southern portion of the San Andreas fault system since 1857. In simple terms, the San Andreas is one of many fault systems roughly marking the border between the Pacific and North American tectonic plates. Both plates are moving in an approximately northerly direction, but the Pacific plate is moving faster than its North American counterpart, meaning that stresses between the plates are constantly building up.

In 1906, some of these stresses were catastrophically released in the San Francisco Bay area in a 7.8 magnitude event and again, in northern California, during the 6.9 magnitude 1989 Loma Prieta earthquake. Events of these magnitudes, however, have not occurred along the San Andreas fault in the south of the state – the 1994 Northridge event was associated with a nearby, but separate, fault system – leading to the suggestion that one is imminent and, given the amount of stress that might actually have accumulated, when it arrives it will be the "Big One."

What is realistic, however, is that a great amount of destruction is likely. While the building codes in California are stringent, recommending retrofitting of seismic protection measures to older buildings and preventing the construction of new buildings near to known fault lines, there is no way to make a building 100 percent safe.
In an attempt to understand the effects of a large, southern San Andreas earthquake, the United States Geological survey modelled a 7.8 magnitude event, with slippage of 2-7 metres, to represent the stresses that have built up in the area since the last large event.
From this model, it was found that damage would be most severe to constructions straddling the fault. Fortunately, constructions of this sort are few and far between following the 1972 Alquist-Priolo Earthquake Fault Zoning Act. What would be affected by this slippage, however, are the 966 roads, 90 fibre optic cables, 39 gas pipes and 141 power line that cross the fault zone.
The total cost of damage to buildings was estimated at $33 billion, with modern buildings faring well but older buildings being particularly susceptible. Fires would rage – as they did following the Northridge earthquake – as gas mains, and water pipes, become severed; in fact, the damage from resulting fires is estimated as more costly than that resulting from the initial shaking.

The overall death toll is estimated at 1,800. And just when things don't look like they can get any worse, the main event will have destabilized the tectonics of the region to such an extent that a series of potentially powerful aftershocks will begin. For example, in 2011, Christchurch, New Zealand was struck by a 6.2 magnitude eventand since then the city and surrounding region have experienced more than 10,000 aftershocks.
Even so, in all probability, the San Andreas is likely to generate a significant earthquake in the not too distant future. When it arrives, the damage will be significant and southern California will be massively affected. But Californians are no strangers to these events and the infrastructure of the state, in recent times, has been designed with earthquake protection in mind.


Beginning in less than a month on June 7th and lasting until June 10th, FEMA and Cascadia Rising 2016 are preparing for a devastating earthquake followed by a tsunami on the Northwest Coast of America that has scientists and other experts asking not IF it will come, but WHEN it will come.As we learn

from Gary Franchi of the Next News Network in the 1st video below, FEMA is also now preparing for 10,000 deaths along the Northwest Coast of America in the region of the Cascadia Subduction Zone due to the quake and the resulting tsunami. We're told that Cascadia Rising will be the most complex disaster scenario that emergency management

and public safety officials have ever faced and the drills will feature preparation for a 9.0 magnitude quake along the Cascadia Subduction Zone and the resulting tsunami that experts believe will devastate much of the Northwest Coast. 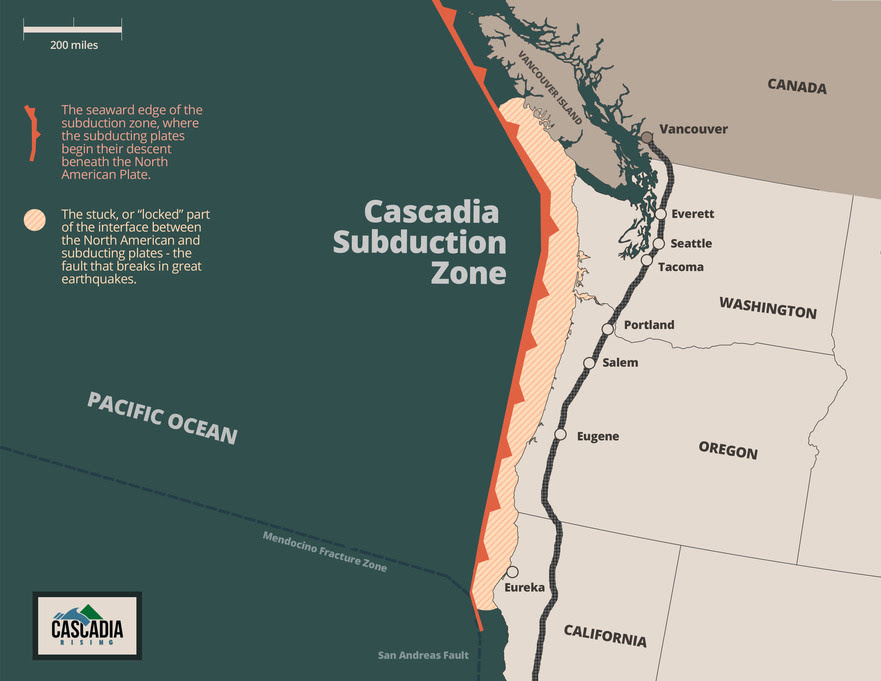 Just days ago we learned from scientists that Mount St Helens volcano is 'recharging' 36 years after the most deadly volcanic blast in 'modern' US history. We're told that the volcano's replenished magma stores have been responsible for setting of a series of earthquakes, more than 130 small magnitude quakes since March with steadily increasing frequency.
As previously reported on ANP, experts have recently warned that the US is getting ready to rumble with the San Andreas fault area allegedly 'locked and loaded' and ready for action with the 'springs wound tight'.

According to The Pacer, UTM's award-winning college

newspaper, the recent small earthquake in the New Madrid seismic zone may be a sign that imminent destruction is coming soon. They have a very keen interest in this as their college is well within the New Madrid Seismic zone. From their story.: