The most active volcano in the Pacific Northwest has begun to stir again.
Since March of this year, scientists have detected more than 130 small magnitude earthquakes beneath Mount St. Helens, with up to 40 occurring per week.
This behaviour indicates that the volcano is steadily recharging – but while it may sound alarming, the experts say they haven’t yet spotted any signs of an imminent eruption.
Washington’s notorious volcano is best known for its ‘cataclysmic’ 1980 eruption, which brought devastation and destruction that stretched on for miles, and visible ash fall nearly 1,000 miles away.

Now, the volcano is once again  recharging.
Beginning on March 14 of this year, scientists with the United States Geological Survey’s Cascades Volcano Observatory have detected low magnitude earthquakes from 1.2 to 4 miles beneath Mount St. Helens.

The U.S. Geological Survey said Friday they have discovered a swarm of small earthquakes underneath Mount St. Helens since March, which could mean it’s recharging with magma.
Scientists said the Pacific Northwest Seismic Network detected more than 130 earthquakes, between 1.2 and 4 miles deep, in the region since March 13. Researchers said the majority of the quakes have registered as a magnitude 0.5 or less and some are too small to detect.
There’s no indication there will be an eruption anytime soon, scientists said.
According to the USGS, the quakes are volcano-tectonic – which are commonly seen in active magma systems. Stress pushes fluid through cracks, creating small quakes or tremors.

Almost 50,000 tonnes of dead salmon and sardines along with millions of dead clams off the coast of Chile as a result of red tides caused by El Niño 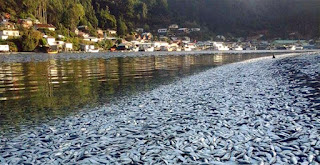 So far this year it is estimated that 40,000 tonnes of salmon and 8,000 tonnes of sardines have been thrown off the coast of Chile as a result of red tides caused by El Niño.A huge amount of dead salmon and sardines are accumulating on the Pacific coast of Chile since early this year due to the effect of climate phenomenon known as El Niño, reports Telesur.It is estimated that a total of 40,000 tons of Salmon in the region of Los Lagos, representing 12% of the annual production of salmon from Chile.This month a further 8,000  tonnes of sardines washed up in the mouth of the river Queule.

Earlier this year hundreds of sea lions washed up dead in Chile: El-Ninõ was blamed.Last summer thousands of sea birds were found dead on beaches in Chile a week after 37 dead whales washed ashoreLast winter more than 300 whales were found washed up in a remote inlet in Patagonia in southern Chile in one of the largest die-offs on record, researchers said."It was an apocalyptic sight.

FIFTY! Earthquakes Shake Nevada in 24 hours! 21 of them “surface quakes” at zero depth!!!!

In the 24 hours of May 5, FIFTY earthquakes struck Nevada; all of them in an area without any seismic faults!  Even more worrisome is that twenty-one (21) of these earthquakes were “surface quakes” at a depth of zero point zero kilometers!

A surface quake means something beneath the surface is pushing UPWARD causing the surface to bulge so much it literally “snaps” causing an earthquake!
What is going on beneath northwestern Nevada that is causing so many surface quakes?  Are the two fault lines shown in the image above, cracking open into one big fault?  If so, why?  No answers seem to be forthcoming from the US Geological Survey.
Here’s the list of quakes from the US Geological Survey;  note all the red colored “surface quakes” with zero point zero depth:

On April 20, the Russia-NATO Council meeting failed to produce results. The failure was followed by a host of decisions taken by NATO to intensify military activities in Europe and boost the Alliance’s military presence in the proximity of Russia’s borders.
NATO exercise Spring Storm was launched on May 2 to last till May 20. The large-scale drill involves around 6 thousand troops. 1500 servicemen have come to Estonia from 10 member states, including the US, the UK, Germany, the Netherlands, Latvia and Lithuania. Each of these states has sent a company-sized unit. The training events are conducted in Tartu, Võru and Põlva counties in Southeast Estonia. Canadian teams of specialists as well as Finnish staff officers are participating in the exercise as well.

The US is using V-22 Osprey tiltrotor aircraft and CH-47 Chinook twin-engine, tandem rotor heavy-lift helicopters to transport the troops. Polish Su-22 fighters and US F-15 fighter jets are providing air cover for ground forces. To make sure the force is multinational, NATO officials asked smaller allies to make contributions, such as logisticians, for supporting operational units.
The participation of a sizable German force demonstrates Berlin’s emerging role as a bigger player in the Alliance.

The Spring Storm is taking place just two weeks after the two-day exercise called Ramstein Alloy 1 was held in all three Baltic States to bring together the air forces of Belgium, Spain, and Poland, as well as non-NATO members Finland and Sweden.
The Spring Storm exercise is an element of broader process aimed at increasing NATO’s military presence in the region.
NATO allies are preparing to put four battalions – a force of about 4,000 troops – in Poland and the Baltic countries as part of an effort by the Alliance to reinforce its military presence near Russia. The US is likely to provide two battalions, while Germany and Britain would likely provide a battalion each. US Deputy Secretary of Defense Robert Work, visiting Brussels, confirmed the overall size of the force.

The NATO plans also encompass the Black Sea region. Turkey, Bulgaria and Romania may expand the NATO maritime presence in the Black Sea as part of a broader strategy to contain Russia, said NATO Deputy Secretary General Alexander Vershbow on April 22.
Russia has long considered the expansion of NATO toward its borders a threat. Earlier this year, Russian President Vladimir Putin signed a defense strategy document that declared the rising military presence by NATO countries in Eastern Europe and the Baltics a threat to Russia’s national security.
Russia has announced its plans to create four new military divisions this year in an effort to reinforce its military forces amid increased exercises by NATO member states.
Russian Foreign Ministry spokeswoman Maria Zakharova said these moves «create grounds to implement military plans against Russia and take practical steps to push military infrastructure closer to Russia's borders».
According to the spokeswoman, the manner in which these initiatives are carried out is «aggressive». NATO uses a non-existent threat from Russia as a pretext. Russia will respond with «fitting political, diplomatic and military» measures to Washington and NATO's «unfriendly» attempts «to exert pressure» on Moscow, she noted.
Russia has long called on NATO to refrain from expanding into Eastern Europe, saying that such moves have the potential to destabilize the security situation in the region. Nonetheless, NATO has accepted 12 eastern European countries since 1999 and now wants to take in one more – Montenegro.

Outrage is growing on both sides of the Atlantic Ocean following a massive new leak of the proposed Transatlantic Trade and Investment Partnership (TTIP), a globalist “trade” agreement negotiated between the Obama administration and the European Union.

The leaked documents are being used, properly in some cases, to portray the treaty as a giant handout to Big Business cronies.

Just as importantly, the almost 250 pages of text also confirm once again that the controversial new “trade” regime aims to merge the regulatory regimes of the United States and the EU under unaccountable transnational institutions. In short, the threats to liberty, privacy, self-government, and national sovereignty are very real. But critics are fighting back.

With public support for the scheme collapsing and the new revelations sparking fury across the political spectrum, some analysts are actually heralding the death of TTIP.

Top politicians, business leaders, and media outlets across Europe are suggesting that the end may be near for the unpopular pseudo-free trade agreement. However, despite the statements of some government leaders, without an even more massive outcry in the United States, the TTIP is unlikely to die a peaceful death anytime soon. Instead, globalists will continue working to impose their anti-sovereignty agenda on the world, just with more regulations to placate the controlled opposition from the Left that demands more environmental, consumer, and labor "protections." Everybody agrees that chances for the scheme to come to fruition are better while Obama occupies the White House.

Of course, the increasingly radical regulatory bureaucracies of the EU and the Obama administration are not “people” — and they are already dominated in large measure by the establishment and its cronies. However, the whining about specific regulations completely misses the point. The real story is not that the TTIP regime will not regulate Americans and Europeans, or "the climate," with sufficient zealotry. Though widely overlooked in the media, the real story is that bureaucrats and lobbyists are working behind closed doors to fashion regulations that will purportedly govern almost a billion people and half of the global economy, all with no accountability to the people subject to the grandiose schemes.

United States defense officials are concerned that Russia’s cutting-edge S-500 missile defense system is so good that the best stealth warplanes in the Pentagon’s arsenal will be unable to do anything about it, defense analyst Dave Majumdar wrote for the National Interest.

“Indeed, some of [Russia’s] new weapons – like the S-500 – are so capable that many US defense official worry that even stealth warplanes like the F-22, F-35 and the B-2 might have problems overcoming them,” he observed.

The S-500 will be a major upgrade to the state-of-the-art S-400 complex that is already in service. It “will form the upper tier of Russia’s layered integrated air defense system,” the analyst added.

How Much Liberty Do Americans Have Left?

Court: 'Deposition of Mrs. Clinton may be necessary.’