One World Religion Cometh, NBC: Your Children Will Be Microchipped 'Sooner Rather Than Later',

So precisely what kind of “message” was Pope Francis attempting to convey?  Sheikh Ahmed al-Tayeb is the Grand Imam of Cairo’s Al-Azhar Mosque, and some have described him as “the highest figure in Sunni Islam“.  The Daily Mail said that the meeting between these two men was a “historic bid to reopen dialogue between the two churches”, and as you will see below this is yet another in a long series of attempts by Pope Francis to build bridges between Catholicism and various other faiths.  In the end, what are we to make of all of this?  Could it be possible that Pope Francis is laying the groundwork for the “super world church” and the coming one world religion that David Wilkerson and so many others have warned about?

Pope Francis made sure that when he embraced Sheikh Ahmed al-Tayeb there would be plenty of reporters there to document the moment.  The following is an excerpt from a Daily Mail article entitled “Pope embraces grand imam at historic Vatican meeting in a bid to bring the Catholic and Muslim churches together“…

Pope Francis today embraced the grand imam of Al-Azhar, the prestigious Sunni Muslim center of learning, in an historic bid to reopen dialogue between the two churches.
At a time of increased Islamic extremist attacks on Christians, Sheik Ahmed el-Tayyib was photographed hugging Francis during a visit to the Apostolic Palace at the Vatican.
This meeting comes in the context of some very curious statements that the Pope have been making about Islam and Christianity lately.  If you don’t know what I am talking about, here is one example…

“Today, I don’t think that there is a fear of Islam as such but of ISIS and its war of conquest, which is partly drawn from Islam,” he told French newspaper La Croix. “It is true that the idea of conquest is inherent in the soul of Islam, however, it is also possible to interpret the objective in Matthew’s Gospel, where Jesus sends his disciples to all nations, in terms of the same idea of conquest.”
The Pope also said he “dreaded” hearing about the “Christian roots of Europe” because, to him, they take on “colonialist overtones” and he called on European nations to “integrate” Muslim migrants into the continent.
“This integration is all the more necessary today since, as a result of a selfish search for well-being, Europe is experiencing the grave problem of a declining birth rate,” he stated. “A demographic emptiness is developing.”

On another occasion, the Pope declared that “Christians and Muslims are brothers and sisters“.  Pope Francis seems to have a strong desire to paint Christianity and Islam as two sides of the same coin, and he has taken steps to reach out to Muslims that no other Pope in history has done.  To illustrate this point, I want to share an extended excerpt from one of my previous articles…

Very early in his papacy, he authorized “Islamic prayers and readings from the Quran” at the Vatican for the first time ever. And as I documented in a previous article entitled “In New York, Pope Francis Embraced Chrislam And Laid A Foundation For A One World Religion“, during his visit to St. Patrick’s Cathedral in Manhattan he made it very clear that he believes that Christians and Muslims worship the same God. The following is how he began his address…

"I would like to express two sentiments for my Muslim brothers and sisters: Firstly, my greetings as they celebrate the feast of sacrifice. I would have wished my greeting to be warmer. My sentiments of closeness, my sentiments of closeness in the face of tragedy. The tragedy that they suffered in Mecca.
In this moment, I give assurances of my prayers. I unite myself with you all. A prayer to almighty god, all merciful.

In Islam, one of Allah’s primary titles is “the all-merciful one”. If you doubt this, just do a Google search. And this certainly was not the first time that Pope Francis has used such language. For example, check out the following excerpt from remarks that he made during his very first ecumenical meeting as Pope…

There is a very clear pattern developing here.  Pope Francis believes that Christians and Muslims worship the same God, and he wants us to know that he considers Islam to be a perfectly acceptable way to seek God.

If you doubt this in any way, I want you to watch this video which was released by the Vatican in January 2016…

In this video, Pope Francis explains that people all over the world are “seeking God or meeting God in different ways” and that “there is only one certainty that we have for all: we are all children of God”.  At about the 20 second mark, leaders from various major religions are shown declaring what they believe.  First, a female Buddhist announces “I have confidence in the Buddha“.  Secondly, a Jewish rabbi declares “I believe in God“.  Thirdly, a Catholic priest tells us that “I believe in Jesus Christ“, and lastly an Islamic leader is shown saying “I believe in God, Allah“.

NBC: Your Children Will be Microchipped “Sooner Rather Than Later”

An NBC News report that promotes the microchipping of children asserts that it will happen “sooner rather than later” and that Americans will eventually accept the process as something just as normal as the barcode.

It goes on to highlight mother of three Steffany Rodroguez-Neely, who talks about how she briefly lost her daughter after she hid behind a rack of clothes, bringing to the fore, “every parent’s nightmare when you can’t find your child.”
“If it’ll save my kid, there’s no stuff that’s too extreme,” says Rodroguez-Neely. “Micro-chipping would be an extra layer of protection, if something bad does happen.”
Rodroguez-Neely goes on to explain how she has braved skepticism from members of the local Tampa Bay Moms Group, people like Kerri Levey, who are wary about implanting their own children.
“You’re putting a battery in your kid, you’re putting a chip in your kid. And, where does it stop,” asks Levey. “Where? It’s going too far. This is a child we’re talking about.”
“If a small chip the size of a grain of rice could have prevented a tragedy, I think most parents would have said, I think I would have done it,” responds Rodroguez-Neely.
The piece flips back to pushing the idea when it quotes electronics expert Stuart Lipoff, who asserts that microchipping children is safe and inevitable.
“People should be aware that testing is being done right now. The military is not only testing this out, but already utilizes its properties. It’s not a matter of if it will happen, but when,” states Lipoff.
Lipoff also told NBC that people shouldn’t be concerned about “big brother” tracking their children and that the technology was merely an upgrade on the traditional barcode.
“When barcodes first came out in the late 1960s, people were appalled. They were wary of them and did not understand the concept. Today, it is so commonplace, we don’t even notice it. A microchip would work much in the same way,” he states, adding that it will “definitely happen”.

Something Big Is Being Planned By The Government And The MSM Has Just Targeted All Patriots, Survivalists, Second Amendment Supporters And Religious Groups

The final phase of the Obama administration's ongoing attack against patriots across America has begun, with the full complicity of the Hell Stream Media aka Main Stream Media, where after lining all their ducks in a row, they prepare the unawakened masses for the final roundup  of Patriots, with a massive propaganda push.If you believe the NWO is pushing for a one world government, or that one by one our constitutional liberties are being eroded, such as gun rights or freedom of speech, or that stocking up on food, water and basic necessities in the event of a catastrophic event is prudent, or that the federal government should adhere to the constitution, or any number of beliefs that oppose the "official" narrative or government policies.... then you are now considered an "extremist."We have all seen the insidious labeling and targeting of patriots, preppers, survivalists, religious groups, veterans and others over the last few years, but to connect a recent Washington Post hit piece against Patriots to the systematic psychological programming of the masses we have witnessed during Obama's term, we have to go back to 2013 for a quick flashback.Many may remember that in April 2013 it was reported that during  a "briefing with an Army Reserve unit based in Pennsylvania, a U.S. Army training instructor listed Evangelical Christianity, Catholicism and even “Islamophobia” as examples of “religious extremism," list along side of groups such as the Ku Klux Klan, Hamas and al-Qaeda.

Those in the movement call themselves patriots, demanding that the federal government adhere to the Constitution and stop what they see as systematic abuse of land rights, gun rights, freedom of speech and other liberties.
Law enforcement officials call them dangerous, delusional and sometimes violent, and say that their numbers are growing amid a wave of anger at the government that has been gaining strength since 2008, a surge that coincided with the election of the first black U.S. president and a crippling economic recession.
Soper started his group, which consists of about 30 men, women and children from a handful of families, two years ago as a “defensive unit” against “all enemies foreign and domestic.” Mainly, he’s talking about the federal government, which he thinks is capable of unprovoked aggression against its own people.
The group’s members are drywallers and flooring contractors, nurses and painters and high school students, who stockpile supplies, practice survival skills and “basic infantry” tactics, learn how to treat combat injuries, study the Constitution and train with their concealed handguns and combat-style rifles.
Again emphasis mine as we note the phychological message being sent, where the "law" considers patriots "dangerous, delusional and sometimes violent and the "targets" that the masses may soon see rounded up or killed will be everyday people like drywallers, nurses, high school students, preppers who stockpile supplies, etc.... 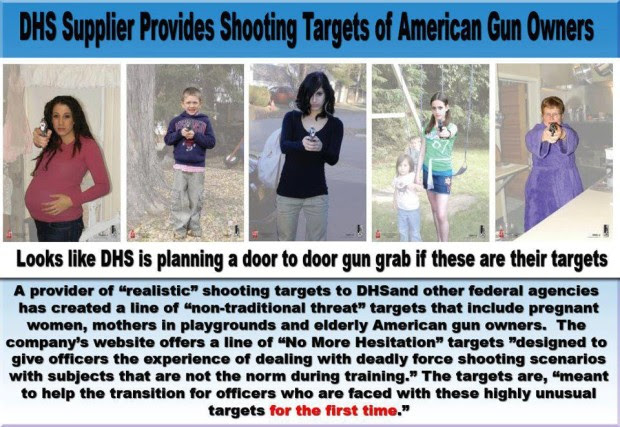 What It Takes To Be President Of The American Police State