"Israel And The Plight Of Mideast Christians"

This article reveals so much about where we are right now, in terms of the general condition of the world today. This one is worth reading and the entire article is found below.

Israel And The Plight Of Modern Christians

The church in Bethlehem had survived more than 1,000 years, through wars and conquests, but its future now seemed in jeopardy. Spray-painted all over its ancient stone walls were the Arabic letters for Hamas. The year was 1994 and the city was about to pass from Israeli to Palestinian control. I was meeting with the church's clergy as an Israeli government adviser on inter-religious affairs. They were despondent but too frightened to file a complaint. The same Hamas thugs who had desecrated their sanctuary were liable to take their lives.

The trauma of those priests is now commonplace among Middle Eastern Christians. Their share of the region's population has plunged from 20% a century ago to less than 5% today and falling. In Egypt, 200,000 Coptic Christians fled their homes last year after beatings and massacres by Muslim extremist mobs. Since 2003, 70 Iraqi churches have been burned and nearly a thousand Christians killed in Baghdad alone, causing more than half of this million-member community to flee. Conversion to Christianity is a capital offense in Iran, where last month Pastor Yousef Nadarkhani was sentenced to death. Saudi Arabia outlaws private Christian prayer.

As 800,000 Jews were once expelled from Arab countries, so are Christians being forced from lands they've inhabited for centuries.

The only place in the Middle East where Christians aren't endangered but flourishing is Israel. Since Israel's founding in 1948, its Christian communities (including Russian and Greek Orthodox, Catholics, Armenians and Protestants) have expanded more than 1,000%.

Christians are prominent in all aspects of Israeli life, serving in the Knesset, the Foreign Ministry and on the Supreme Court. They are exempt from military service, but thousands have volunteered and been sworn in on special New Testaments printed in Hebrew. Israeli Arab Christians are on average more affluent than Israeli Jews and better-educated, even scoring higher on their SATs. 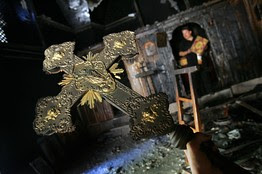 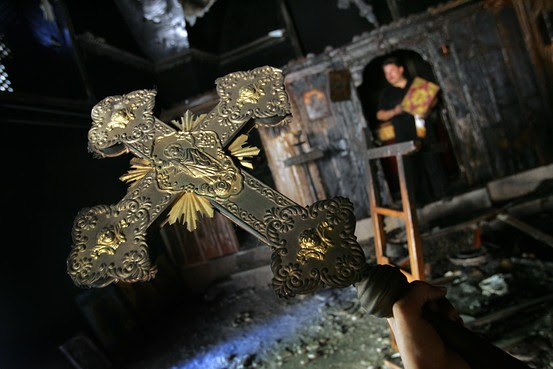 A damaged crucifix survives the burning of a Greek-Orthodox church in Tulkarem in the West Bank on Sept. 17, 2006.

This does not mean that Israeli Christians do not occasionally encounter intolerance. But in contrast to elsewhere in the Middle East where hatred of Christians is ignored or encouraged, Israel remains committed to its Declaration of Independence pledge to "ensure the complete equality of all its citizens irrespective of religion." It guarantees free access to all Christian holy places, which are under the exclusive aegis of Christian clergy. When Muslims tried to erect a mosque near the Basilica of the Annunciation in Nazareth, the Israeli government interceded to preserve the sanctity of the shrine.

Israel abounds with such sites (Capernaum, the Hill of the Beatitudes, the birth place of St. John the Baptist) but the state constitutes only part of the Holy Land. The rest, according to Jewish and Christian tradition, is in Gaza and the West Bank. Christians in those areas suffer the same plight as their co-religionists throughout the region.

Since the Hamas takeover of Gaza in 2007, half the Christian community has fled. Christmas decorations and public displays of crucifixes are forbidden. In a December 2010 broadcast, Hamas officials exhorted Muslims to slaughter their Christian neighbors. Rami Ayad, owner of Gaza's only Christian bookstore, was murdered, his store reduced to ash. This is the same Hamas with which the Palestinian Authority of the West Bank recently signed a unity pact.

Little wonder, then, that the West Bank is also hemorrhaging Christians. Once 15% of the population, they now make up less than 2%. Some have attributed the flight to Israeli policies that allegedly deny Christians economic opportunities, stunt demographic growth, and impede access to the holy sites of Jerusalem. In fact, most West Bank Christians live in cities such as Nablus, Jericho and Ramallah, which are under Palestinian Authority control. All those cities have experienced marked economic growth and sharp population increase—among Muslims.

Israel, in spite of its need to safeguard its borders from terrorists, allows holiday access to Jerusalem's churches to Christians from both the West Bank and Gaza. In Jerusalem, the number of Arabs—among them Christians—has tripled since the city's reunification by Israel in 1967.

There must be another reason, then, for the West Bank's Christian exodus. The answer lies in Bethlehem. Under Israeli auspices, the city's Christian population grew by 57%. But under the Palestinian Authority since 1995, those numbers have plummeted. Palestinian gunmen seized Christian homes—compelling Israel to build a protective barrier between them and Jewish neighborhoods—and then occupied the Church of the Nativity, looting it and using it as a latrine. Today, Christians comprise a mere one-fifth of their holy city's population.

The extinction of the Middle East's Christian communities is an injustice of historic magnitude. Yet Israel provides an example of how this trend can not only be prevented but reversed. With the respect and appreciation that they receive in the Jewish state, the Christians of Muslim countries could not only survive but thrive.

Anyway, back to normal.....
u can lead a horse to water BUT
you cannot make him drink....

Bulls are getting greedy again...

As stated earlier, EWI expected
one MORE NEW HIGH and so did I...

And we will get it, first thing next week.

IT IS NOT time for the end yet.
Bulls need to finish their silly
buying for that LAST HIGH to fall
into place....

Israel is about to be 64 on 14 MAY,
Netanyahu says he will do something
about Iran maybe in a few months
from now ??

I read last nite that they already
have atleast one NUKE.....

This is what happens when people
play games to PACIFY bulls.
NOW THEY SEE the result of their
foolishness.

anyway, stocks are DUE for a HUGE
CRASH after the next high....

are they out of their minds ??

I want to know what the prophecy gang thinks of all this madness...

So apparently Greece has officially defaulted?

Does anyone know if this is possible ?

I was thinking after reading the above on the possibility of Iran already having a nuke, if Iran was to launch a nuke at Israel and israel intercept it over Damascus, could this be Isaiah 17 destruction of Damascus.

Just a thought, hello to all and may God give us all strength and courage to spread his word in these last days

Many very knowledgeable folk feel positive that Iran has possessed several nukes for a number of years. They were bought on the black market after the breakup of the old Soviet Union.

The trick is delivery....

The weapon must be of the shape, size, and weight to work with a particular delivery system. In other words, an artillery fired/delivered nuke won't work if you don't have the exact model artillery within range of the target. The weight, configuration, fuze, and delivery method must all work in concert....calibrated, if you will.

Another variable is the trigger or fuze. These are very tricky animals....and many require a huge investment to keep them at maximum power. There are time of flight based fuzes, altitude based fuzes, impact based, and so on.

It would be important for the country to have a marriage of the delivery systems (particular rocket configuration, payload and altitude?)

Production capability is another concern...it will be hugely important that Iran have internal control of how many weapons they have, rate of production, and internal ability to determine these numbers.

As for Syria....well, the Lord can do anything He wants to do. But to me....
1. Scripture indicates Israel will deliver the Damascus blow.
2. I don't see a trajectory from Iran to Israel that would make this possible.