It began with Iranian claims of a mere accidental gas pipeline explosion or blast that was the result of gas leak at a civilian storage site in the desert late last week.
This after multiple videos emerged online showing what appeared a huge fireball and multiple flashes lighting up the night sky at around midnight Thursday. Clearly a massive blast, it prompted Iran's defense ministry to address it, given it was in the vicinity of a sensitive military site.

A military spokesperson dismissed it as an accident a gas storage facility in a "public area" of Parchin, about 20 miles southeast of Tehran, in statements to sate TV, but it didn't take long for analysts in the West to identify the area as being close to alleged secretive missile factories. 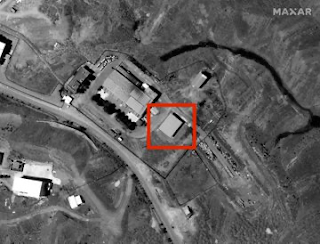 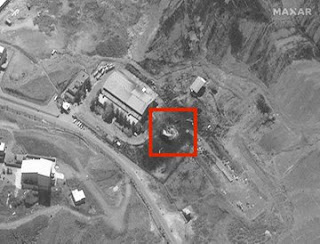 This based on satellite images said to pinpoint the blast site:

Iran may have been up to more than it claims after mysterious explosions ripped apart an area near secretive missile factories in the hills east of Tehran.
Images have identified a burned area in the hills near the Khojir Missile Production Complex.
Regional media is now speculating that something worse may have happened when a massive explosion lit up the night skies over Iran last week. Theories initially pointed to Parchin as the location of the explosion. Iranian media claimed it was just a gas leak at a storage facility.

Prior explosions at missile and other defense testing sites have previously been covered up or downplayed by the Islamic Republic, reports suggest.
Initially on Friday even Iranian media described the explosion, heard and seen for miles, as a mystery blast. "The cause of this sound and light is not yet known, but it was clearly heard in Pardis, in Boumhen and surrounding areas" of the Iranian capital, Mehr news agency had reported.

Further fueling the speculation is that tensions with Israel and the United States are still soaring, given Iran's moving forward with developing uranium enrichment capabilities - blowing past caps in place under the JCPOA - which Tehran has all along said is for peaceful nuclear energy.

But Israel believes Tehran both pursuing warheads and the ability to launch.

Anytime such unexplained 'explosions in the desert' happen in Iran, there's also the question of possible Israeli jet or drone attacks, given Israeli Air Force strikes on Iranian targets inside Syria have become so frequent as to be a near weekly occurrence of late.