The strong quake hit large parts of northern Iraq and the capital Baghdad on Sunday, and also caused damage in villages across the border in Iran.
The epicentre was in Penjwin, in Sulaimaniyah province which is in the semi-autonomous Kurdistan region very close to the Iranian border.
Some of those killed were in small Iranian towns while others died in Iraq and at least 300 people are said to be injured.


In Iraq, officials said the quake had killed six people in Sulaimaniyah province and injured around 150.
'Four people were killed by the earthquake' in Darbandikhan, the town's mayor Nasseh Moulla Hassan said.
Another two people were killed in Kalar, according to the director of the hospital in the town about 70 kilometres (45 miles) south of Darbandikhan.
Iranian state media reported seven people had died in the quake.
'According to the latest toll, six people were killed in Qasr-e Shirin and one in Azgaleh,' Kermanshah province governor Houshang Bazvand told the ISNA news agency.
State television had previously reported six dead in Qasr-e Shirin, close to the Iraqi border, around 40 kilometres southwest of Azgaleh.
Both agencies reported 25 people had been wounded.
The quake struck the mountainous area of Sulaimaniyah province at 9:18 pm (1818 GMT) at a depth of 25 kilometres (15 miles), the monitor said.
It was felt for about 20 seconds in Baghdad, and sometimes for longer in other provinces of Iraq, journalists said.


Many residents in the Iraqi capital Baghdad rushed out of houses and tall buildings in panic.
'I was sitting with my kids having dinner and suddenly the building was just dancing in the air,' said Majida Ameer, who ran out of her building in the capital's Salihiya district with her three children.
'I thought at first that it was a huge bomb. But then I heard everyone around me screaming 'Earthquake!''
There were similar scenes in Erbil, the capital of the semi-autonomous Kurdistan Region, and across other cities in northern Iraq, close to the quake's epicentre.
Iraq's meteorology center advised people to stay away from buildings and not to use elevators, in case of aftershocks. 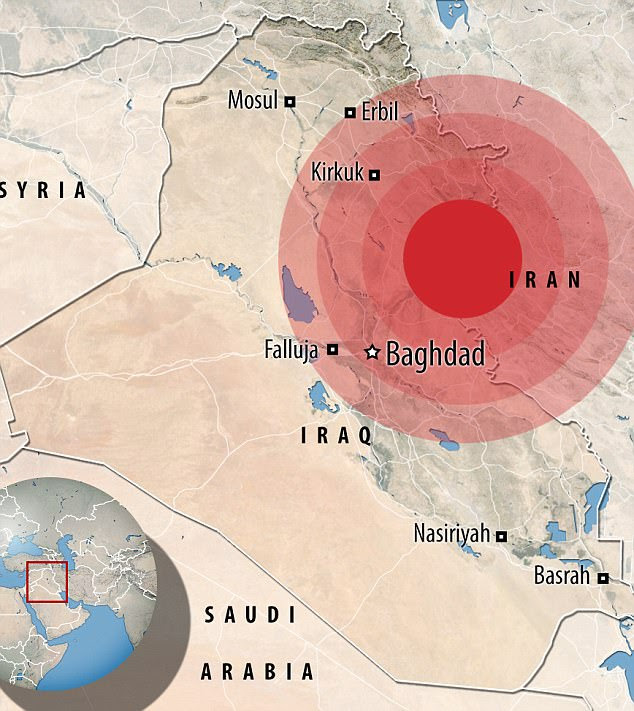 A MASSIVE 7.3-magnitude earthquake has been recorded southeast of the city of Sulaymaniyah in Iraq, near the border with Iran.

At least six people have died and many more have been left injured in the western Iranian town of Qasr-e Shirin, according to state TV.
Meanwhile in Kurdistan, local health officials have confirmed four people have died while 50 others have been left injured by the quake.
Some social media users in Israel, Turkey and the United Arab Emirates (UAE) have also reported feeling tremors.
The earthquake hit at 9:18pm local time (6.18pm GMT) at a depth of 33 kilometres.
One TV station reported: "The quake was felt in several Iranian provinces bordering Iraq ... Eight villages were damaged... Electricity has been cut in some villages and rescue teams have been dispatched to those areas."
An official from the Iraqi Meteorology department said that the earthquake was felt across the country, including the capital Baghdad, but put the magnitude at around 6.5.
Iraqi media is reporting that the quake was felt in several cities and has damaged at least eight villages, while thousands of people are thought to be without power.
In Iran, the country's seismological centre said a 7.3 magnitude earthquake hit Azgaleh.
Many residents in the Iraqi capital Baghdad rushed out of houses and tall buildings in panic.
Majida Ameer, who ran out of her building in the capital's Salihiya district with her three children, said: “I was sitting with my kids having dinner and suddenly the building was just dancing in the air.
"I thought at first that it was a huge bomb. But then I heard everyone around me screaming 'Earthquake!'"
Qubad Talabani, the Deputy Prime Minister of Kurdistan, expressed his fears and condolences.
He said: "A real earthquake has just added to the political, security, humanitarian and economic earthquakes to have hit Kurdistan & Iraq.
"Praying everyone affected is safe and unharmed."
Social media users have posted images and videos of people coming out into the streets cities across the Gulf region just moments after the quake struck.
Earthquakes are frequent in the region - Iran is located on a major fault line and has suffered several devastating quakes in recent years.
A 6.6 magnitude quake struck in 2003, which flattened the southeastern city of Bam and killed more than 25,000 people.

At least six people have been killed across Iraq and Iran, according to state media, after a 7.2 magnitude earthquake struck Iraq, near to the border with Iran.
Iranian media gave contradictory figures on the number of people killed in the quake. The semi-official Fars news agency and state news agency IRNA said at least six people were killed and many others injured in the border town of Qasr-e Shirin. But governor of Qasr-e Shirin, Faramarz Akbari, said only two people had died in the town and 25 others were injured.
At least four people died and dozens were wounded after a major earthquake struck large parts of Iraq on Sunday, according to the Kurdistan Regional Government's Health Minister Rekawt Hama Rasheed.
The US Geological Survey said the epicentre was about 20 miles (32km) southwest of the city of Halabjah and measured 7.2. Over the border in Iran, the country's seismological centre said a 7.3 magnitude earthquake hit Azgaleh.

Iranian state television that the earthquake had been felt in a number of cities in the country and had damaged eight villages, including knocking out electricity in a number of those villages.

The semi-official Iranian ILNA news agency reported that at least 14 provinces had been impacted earthquake. The semi-official Tasnim news agency quoted an emergency services official as saying there were fears that casualties in villages and small towns could be high.

Iranian social media was abuzz with posts of people evacuating their homes, especially from the cities of Ghasr-e Shirin - near the Iraqi border - and Kermanshah.
Esmail Najar, head of Iran's National Disaster Management Organization, said “some injured people might be buried under the rubble in Ghasr-e Shirin”.

The Big Wobble: A mag 7.3 one of the biggest quakes of the year strikes the Iraq Iran border in an area where 5 of Iran's key nuclear sites are positioned

One of the biggest quakes of the year, a mag 7.3 has struck - 32km SSW of Halabjah, on the Iraq, Iran border impacting some of Iran's key nuclear sites and millions of people living in the area.
Three research reactors and two nuclear sites are in the USGS shake area, see map above.
It is not known if any damage has been reported at this time, the sites include,
Arak - Heavy water reactor and production plant.
The existence of a heavy-water facility near the town of Arak first emerged with the publication of satellite images by the US-based Institute for Science and International Security in December 2002. Spent fuel from a heavy-water reactor contains plutonium suitable for a nuclear bomb.
The quake comes during much tension in Iran with the U.S. over their nuclear deal and a possible war developing between Iran and the Saudis.
Today's quake is the 8th major quake of November and  is the 94th major quake of a very quiet 2017 as this year promises to be the lowest total of major quakes this century.

At least six people died and dozens were hurt after a 7.3-magnitude earthquake jolted the "Iraq-Iran border region" on Sunday, the U.S. Geological Survey (USGS) announced, as people across the region reported damage to buildings in the area.
On its website, the USGS placed the quake's epicenter at about 18.6 miles southwest of the Iraqi city of Halabjah. Faramarz Akbari, governor of the Iranian city of Ghasr-e Shirin, said that six people had died and scores more injured, according to the state-run IRNA news agency.

The USGS also issued an "orange" alert for "shaking-related fatalities and economic losses."
"Significant casualties and damage are likely and the disaster is potentially widespread," the agency said online. "Past orange alerts have required a regional or national level response."

Iranian officials saying no reports of casualties yet, but "some might be buried under the rubble," head of crisis center says on state TV.
— Thomas Erdbrink (@ThomasErdbrink) November 12, 2017

In Iraq, the quake destroyed old houses in Sadr City and triggered supermarket damage in the area. Traffic across Baghdad was slowed to a standstill.
Iranian social media was abuzz with posts of people evacuating their homes, especially from the cities of Ghasr-e Shirin and Kermanshah.
Esmail Najar, head of Iran's National Disaster Management Organization, said "some injured people might be buried under the rubble in Ghasr-e Shirin."
Iran is prone to near daily quakes as it sits on many major fault lines. In 2003, a 6.6-magnitude quake flattened the historic city of Bam, killing 26,000 people.