Thousands of residents of Bali have been ordered to evacuate and the local airport has been shut down as Mount Agung, a massive active volcano, threatens to explode on the Indonesian resort island, bringing a possible national disaster and hundreds or thousands of casualties.

The first signs of the volcano’s imminent eruption appeared last Tuesday when it began spewing volcanic ash. On Saturday, thick clouds of ash began shooting nearly 10,000 feet into the air above the mouth of the volcano in three smaller eruptions. Liquid lava has begun welling up in the volcano’s crater, and explosions from the smoking giant can be heard from over seven miles away.
Experts have confirmed that Mount Agung is shifting into the “magmatic” phase in which danger of eruption is heightened.
Lahars, potentially deadly mudflows of volcanic debris and water, have begun flowing down the volcano’s slopes, adding yet another element of danger as authorities warn they could cause flooding in local rivers.
On Monday, the National Disaster Mitigation Agency raised Mount Agung’s alert to its highest level and expanded the “danger zone” around the roiling peak to six miles. The danger zone now encompasses some 22 villages and about 100,000 people.
So far, about 40,000 people have evacuated, and authorities plan to search the area for holdouts who don’t want to abandon their property or livestock.
“We ask people in the danger zone to evacuate immediately because there’s a potential for a bigger eruption,” Agency Spokesman Sutopo Purwo Nugroho told media in Jakarta. He said that the growing pool of lava in the crater “will certainly spill over to the slopes”, endangering anyone nearby.
Mount Agung last erupted over half a century ago in 1963, killing over 1,700 people. After over 50 years of quiet, the volcano awakened in September, rumbling back to life and causing a major panic on the island as the alert was raised to its highest level. Authorities evacuated about 140,000 people from the exclusion zone, extended to 12 miles.

Officials issued a red alert and ordered Bali residents to evacuate after the Mount Agung volcano erupted, blasting ash up to 5.6 miles into the air.
The steam-based eruptions evolved into magmatic blasts over the weekend. Indonesia’s Center for Volcanology and Geological Hazard Mitigation raised its alert from orange to red, its highest level, early Monday local time, The Associated Press reported. Some 40,000 people were evacuated to temporary shelters over the weekend, but an additional 60,000 would still have to move, officials said. They targeted 224 locations for evacuation and told everyone within six miles of Mount Agung to leave.
Flights were suspended at Bali’s airport at Ngurah Rai, stranding thousands as the volcano erupted three times Saturday and continued on Sunday, Bali’s Regional Disaster Management Agency said. Lombok International Airport on Pulau Lombok also closed, CNN reported.


South Pacific Ring Of Fire is living up to it's name as a magnitude 6.0 strikes Papua New Guinea as Mount Agung erupts close by

The South Pacific Ring Of Fire is living up to its name as a magnitude 6.0 strikes Papua New Guinea in the same part of the world as the Mount Agung eruption on the Indonesian island of Bali.Today's quake is the 16th major quake of November which is the busiest month this year by a country mile for quakes of mag 6 or higher.It is also the 101st major quake of 2017 which is well below par as we are well into the 11th month of the year, 2017 is almost certain to be the lowest year this century for major quakes.A mag 7.9 - 35km WNW of Panguna, Papua New Guinea in January is the second largest quake of the year after the mag 8.2 in Mexico in September. 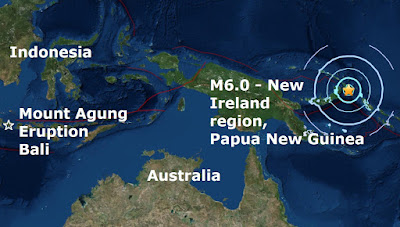