LA PALMA volcano’s red-hot magma has risen after its recent flurry of earthquakes causing the ground on the Canary Islands to “significantly” rise above ground level, experts said.

Volcano experts discovered the ground in the area surrounding local hotel Teneguia Princess hotel has risen by about 1cm to the south and 3.5cm upwards over the past year, according to GPS sensors regulating ground deformation.
The shocking results from the Volcanological Institute of the Canary Islands (Involcan) come after the archipelago was rocked by two separate seismic swarms in the area surrounding the deadly Cumbre Vieja.
One of the world's leading experts in volcanology, Professor Takeshi Sagiya, from the Nagoya University, described the GPS data as ”significant".
He said the recorded change in height looked significant compared with the changes in the last year.

The GPS sensor is located about 3.5 to 4.5 miles south of the centre of the latest seismic swarm.
There were 44 earthquakes recorded up to 2.1 magnitude hit between Friday at 1.52pm and Saturday to 4.17am.

They followed another seismic storm the weekend before, which saw about 50 tremors in three days, between 1.5 and 2.7 on the Richter Scale, sparking fears the islands most active volcano was about to erupt.
Scientist Stefan Scheller said: “If we assume the magma accumulation lies below the seismic swarm and thus raises the ground above.

“A circular elevation of the ground about 7 km around the centre means a quantity of raised rock with a volume of approximately 5 million m³, which corresponds to approximately 12.5 million tons of rock.”
Mr Scheller also played down the recent activity, but did not rule out an eruption would take place.
He said only the future will tell if the rock above the magma is stable enough to stop the movement or if the rise breaks the rock even more, which would be reflected in future micro-earthquakes, and over time would lead to an eruption.
But he insisted deformation had begun a year ago and there was no reason to be rushed or alarmed.
Meanwhile, the National Geological Institute (IGN) insisted hat its sensors have not detected any deformation of the ground. 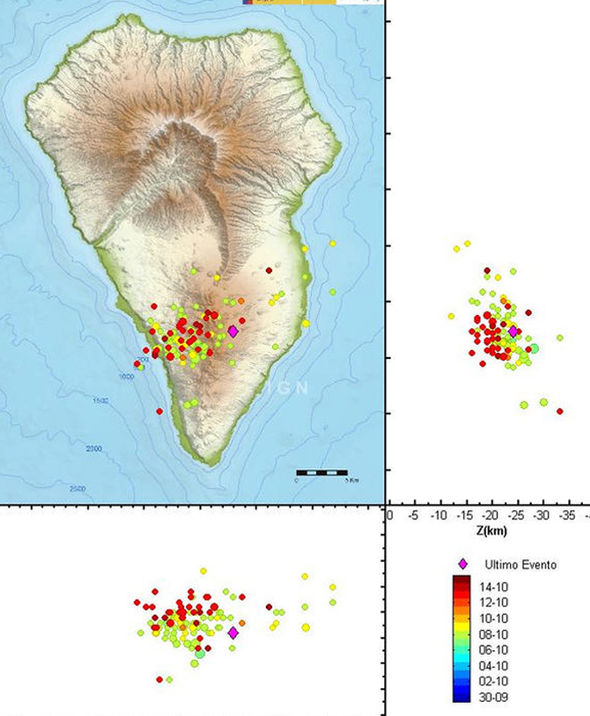