Wildfires Engulf Napa, Sonoma And 6 Other California Counties; More Than 20,000 Forced To Flee

Wine country is burning.
Thousands of residents of Napa Valley, Sonoma and six other counties have been forced from their homes – and thousands more are preparing to flee – as 14 wildfires tear through Northern California, resisting fire fighters’ efforts to contain them.
California’s fire chief says at least 1,500 homes and commercial buildings have been destroyed – and officials said that estimate was probably conservative. While no deaths have been confirmed, fire officials say numerous residents have been injured and a number of people are also missing. California Department of Forestry and Fire Protection Director Ken Pimlott say an estimated 20,000 people have been evacuated.
Gov. Jerry Brown has declared a state of emergency for Sonoma, Napa and Yuba counties, revealing that FEMA had approved emergency grants to help the state combat the fires. More than 20,000 people have been forced to evacuate, state officials said.

As the LA Times reported, fire-friendly weather conditions converged prior to the outbreak of fires, which originated primarily in Sonoma and Napa.
The Santa Ana winds - strong, extremely dry down-slope winds that occur mainly in the fall and originate inland in desert regions – were one factor in helping the fires spread. Warm temperatures also create the dry conditions that have helped the blazes spread like…well…wildfire.

“This is really serious, it’s moving fast. The heat, the lack of humidity and the winds are all driving a very dangerous situation and making it worse,” the governor said at a morning press conference. “It’s not under control by any means. But we’re on it in the best way we know how.”

Smoke plumes from the fires showed up on the NWS radar…

…and were also detected by satellite imaging…

Smoke wafted down to the Bay Area, but the Marin County Fire Department confirmed that there were no fires in that part of the state.
Further south in Anaheim Hills, a 25-acre brush fire broke out Monday, forcing some residents to evacuate, NBC reported.

Firefighters said they were concerned about embers drifting on strong winds into nearby neighborhoods. Thick smoke billowed over the freeways and the communities of Yorba Linda and Anaheim Hills.
October is historically one of the most dangerous months of the year when it comes to wildfires in California. Four of the state's five most-destructive fire occurred in October, including the 1991 Oakland Hill firestorms that resulted in 25 fatalities and burned 2,900 buildings.

The Lake and Mendocino County Sheriffs ordered evacuations. The sheriff in Butte County said there were two fires in the area and ordered mandatory evacuations in several neighborhoods.
Belia Ramos, the chairwoman of the Napa County board of supervisors, said the county was trying to contain three main fires, one of which is threatening more than 10,00 acres in Northern Napa County, another that is threatening between 8,000 to 12,000 acres, and a third that has affected some 2,00 acres.

As a large hole opens up on our Sun's atmosphere two major quakes poles apart strike the ring of fire! 3rd major quake in 24 hours

USGSTwo major quakes, poles apart, struck the ring of fire last night.A mag 6.3 hit the Balleny Island region near the Antarctic and a mag 6.6 hit the Buldir Island Alaska, the Alaskan quake being very deep at 112 km deep and the Balleny Island quake just 10 km deep.Last nights quake is the third major quake in 24 hours which comes as a major Coronal hole has opened up on our Sun, see picture below, it is well known now Coronal Holes and Solar activity do influence earthquake, volcano activity and hurricanes on our planet and with the ring of fire flexing it's muscles recently the next few days could be very interesting.Last night quakes brought the months total to 4 and the 79th of 2017. 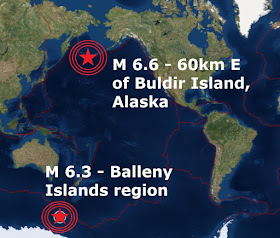 NASA space weather and quakesThe BBC pointed out in 2008: Nasa scientists have said they could be on the verge of a breakthrough in their efforts to forecast earthquakes.Researchers say they have found a close link between electrical disturbances on the edge of our atmosphere and impending quakes on the ground below.Just such a signal was spotted in the days leading up to the recent devastating event in China.They have teamed up with experts in the UK to investigate a possible space-based early warning system.Many in the scientific community remain deeply sceptical about whether such signals are indeed indicators of an approaching earthquake.But Minoru Freund, a physicist and director for advanced aerospace materials and devices at Nasa's Ames Research Center in California, told BBC News: "I do believe that we will be able to establish a clear correlation between certain earthquakes and certain pre-earthquake signals, in an unbiased way."

Plague is Starting in Africa

Panic has ensued in Madagascar where a recent outbreak of the plague has claimed the lives of at least 24 people. Prime Minister Olivier Mahafaly Solonandrasana has announced a ban on all public gatherings and demonstrations in effect until the outbreak can be contained.
The plague is a deadly disease caused by the Yersinia pestis bacteria. It usually begins as the bubonic plague, which is spread from small mammals (such as rats) and fleas to humans. If detected early, the bubonic plague can generally be treated and controlled with antibiotics and proper environmental measures. However, half of all reported cases in Madagascar are the pneumonic plague –- the deadliest form of the disease.
The pneumonic plague is transmitted person to person. Since this form of the plague is airborne, it spreads extremely rapidly and can have catastrophic consequences. Those who contract the pneumonic plague must be treated immediately as it can be fatal within less than 24 hours of onset.

Health officials in Madagascar are now rushing to identify anyone who has come into contact with those affected. According to the World Health Organization (WHO), those at risk will be treated with antibiotics and possibly quarantined.
Formerly known as the “Black Death,” this is the same plague that claimed the lives of 50 million Europeans during the Middle Ages. The disease first reached Europe in October 1347 and quickly turned into a contagion that destroyed nearly 1/3 of the population.