USGS
No Tsunami Warnings, Advisories or Watches are in effect...a magnitude 6.1 - 17km E of Puerto Morazan, Nicaraguais the 7th major quake of June and the 4th major quake in the last three days. Todays quake is the 72nd, major quake of 2016...

Photo volcano.si.edu A sudden eruption occurred this morning (at 11:35 local time).
An explosion generated an ash plume that rose about 2000 m above the volcano's summit and drifted northwest, causing light ash falls in nearby downwind areas.
According to PHILVOLCS, the eruption preceded by a seismic swarm with more than 100 small earthquakes and lasted 5 minutes.
The eruption itself was only steam-driven - no magma itself has reached the surface,- and caused by explosion of over-pressurized and over-heated fluids from the volcano's strongly developed hydrothermal system.
A similar explosion had occurred on 21 February.
Following it, scientists monitoring the volcano have been seeing an inflation of the edifice (swelling of the ground) since May, probably caused by magma intruding at depth.
This would have been providing new energy (heat) to the system and cause increasing instability. Bulusan's official status remains unchanged at "Alert Level 1 (abnormal)" on the scale of 0 (normal) to 5 (highest):
"This indicates that hydrothermal processes are underway beneath the volcano that may lead to more steam-driven eruptions.
The local government units and the public are reminded that entry to the 4-kilometer radius Permanent Danger Zone (PDZ) is strictly prohibited due to the possibility of sudden and hazardous steam-driven or phreatic eruptions. 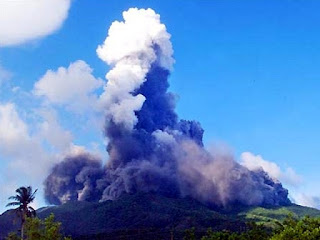 In the last 24 hour two major earthquakes struck along the ominous ‘Ring of Fire’, a week after FEMA started doomsday quake drills.

A 6.1-magnitude hit Nicaragua and a 5.2 -mag. shook Borrego Springs in San Diego County, California.
The U.S. Geological survey said the Nicaraguan earthquake hit Thursday night, with an epicenter 16.1 miles northeast of Chinandega and a depth of 6.2 miles. No casualties were recorded but the newspaper La Presna reported that the walls of a church collapsed in Chinandega.
The quake was felt strongly in Nicaragua’s capital, Managua, 84 miles away,  and Reuters reports it was also felt strongly as far away as Tegucigalpa, the capital of Honduras, 167.7 miles away.
As for the California earthquake, the USGS said it hit around 1:05 am with its epicenter 13.7 miles northwest of Borrego Springs. About 3,000 people reported feeling the earthquake, with residents feeling the earthquake in northern Los Angeles County, Orange and Ventura counties, and the Inland Empire.
These recent quakes along the Ring of Fire — a string of volcanoes and sites of seismic activity or earthquakes around the edges of the Pacific Ocean — come after FEMA began the “Cascadia Rising” drill on June 7th, a drill to simulate the effects of a magnitude-9.0 earthquake along the Cascadia Subduction Zone and an accompanying west coast tsunami dozens of feet tall.
According to the official public statement for the event, more than “50 counties, plus major cities, tribal nations, state and federal agencies, private sector businesses, and non-governmental organizations across three states—Washington, Oregon and Idaho” participated.
In addition to “Cascadia Rising,” U.S. Northern Command held five other exercises simultaneously. According to the final draft of the Cascadia Rising drill plan, those five exercises are entitled “Ardent Sentry 2016,″ “Vigilant Guard,” “Special Focus Exercise,” “Turbo Challenge” and “Joint Logistics Over-the-Shore.” The primary scenario that of all of these participants focused on was one that involves a magnitude 9.0 earthquake along the Cascadia Subduction Zone followed by a giant tsunami that could displace up to a million people from northern California to southern Canada.

USGS Has Once Again been caught trying to cover-up shallow, if not ground level, Earthquakes. This time it Centers around a 5.2 Earthquake that just struck in Southern California. The initial depth reading showed it registered in the Negative or at Ground Level. Even the global Incident map has it at just 1 km. But USGS Decided to go farther than that, and change the depth to a more average number, in the 12 km range. What is also strange about this event is the pattern from the quake swarm. The swarm it showing up in and odd formation, with many quakes hitting on a direct line of a rectangle shaped swarm perimeter.

On top of this we have also had an uptick in earthquakes hitting around the New Madrid Region, Mostly in Kentucky and Tennessee.

USGS has been manipulating quake data for at least several years at this point. Not listing quakes, down grading them, smearing scientists who point this out etc. Very disappointing indeed.
Also you tube has been really removing videos and censoring a whole lot of stuff. They even have been censoring LA Marzulli, and I know poor Jan Markel had been dealing with censorship issues too.
I've been using my free speech a lot lol, since I'm sure I'm already on "the list". Might as well scream it out while I'm still allowed in public. Giggle.
Thank you Scott! I sure hope we go home soon. It's not going to be ok here very much longer....

Yea, they constantly downgrade and/or ignore some quakes...Very perplexing. We have nothing to fear, including any lists - whatever happens it won't be long before the gathering up anyway

Thank you Scott! For all you do. It's going to be really soon. I'm so tired. I'm ready to go home.

Same here - tired and ready.....That pretty much sums it up