Imagine this very real possibility for America in less than 5 months from now. Due to massive civil unrest at both the Democratic and Republican Conventions and 'planned chaos' throughout the nation, Barack Obama has declared a state of emergency and the 2016 general election has been 'postponed'.

Due to the massive unrest that breaks out all across the country, Barack Obama will stay in office for another 2 years until law and order can be restored and another presidential election scheduled and (s)election held. By that point in time, the globalists have maneuvered two of their own candidates into position. Martial law is declared nationwide.

Who 'wins' in such a situation?

Only days ago, the Twitter account of one of the leaders of Black Lives Matter, Deray McKesson, was hacked according to this story from the Baltimore Sun. The account was then used by the hacker(s) to send out pro-Donald Trump tweets while belittling 'Black Lives Matter'.

Interestingly enough, a series of direct message conversations between McKesson and another leader of Black Lives Matter, Johnetta Elzie, has just been made public and the conversation that took place between McKesson and Elzie as seen in the screenshots below should be sending up another huge red flag to America: BLM is working with those inside the Obama administration to stop the November election.

Why else would McKesson and Elzie be talking about the declaration of martial law in America prior to the election being a 'win' for Black Lives Matter? Why would McKesson be talking with Obama attorney general Loretta Lynch about martial law in America and what BLM needs to do to make sure the election is stopped and Trump kept out of office? Not to mention they're being told to push the 'Trump is racist' line. Since when is wanting a country WITH borders 'racist'? These DM tweets tell us the way that BLM and the current administration in DC are headed and it's not good at all for Americans. Much more below including several new video reports on what might be a very difficult summer in 2016 America. 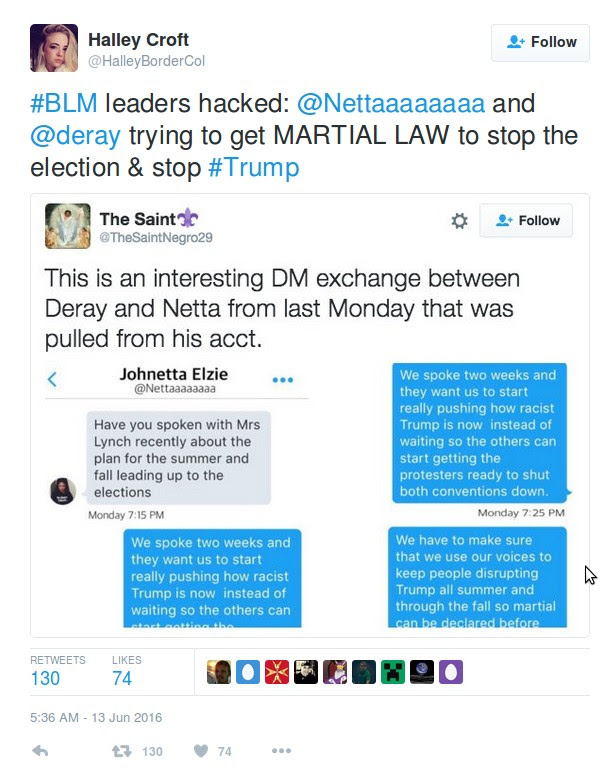 Why would anyone push for martial law? Have they no clue whatsoever of what would happen then or do they think that they are somehow 'insulated' if martial law is declared due to their closeness to the current administration? As we heard from Susan Duclos back in May, we are now witnessing the rise of 'orchestrated terrorism' and as ANP reported back in March of 2016, 'Black Lives Matter' recently put out a 'riot pamphlet' for the Republican National Convention in both English and in Arabic. Are they expecting members of ISIS to be there protesting Trump?

Why are 'paid protests' even allowed to take place in America? As we hear in the next video below, there is now proof that many of these anti-Trump protesters are being paid to do so and there is an awful lot of drama ahead as we head into November.

Will America allow 'black lives matter' and paid protesters to completely disrupt our election cycle in 2016 as we head towards what might be the most important election in our Republic's history? As the Tweets above show us, it may be totally out of our Republic's control if BLM is successful in shutting down the general election in 5 months with help from 'insiders'.

As we hear in the 2nd video below from a person who reads to us an email they recently received from someone who works within government, insiders know that planned chaos awaits America this election season as the globalists try anything that they possibly can to keep an 'America 1st' president out of office. Language warning on this video.

Leaders in the Baltic countries and Poland fear the force NATO plans to deploy on their territory is too small and symbolic to deter an attack by Russia, whose 2014 annexation of Crimea is fresh in the memories of the former Soviet-bloc states.

They will this week press other ministers of the western military alliance to help them build an air defense system against Russian aircraft and missiles. But that would be a highly sensitive step, likely to be condemned by Moscow as yet more evidence of a NATO strategy threatening its borders.

Lithuania, Latvia and Estonia see themselves on the front line in any potential conflict with Moscow and say they are putting their armies on a war footing, meaning they can be mobilized almost immediately.
NATO defense ministers are set to agree this week on a new multinational force of 4,000 troops for the Baltics and Poland.
While the Baltic nations welcome the deployments, they say the build-up must go further - pointing to Russia's efforts to develop an "anti-access" capability in the Kaliningrad exclave bordering Lithuania and Poland, using missiles and submarines to stop NATO moving reinforcements into the Baltics.

Fascism: Embraced by Both Parties

If neoconservatives and progressives truly understood fascism, they would stop using the word as a smear term. That is because both groups, along with most political figures and commentators, embrace fascist ideas and policies.
Fascism’s distinguishing characteristic is a “mixed economy.” Unlike socialists and communists who seek to abolish private business, fascists are content to let business remain in private hands. Instead, fascists use regulations, mandates, and taxes to control business and run (and ruin) the economy. A fascist system, then, is one where private businesses serve politicians and bureaucrats instead of consumers. Does the modern American economy not fit the definition of fascism?

Fascism benefits big businesses that can afford the cost of complying with government regulations, unlike their smaller competitors. Big businesses, which have more political influence then entrepreneurs or small businesses, also significantly benefit from government subsidies. In order to maintain their power, big businesses finance the “deep state” — the network of lobbyists, journalists, think tanks, bureaucrats, and congressional staffers who work behind the scenes to shape government policy.

Obamacare is an example of fascism that is often mislabeled as socialism. Obamacare did not create a government-run “single payer" system as would exist under socialism. Instead, Obamacare extended government control over health care via mandates, regulations, and subsidies. The most infamous part of Obamacare — the individual mandate — forces individuals to purchase a product from a private industry.

Modern America’s militaristic foreign policy aimed at policing and perfecting the world is another example of fascism that enjoys strong bipartisan support. Both right-wing neocons and left-wing humanitarian interventionists claim our supposedly noble goals justify any and all actions taken by the US government. Thus, these supposed human rights champions defend preemptive war, torture, and presidential kill lists.

Mass surveillance and limits on personal freedom are additional hallmarks of fascist regimes. While there is a movement to “reform” the police state, few want to abolish mass surveillance, civil asset forfeiture, police militarization, and other police-state policies adopted in the name of the wars on terror and drugs. The federal government has even used force to stop people from selling raw milk!
Attempts by progressives to silence political opponents are more examples of how many supposedly anti-fascist Americans are embracing fascist policies.
The growth of the welfare-warfare state has been accompanied by an increase in presidential power. This centralization of power, and the support it receives from the political class, is one more indication of the fascistic nature of our current regime. Of course, many in Congress will fight to rein in the executive branch, as long as the occupant of the White House is of the opposing party. Even the fiercest opponents of excessive presidential power instantaneously become lap dogs when their party wins the White House.
For all their alleged anti-fascism, today’s neoconned conservatives and progressives both support the use of force to reshape society and the world. This is the defining characteristic not just of fascists, but also of authoritarians. The true anti-fascists are those who reject the initiation of force. The true path to real free markets, peace, and individual liberty starts with rejecting the bipartisan authoritarianism in favor of the non-aggression principle.

Sigh...All News Pipeline are servants of satan. They are liars and manipulators of the truth to sensationalize, sew panic and fear, and steel peoples time, all for profit. As their evil master, they take a small portion of truth, and build their own fake stories around it. How'd that Jade Helm work out? They used photos they find online, and present them as part of their fake story for example. They even had fake people show up in their comments section trying to justify, and bolster their nonsense. In the particular case when I personally confronted them, they had a Veteran call them out with their fake implications of so called "gathering military vehicles" at Walmart. lol They were busted by the public, on several levels on that story, the satellite photos, the supposed military vehicles etc. When their lies dont come to fruition, then they make up some ridiculous excuse, and come up with the next sensational story. They used for example, a real photo they found online, of a UN tank in Africa, and claimed it was a UN tank in Missouri as part of their "evidence" that the country was being taken over. Pathetic really, and ALL part of what Jesus cl early warned us of regarding the deception of these days...Jesus sent His precious Holy Spirit to dwell within us...and His Holy Spirit prompts us, provides us with discernment in these Last Days...best to listen to His promptings...

Jade Helm waas real, and there were many other sites reporting on this, including the movement of tanks and military vehicles to the southwest - as numerous citizens took videos at various railroad crossings etc...ANP wasn't the only source reporting on this. As far as this news article, this doesn't seem to be a stretch - we'll have to wait and see what unfolds.

As mentioned, we cast a wide net here in terms of news - the reader can discern.

I have come to the conclusion that anything that facebook or YouTube refuses to let me share is most likely true! Lol, besides that, the story was carried by The Baltimore Sun (not that I believe anything any media puts out nowadays)
Thanks Scott for all you do! Im so thankful and grateful for you. Soon my friend soon we are out of here!

YEA, I tend to agree about Facebook etc...I try to stay away from that completely - their true colors are coming out lately...It does seem that the next big step in the progression of events IMO could well be the gathering up...It seems that the presence of the restrainer is the only thing from keeping world events from going off the cliff.