These commentaries have for months been devoted in large measure to examining the building economic bubble that threatens to bring about worldwide cataclysm. I have written on, for example, things like the crisis involving collapsing currencies around the world, which is feared to be creating irreparable cracks in global financial structures.

I was under the illusion that second only to Israel’s position at the center of world controversy; the impending global economic catastrophe has to be the next most profound signal of how near the very end of the age this generation finds us. Jesus, of course, didn’t first specifically mention either Israel or the global economy as being the most significant signs of His return when His disciples asked Him directly. He did, however, mention the subject of this commentary: “And as he sat upon the Mount of Olives, the disciples came unto him privately, saying, Tell us, when shall these things be? and what shall be the sign of thy coming, and of the end of the world?” (Matthew 24:3).

The Lord described a number of things that would be on the world scene at the time He would return to planet earth–or at least above the earth. Among the first signals He mentioned are in the following: “And ye shall hear of wars and rumors of wars: see that ye be not troubled: for all these things must come to pass, but the end is not yet. For nation shall rise against nation, and kingdom against kingdom” (Matthew 24:6-7a).

As prophetically stunning as Israel being at stage-center is the global economic cataclysm looming above this rebellious, judgment-bound planet. The sudden proliferation of potentially world-rending military conflicts on the prophetic horizon is equally astonishing. “Rumors of war” are literally in every direction we look. We will have brief looks at a number of the “rumors of war” presently front and center in the news:

U.S. deploys B-52 bombers to Qatar for fight against Islamic StateThe U.S. Air Force deployed B-52 bombers to Qatar on Saturday to join the fight against Islamic State in Iraq and Syria, the first time they have been based in the Middle East since the end of the Gulf War in 1991. U.S. Air Forces Central Command said it last flew the long-range bombers operationally in the region in May 2006 as part of the war in Afghanistan, and during a U.S.-led military exercise in Jordan in May 2015.

North Korea ‘tests long-range missile engine’North Korea says it has successfully tested an engine designed for an intercontinental ballistic missile. The new type of engine would “guarantee” the ability to launch a nuclear strike on the US mainland, the KCNA news agency said. The test was conducted at the country’s long-range missile launch site near its west coast.

Syria’s Assad shows no willingness to compromise
As the Syria peace talks resume next week, President Bashar al-Assad, backed militarily by Iran and Russia, shows no willingness to compromise, much less step aside to allow a transition Western powers claim is the solution to the conflict.
Rumors of war are indeed rampant upon today’s prophetic horizon. With the impending threats and military preparations, it becomes clear the coming “sudden destruction” of Paul’s forewarning (1 Thessalonians 5:3) cannot be far distant in time. Jesus’ words foretelling what this world faces when the Rapture occurs are starkly in view at this very moment.
“And as it was in the days of Noe, so shall it be also in the days of the Son of man. They did eat, they drank, they married wives, they were given in marriage, until the day that Noe entered into the ark, and the flood came, and destroyed them all. Likewise also as it was in the days of Lot; they did eat, they drank, they bought, they sold, they planted, they builded; But the same day that Lot went out of Sodom it rained fire and brimstone from heaven, and destroyed them all.” (Luke 17:26-29).


After warning last year of a "practically unavoidable" hard-landing to come in China, George Soros unleashed his central-planner-crushing self last night on the great red ponzi. As we noted last night, Soros warned the "parabolic" rise in credit  is very worrisome, and "eerily reminiscent of US in 2007-8," specifically adding that "most of the money that banks are supplying is needed to keep bad debts and loss-makg enterprises alive." Soros' full discussion can be found below...
“Most of the damage occurred in later years," he said according to Bloomberg, referring to the spurt in US growth before the crash.
Simply put - as we highlighted with the shenanigans in the steel industry - China is attempting reflate its economy once again by reviving zombies who have now died twice. This can only end badly, and Soros was not alone in his opinions...

The drone footage that you are about to see is absolutely jaw-dropping.  When I first watched it, I could hardly believe the extent of the devastation that has taken place on Japan’s southern island.  Near the end of last week, a magnitude 6.5 earthquake was quickly followed by a magnitude 7.3 earthquake just 28 hours later.  Those earthquakes made headlines all over the globe, but at first glance those numbers don’t really look that big.  So why was there such tremendous damage?  Well, it turns out that those two major quakes worked in conjunction with more than 600 smaller quakes to cause historic devastation all across Kyushu.  As you are about to see, giant fissures have opened up in the ground right along a fault line that runs directly across Japan’s southern island, and this has a lot of people extremely alarmed.

Once a major disaster falls out of the news, the rest of the world tends to forget about it, but for those on Kyushu this crisis is far from over.  Authorities are still scrambling to rescue those that have been stranded by the recent earthquakes, and at this point it is a race against time…

Survivors of a series of Japanese quakes are struggling with food and water shortages with rescuers digging through mud and rubble for the missing.
Two major earthquakes and about 600 smaller tremors have rocked the south-western island of Kyushu since late Thursday, leaving a total of 46 people dead and more than 1,000 injured, 208 of them seriously.
Many who abandoned their damaged or destroyed homes have had to sleep in temporary accommodation, huddle in makeshift shelters or sleep in their cars, and local media have reported problems in delivering food and other essentials.

In a previous article that I posted a few days ago, I shared a map from the USGS that showed all of the significant earthquakes on Kyushu over the previous week.  As you can see, they formed something of a straight line right across the island…

Earlier today, I went to the USGS website once again and pulled up all of the significant earthquakes on Kyushu over the past week.  So the following map contains the most updated information for the past seven days, and once again we see essentially the exact same formation… 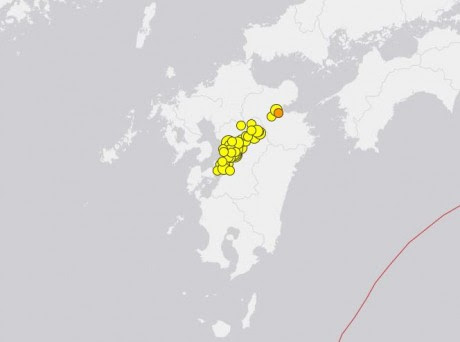 All of these earthquakes have been happening along a major fault line, and there is speculation that Japan’s southern island of Kyushu may be starting to break apart along that fault line.
Of course this kind of thing has happened a lot in the history of our planet, but nobody is quite sure what that might mean for Kyushu.
Are we witnessing the beginning of a process that could take decades to complete, or could it be possible that things might unfold much, much faster than that?

"We have never seen anything like it." Tonnes of fish, including rare species which live offshore in the deep washing up in Vietnam!

A further 3,000 tonnes of dead and rotting sardines have washed up on the banks of river Queule Chile: Sardines in some areas one meter deep

President Recep Tayyip Erdogan has taken control of six churches in the war-torn southeastern city of Diyarbakir in his latest move to squash freedom of speech and religious movement.
The state-sanctioned seizure is just the latest in a number of worrying developments to come out of increasingly hardline Turkey, which is in advanced talks with the EU over visa-free travel for its 80 million citizens.


Included in the seizures are Catholic, Protestant and Orthodox churches, one of which is over 1,700 years old.

They have now effectively become state property - meaning they are run by the government - in a country with a dire human rights record where about 98 percent of the population is Muslim.
The order to seize the churches was made on March 25 by Erdogan's council of ministers, according to the website World Watch Monitor.


They claim it was made on the grounds that authorities intend to rebuild and restore the historical centre of the city, which has been partially destroyed by 10 months of urban conflict between government forces and militants from the Kurdish Workers' Party (PKK).

US To Paint New Pictures On Its Dying, Barbarous Relic of a Currency

Hi there! I've read many posts about drone, and I can tell that yours is very valuable. Different people want different things off their drones. While some want to opt for high quality images and videos, they do not mind compromising on flight time. On the other hand, there are others who prefer having a longer flight time with more acrobatic turn possibilities. See more http://mydronelab.com/best-pick/long-range-drone.html