A further 3,000 tonnes of dead and rotting sardines have washed up on the banks of river Queule Chile: Sardines in some areas one meter deep

A further 3,000 tonnes of dead and rotting sardines have washed up since the 1,000 tonnes removed from the banks of the river Queule, Chile last week. See here
Moreover, some 3,000 tonnes remain on the banks of river Queule.
About 140 tons of rotting sardines have been removed daily by members of the Chilean navy, government officials, fishermen and volunteers Queule Caleta, where the die-off occurred."1,500 tons of dead sardines have been removed from the cove Queule" said a Navy statement released Monday.
A group of Navy divers established that the thickness of the layer of dead sardines in water reach a meter deep in the most critical areas, while on the river bank there are thousands of dead fish."The priority is centered about 3,000 tons of sardines which are still in the banks and river surface Queule" Cristián de la Fuente, maritime governor of the city of Valdivia said.
It should be noted that in recent days the work of teams hired by the municipality was favored by the frontal system that affected the region ,, as many of the fish were at the bottom of the river or the ocean bottom, that according to the National Fisheries Service (Sernapesca) transformed into organic matter.

1,000 TONS of sardines wash up in Araucania Chile.81 turtles washed up dead in Mexico: Thousands of dead sword fish found on Lopes Mendes sands Brazil
Gulf of Mexico red tide toxin causes respiratory problems and coughing fits to beach go'ers this weekend
Government is oblivious to what's going on: What has known as the Seatrout and Redfish Capitol of the world is now the dead fish Capitol of the world: Fish kill Indian River Lagoon Florida

Mystery over a tons of dead fish washing up on shores of Bolivian lake: Equipment to help oxygenate the lake was not working!

As flood waters have covered roadways and more than 1,000 homes have reportedly flooded, authorities have responded to more than 1,200 flooding emergency — and that number is rising along with the flood waters.

The heavy rains caused rivers and creeks to rise, and prevented the low-lying cities drainage system from clearing water fast enough to spare homes from flooding. Reports indicate that the flooding in some spots is comparable, if not worse than, flooding that occurred during Tropical Storm Allison in 2001.

Ecuador earthquake: A megathrust is brewing in India, say experts

A subduction process similar to the one that caused the Ecuadorean quake is happening under the Himalayan region as well, where the Indian plate is getting inside the Chinese landmass. This northward push has been creating a huge amount of tectonic strain in the region, making it particularly prone to earthquakes. “We know there is a huge amount of accumulated strain in this area. It is due for a major earthquake, perhaps a series of earthquakes, bigger than 8 on the Richter scale. That is the kind of energy that is estimated to be accumulated there. This was certainly not one of those earthquakes that is probably imminent.

In terms of energy release, I would say this would not have released even four or five per cent of the energy that is estimated to be stored there,” said Harsh K Gupta, former director of the Hyderabad-based National Geophysical Research Institute and a former member of the National Disaster Management Authority. Scientists believe there is so much energy stored in the area that an earthquake of magnitude greater than 8, possibly even 9, would be needed to release it. This earthquake can come at any time. The Nepal earthquake was a result of this same process, but it was relatively weak in magnitude. –The Indian Express

A Mexican volcano that has been active on and off since 1994 has erupted over Santiago Xalitzintla village in Puebla, Mexico, blanketing the city in dusty, white ash.
The Popocatépetl volcano began erupting around 2.30am on Monday, sending ash two miles into the air.
The eruption sent glowing rock hurling through the air as far as a mile away from the crater.

The plume was so thick it forced Puebla International Airport to close from 7am until approximately 1pm, according to Mexico News Daily.
Civil Protection authorities warned against approaching the volcano.
'It is important to respect the security radius of 12 kilometers (seven and a half miles) due to the danger of incandescent fragments being emitted,' national coordinator Luis Felipe Puente tweeted on Monday.
A webcam pointed at the volcano caught the moment it erupted on Monday morning.
First a bright burst of light appears, whiting out the screen, only to reveal the plume shooting upward and incandescent, blazing lava and rock cascading down the mountain's side.
Dust and ash have settled on the city since the early morning explosion and officials are urging people to wear masks to avoid inhaling the fine grit that has covered houses and cars. 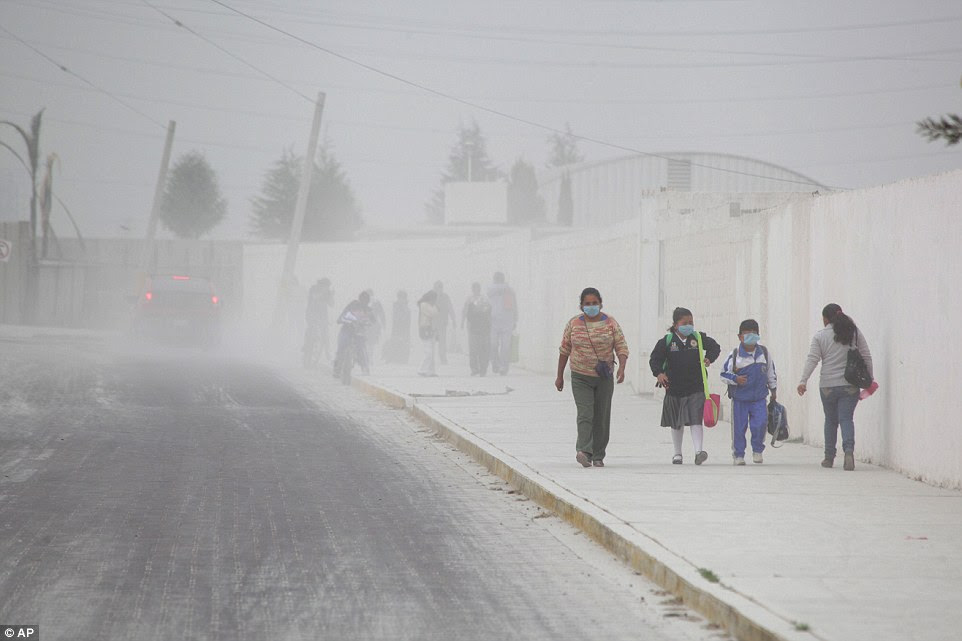 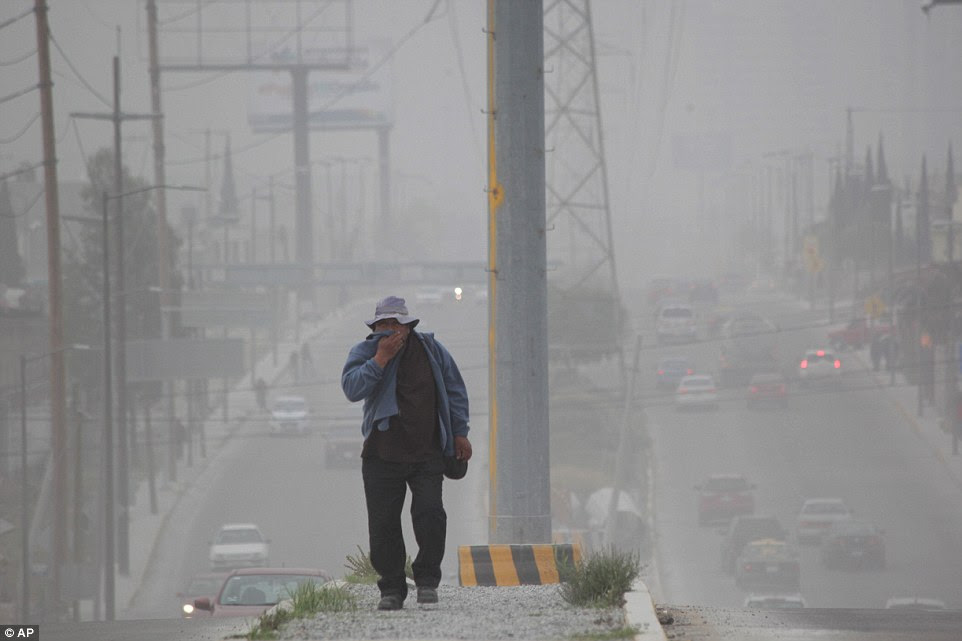 Earthquake-stricken Ecuador faced the grim reality of recovering more bodies than survivors as rescue efforts moved into a third day on Tuesday and the death toll climbed over 400 in the poor South American country.
Praying for miracles, desperate family members beseeched rescue teams to find their missing loved ones as they dug through the debris of flattened homes, hotels, and stores in the hardest-hit Pacific coastal region.
In Pedernales, a devastated rustic beach town, crowds gathered behind yellow tape to watch firemen and police sift through rubble into the night. The town's soccer stadium was serving as a makeshift relief center and a morgue.
"Find my brother! Please!" shouted Manuel, 17, throwing his arms up to the sky in front of a small corner store where his younger brother had been working when the quake struck on Saturday night.
When an onlooker said recovering a body would at least give him the comfort of burying his sibling, Manuel yelled: "Don't say that!"
But for Manuel and hundreds of other anxious Ecuadoreans with relatives missing, time was running out.
As of Tuesday, rescue efforts would become more of a search for corpses, Interior Minister Jose Serrano told Reuters. The death toll stood at 413, but was expected to rise.
The quake has injured at least 2,600 people, damaged over 1,500 buildings, and left 18,000 people spending the night in shelters, according to the leftist government.

Why do so many earthquakes strike Japan?

A magnitude-7.0 earthquake struck southern Japan late last week, less than two days after a 6.2-magnitude temblor rocked the same region, triggering tsunami advisories in the area.
The most recent earthquake struck the Kumamoto region on Japan's Kyushu Island early Saturday, April 16 at 1:25 a.m. local time (12:25 p.m. ET on April 15), according to the U.S. Geological Survey (USGS). The smaller 6.2-magnitude quake on Thursday, April 14, killed nine people and injured hundreds more, reported CBS News.
With residents of the Kumamoto region reeling from two sizable earthquakes in as many days, and with memories of the massive 9.0-magnitude earthquake and tsunami that devastated Tohoku, Japan, in 2011 not far from people's minds, what is it about this part of the world that makes it so seismically active?

For starters, Japan is located along the so-called Pacific Ring of Fire, which is the most active earthquake belt in the world. This "ring" is actually an imaginary horseshoe-shaped zone that follows the rim of the Pacific Ocean, where many of the world's earthquakes and volcanic eruptions occur.
Within the Ring of Fire, several tectonic plates -- including the Pacific Plate beneath the Pacific Ocean and the Philippine Sea Plate -- mash and collide.
"The Earth's surface is broken up into about a dozen or so major chunks that are all moving around. Where they all interact at their edges, interesting things happen," said Douglas Given, a geophysicist with the USGS in Pasadena, California.
The latest earthquake seems to have been caused by the Philippines Sea Plate diving underneath the Eurasia Plate, according to Paul Caruso, a geophysicist with the USGS.
While Japan is no stranger to earthquakes, the 7.0-magnitude temblor is one of the largest ever recorded in this part of southern Japan, Caruso told Live Science.
"The second-largest was probably on March 20, 1939 -- there was a magnitude-6.7 in this area. And we've had magnitude-6.5 and magnitude-6.3 earthquakes, but this is the largest quake that has been measured in that vicinity," he said.

Japanese authorities and scientists at the USGS will be monitoring the area for potentially dangerous aftershocks, which are smaller quakes that follow the largest event in a series and that generally decrease in strength.
"This seems to be a pretty energetic sequence, and there are lots of large aftershocks," Given told Live Science. "And of course, after a large earthquake, structures are often weakened as a result. Additional damage can be expected."
Residents of the area should expect more shaking in the coming days, according to Caruso.
"We can say for certain that there are going to be more aftershocks in this area," he said. "Exactly when and how big they're going to be is difficult to say, though. No one can predict that."

Oh geepers....I lived through one of those Houston frog-chokers of a thunderstorm before. Remember when the waters receded a bit we could tell where the intersections were by the top of the stop sign that emerged or under the red lights. Remember being so impressed with the VW Beatle..... when everything else had sunk, they were still floating around.

When the water was down to chest height, you could get out and try walking....but watch out. All the snakes were swimming and looking for anything to attach to.

And that was just 8 inches in an hour or two.

Caver, I know exactly what you mean. I was in Houston this weekend for a wedding; and finally got back last night (just in time to vote for the nincompoop of my choice here in the NY Primary); and saw first hand the devastation. My brother had no problems where he lives; but other parts of the city was just chaos. Give me a Buffalo snowstorm any time. All this plus all the recent earthquakes goes to show you that no matter where you live, you'll have weather issues which will not disappear until our gettogether at the Tree of Life. Come quickly Lord Jesus!