'A Totally Corrupt, Rigged System': Mark Twain: 'If Voting Made Any Difference, They Wouldn't Let Us Do It'

First, Colorado changed the rules in order to hand all of its delegates over to Ted Cruz without a traditional primary vote, then told the people, “It’s the rules” (after they were changed without explanation).
The Colorado GOP even Tweeted this before deleting it and blaming hackers. 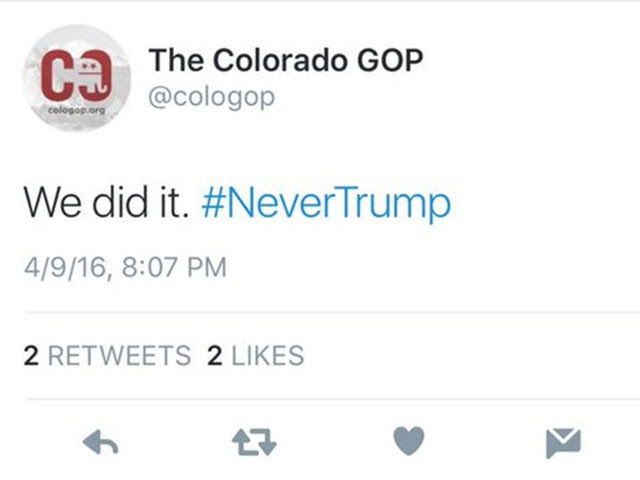 Now the GOP in Indiana and Wyoming are plotting similar ways to ensure Trump doesn’t get any of their delegates.

In a meeting behind closed doors yesterday, GOP party leaders met in Indiana to select 21 delegates that are expected to be anti-Trump, even though voters don’t get to vote for another three weeks in the state, according to Bloomberg News.
This is the same process which occurred in Colorado, where delegates are chosen for candidates ahead of an actual primary election by GOP voters, essentially nullifying votes.
A similar situation is expected to follow in Wyoming, where 14 delegates are chosen at the state primary’s convention, the majority of which are reportedly anti-Trump.

Trump even wrote an op-ed in the Wall Street Journal this week titled, “Let Me Ask America a Question: How has the ‘system’ been working out for you and your family? No wonder voters demand change”:

I, for one, am not interested in defending a system that for decades has served the interest of political parties at the expense of the people. Members of the club—the consultants, the pollsters, the politicians, the pundits and the special interests—grow rich and powerful while the American people grow poorer and more isolated…
Responsible leaders should be shocked by the idea that party officials can simply cancel elections in America if they don’t like what the voters may decide.
The only antidote to decades of ruinous rule by a small handful of elites is a bold infusion of popular will. On every major issue affecting this country, the people are right and the governing elite are wrong…

A similar disenfranchisement is taking place on the Dem side, with Bernie sweeping state to state and still leaving primaries with less delegates than Hillary Clinton.

See how this works? 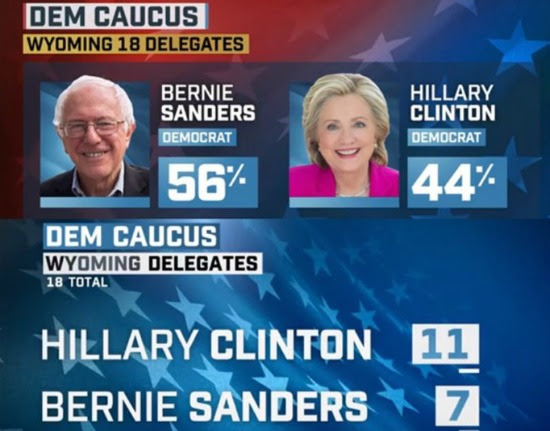 This isn’t even about who you would personally support in this election. It’s about the fact that the people really don’t have an election.

It’s looking more and more like the system is actually pushing for Trump to split the GOP, a move which would ultimately hand the whole thing to Hillary because angry Bernie supporters will unify behind her just to try and make sure Trump doesn’t win. The people who would actually vote for Cruz don’t seem to care how rigged and corrupt the system is only because it’s being rigged in favor of their guy… as if that somehow makes it okay that they are voting within a totally rigged system.

Have I said it enough? The system is clearly rigged, with mass protests against unfair election protests at Capitol Hill now being blacked out by the mainstream media so more people don’t catch on to the fact that our votes in presidential elections do not even remotely matter.
The question is how much longer are Americans going to continue to put up with this?
It has been made blatantly obvious the entire election process is a complete sham.
It’s like Mark Twain said, “If voting made any difference they wouldn’t let us do it.”

A planned vote had been canceled. And one million Republicans in Colorado were sidelined.
In recent days, something all too predictable has happened: Politicians furiously defended the system. “These are the rules,” we were told over and over again. If the “rules” can be used to block Coloradans from voting on whether they want better trade deals, or stronger borders, or an end to special-interest vote-buying in Congress—well, that’s just the system and we should embrace it.
Let me ask America a question: How has the “system” been working out for you and your family? - Donald Trump op-ed at Wall Street Journal, April 14, 2016

We have seen and published a number of videos and letters to the RNC, statements from life-long Republicans who are burning their voters cards in protest, telling the RNC and its Chairman Reince Priebus that they are sick and tired of the political establishmentattempting to overturn the will of the people after the events in Colorado where a million voters were sidelined as they cancelled their election and party officials "selected" who the state's delegates would go to without any votes cast from the public.

The RNC has gone on full attack against Trump telling him to "learn" the delegate process, which can be clearly understood by the words of a North Dakota unbound delegate Curly Haugland when he blamed the media for the "perception that the voters choose the nomination," asserting that "The rules are still designed to have a political party choose its nominee at a convention."Those are the "rules" of the system that the RNC and Mr. Piebus want voters to simply accept, right or wrong, because those "rules" allow the power-hungry players in Washington, the political establishment "elite" to determine who will be the eventual nominee, rather than the voters themselves. Those "rules" and the "selection" by the RNC in 2008 and 2012 are the reason Conservatives were forced to "hold their nose" and vote Republican because they couldn't fathom the Democratic candidate, as many others simply stayed home

, handing victory to Barack Obama.The problem for the political establishment, led by Mr. Priebus this election cycle is they have a candidate they cannot control, one who has exposed the corruption leading to the very top, including Mr. Priebus himself as he finally revealed his true colors by telling Republican voters  "If you don't like the party, then sit down. The party is choosing a nominee." 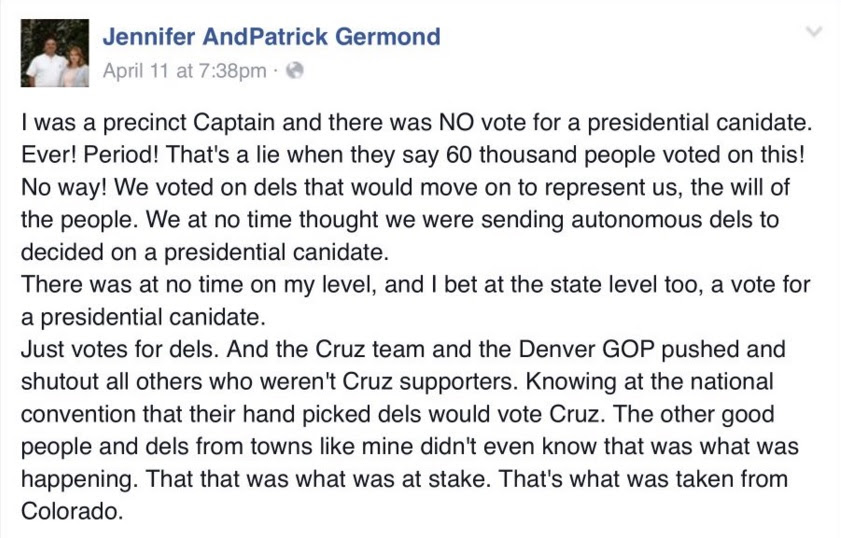 Minority leader and former Speaker fo the House Nancy Pelosi, has predicted the "implosion" within the GOP, stating "If they reject the public will, they will really hand us a bigger victory than I'm even anticipating now, because that will be an implosion of the Republican Party."It pains me to say I agree with her since there is barely anything I have ever agreed with her on, but I would suggest Ms. Pelosi turn her eye to the Democrats' Super-Delegate "system" and "rules," which is doing the same thing to Democratic Bernie Sanders voters as the RNC establishment is doing to Republican voters.The RNC in their panic, is busy highlighting that the change of rules in Colorado happened in August (After Trump announced his candidacy in June), so according to them folks should just understand that is the way it is and deal

with it...... without the GOP party officials understanding it is the fact that the "rules" could be changed at all, literally bypassing voters themselves, that has become "the straw that broke the camel's back," leading to protest being held today in Colorado, where disenfranchised voters are gathering peacefully to demand "Colorado give the power to vote in the Presidential Primary to the voters. We will exercise our right to assemble and peacefully protest the corruption of the Colorado GOP and disenfranchisement that we the voters have suffered."Interest has been so overwhelming that we see the following update to the planned protest, via Infowars:Organizers for the event announced this morning that due to overwhelming interest they have switched venues.

Responsible leaders should be shocked by the idea that party officials can simply cancel elections in America if they don’t like what the voters may decide.
The only antidote to decades of ruinous rule by a small handful of elites is a bold infusion of popular will. On every major issue affecting this country, the people are right and the governing elite are wrong. The elites are wrong on taxes, on the size of government, on trade, on immigration, on foreign policy.
Why should we trust the people who have made every wrong decision to substitute their will for America’s will in this presidential election? - Donald Trump op-ed at Wall Street Journal, April 14, 2016

By the numbers and the overwhelming amount  of states Trump has already won by popular vote in comparison to the other candidates, along with the projected Trump 'landslide for NY' headlined by Politico, in conjunction with his high polling numbers for the other upcoming April contests, one would justified in wondering why the Republican leadership

, headed by Reince Priebus, is doing everything in their power to alienate and disenfrachise the party faithful, voters they will need if they want any hope of winning

the general election in November.

THIS IS GOING TO GET MUCH UGLIERIf Colorado was the straw that may have broken the came's back, then the next tidbit of news may just cause an uprising against the Republican party of unprecedented scope.Via Biz Pac Review:
And just yesterday, BizPac Review reported how the delegate system in Colorado changed in March in an effort to strip Trump of delegates, despite Republican National Committee (RNC) spokespersons claiming otherwise.
What occurred in Colorado, though, is just a fraction of what is yet to come in the next month.

In a meeting behind closed doors yesterday, GOP party leaders met in Indiana to select 21 delegates that are expected to be anti-Trump, even though voters don’t get to vote for another three weeks in the state, according to Bloomberg News.
This is the same process which occurred in Colorado, where delegates are chosen for candidates ahead of an actual primary election by GOP voters, essentially nullifying votes.
A similar situation is expected to follow in Wyoming, where 14 delegates are chosen at the state primary’s convention, the majority of which are reportedly anti-Trump.

While I am not a Ted Cruz supporter, had Cruz won 21 primaries and was as far ahead in all the polling for the next set of primaries compared to Trump only winning 9, in other words if the results

were reversed, I would still be just as outraged over the party antics if they were doing to Cruz what they are doing to Trump..... when "we the people" are ignored, disenfranchised and when the party leadership dares tell them to "sit down" and informs us "they" will select the nominee rather than voters "electing" the nominee...... it is time to stand up, be heard and RISE up against a "system," and "rules" clearly meant to overturn the will of the people that elected these arrogant power-hungry, corrupt politicians.If we do not unite against the GOP now when they are openly and blatantly informing us that our vote doesn't count at all.... when will we?

Hummmm....Don't personally remember this one but didn't they try something like this before...a tea tax up in Boston. How did that work out for them?

Holy - its my pleasure thank you so much God bless