World On Cusp Of 'Post-Antibiotic Era'

The world is on the cusp of a "post-antibiotic era", scientists have warned after finding bacteria resistant to drugs used when all other treatments have failed.
They identified bacteria able to shrug off the drug of last resort - colistin - in patients and livestock in China.
They said that resistance would spread around the world and raised the spectre of untreatable infections.
It is likely resistance emerged after colistin was overused in farm animals.
Bacteria becoming completely resistant to treatment - also known as the antibiotic apocalypse - could plunge medicine back into the dark ages.

Common infections would kill once again, while surgery and cancer therapies, which are reliant on antibiotics, would be under threat.

Chinese scientists identified a new mutation, dubbed the MCR-1 gene, that prevented colistin from killing bacteria.
The report in the Lancet Infectious Diseases showed resistance in a fifth of animals tested, 15% of raw meat samples and in 16 patients.

And the resistance had spread between a range of bacterial strains and species, including E. coli, Klebsiella pneumoniae and Pseudomonas aeruginosa.
There is also evidence that it has spread to Laos and Malaysia.
Prof Timothy Walsh, who collaborated on the study, from the University of Cardiff, told the BBC News website: "All the key players are now in place to make the post-antibiotic world a reality.
"If MCR-1 becomes global, which is a case of when not if, and the gene aligns itself with other antibiotic resistance genes, which is inevitable, then we will have very likely reached the start of the post-antibiotic era.
"At that point if a patient is seriously ill, say with E. coli, then there is virtually nothing you can do."

Resistance to colistin has emerged before.
However, the crucial difference this time is the mutation has arisen in a way that is very easily shared between bacteria.
"The transfer rate of this resistance gene is ridiculously high, that doesn't look good," said Prof Mark Wilcox, from Leeds Teaching Hospitals NHS Trust.
His hospital is now dealing with multiple cases "where we're struggling to find an antibiotic" every month - an event he describes as being as "rare as hens' teeth" five years ago.
He said there was no single event that would mark the start of the antibiotic apocalypse, but it was clear "we're losing the battle". 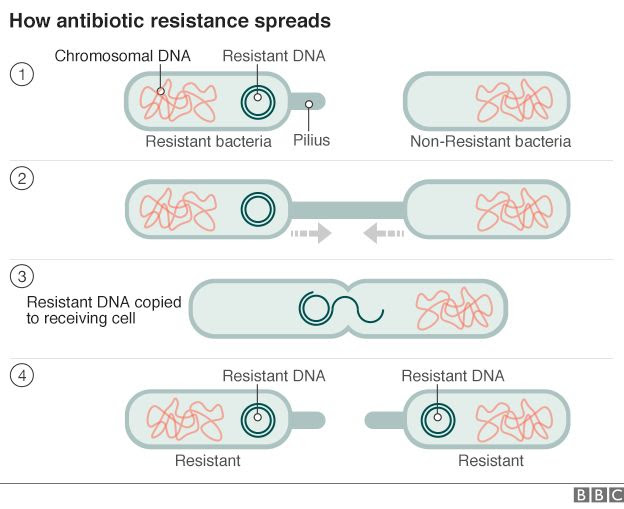 The concern is that the new resistance gene will hook up with others plaguing hospitals, leading to bacteria resistant to all treatment - what is known as pan-resistance.
Prof Wilcox told the BBC News website: "Do I fear we'll get to an untreatable organism situation? Ultimately yes.
"Whether that happens this year, or next year, or the year after, it's very hard to say."
Early indications suggest the Chinese government is moving swiftly to address the problem.
Prof Walsh is meeting both the agricultural and health ministries this weekend to discuss whether colistin should be banned for agricultural use. 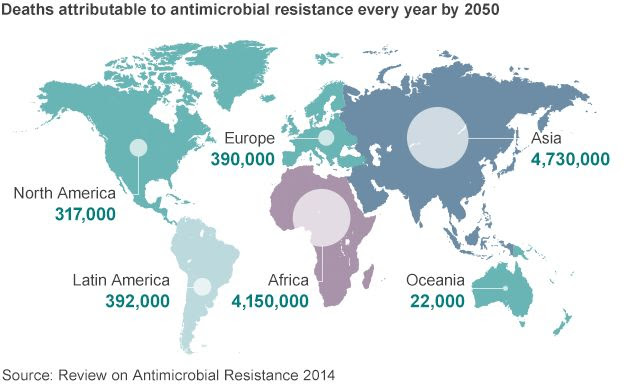 Prof Laura Piddock, from the campaign group Antibiotic Action, said the same antibiotics "should not be used in veterinary and human medicine".
She told the BBC News website: "Hopefully the post-antibiotic era is not upon us yet. However, this is a wake-up call to the world."
She argued the dawning of the post-antibiotic era "really depends on the infection, the patient and whether there are alternative treatment options available" as combinations of antibiotics may still be effective.
New drugs are in development, such as teixobactin, which might delay the apocalypse, but are not yet ready for medical use.
A commentary in the Lancet concluded the "implications [of this study] are enormous" and unless something significant changes, doctors would "face increasing numbers of patients for whom we will need to say, 'Sorry, there is nothing I can do to cure your infection.'"

Scott thanks for posting stuff like this. I could rant on this for hours because I know how hard it is for hospitals to eradicate bacteria. Look how many people MRSA alone has killed in the past 20 years. The combination of factory farming, unnecessary antibiotic therapy, unfinished antibiotic treatment (when people don't finish their prescribed course of antibiotics) and the natural affinity of bacteria to mutate creates a cauldron of disaster.
Plus we have killed off so many "good" bacteria by these practices that they are no longer available to help us.
Anything external, I go straight to colliadal silver nowadays. After catching MRSA at the local ER a few years ago and going thru several useless antibiotics I finally got rid of it using silver.
Another problem is medical staff not following infectious protocol. Simple things like washing hands between patients, not touching trash can lids etc
And it's always ok to ask your nurse or doctor to wash their hands before touching you, drawing blood etc. If they give you any grief at all about it, just be lighthearted in your delivery and say something like "it's nicer to wash your hands than get sued or have a patient die" sometimes they get so busy they forget what disasters can occur.