There is no denying it now - this whole episode is escalating rapidly and with each new revelation things are becoming more and more unstable:

Russian president Vladimir Putin has accused the U.S. of being complicit in the destruction of its military jet two days ago - suggesting the Americans knew exactly when and where it was travelling.
In a press conference at the Kremlin tonight, Putin said the Russians had given prior information to the U.S. of the flight path of the plane - but the U.S. had 'leaked' the information to Turkey.
In other developments, Putin's dreaded S-400 anti-aircraft missile systems - mobilised in the wake of the jet's destruction - were photographed being unloaded from military transports in Syria.
He also vowed to join France in coordinating bombing campaigns against ISIS forces and agreed to share intelligence information.

Putin told gathered media: 'The American side, which leads the coalition that Turkey belongs to, knew about the location and time of our planes' flights, and we were hit exactly there and at that time.

Ahead of the conference, Putin and Turkish President Recep Tayyip Erdogan traded barbs, with the Russian leader saying he was waiting for an apology and Erdogan ruling out any such move.
Putin has dismissed as 'rubbish' Turkey's claim that it would not have shot down the jet if it had known it was Russian.

'They [our planes] have identification signs and these are well visible. Instead of... ensuring this never happens again, we are hearing unintelligible explanations and statements that there is nothing to apologise about.'

Meanwhile, Vladimir Putin's feared S-400 anti-aircraft battalions have landed in Syria ready to destroy any threats to his airforce.

The surface-to-air missile systems are capable of striking down targets up to 250miles away and were instantly deployed to the region in the wake of Tuesday's confrontation.
Pictures emerged today of the state-of-the-art missile systems' arrival to the battlefields of Syria, while the war of words between Putin and Erdogan intensified. 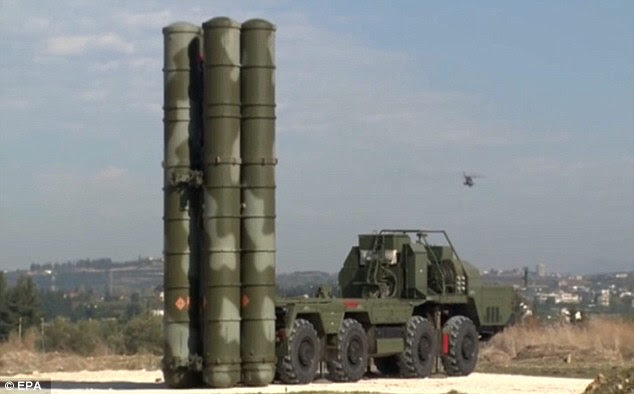 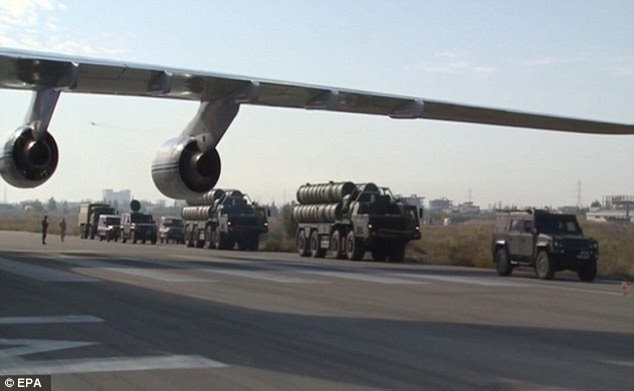 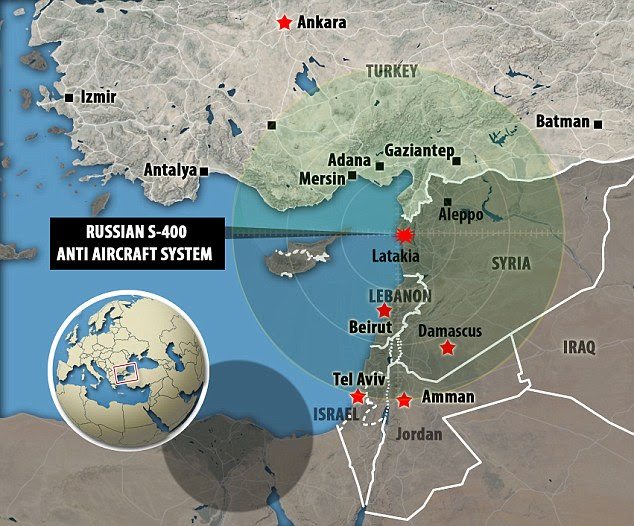 The S-400s are based in Syria's coastal province of Latakia, just 30miles from the border with Turkey and are capable of striking targets a huge ranges with deadly precision.
Today Putin defended his decision to mobilise the weaponry after the attack by Turkey which he considered a betrayal.

He also justified his decision to deploy new weapons systems to Syria, namely the state-of-the-art S-400.

'We did not have those systems in Syria [previously] because we believed that our airforce was working at an altitude which would not be reachable by terrorists.
'They do not have this equipment capable of shooting down the aircraft at 3,000 to 4,000 metres.
'If we thought of this before, we would have established the systems capable to protect our aircraft.

The S-400's range means its missiles could reach deep into Turkey or pose a potential threat to US-led coalition planes - adding yet another dangerous element to an already volatile mix of competing military interests in Syria.
'It's a capable weapons system that poses a significant threat to anyone,' a US official speaking on condition of anonymity told AFP. 'There are significant concerns related to air operations in Syria.'

Accusations flung back and forth from both Russia and Turkey in the wake of the confrontation have further aggravated the situation.
While Russia today launched a swathe of initiatives designed to hurt Turkey's economy, it also accused the country of purchasing oil from ISIS - a charge Turkey vehemently denies.
Turkish president Recep Tayyip Erdogan lashed out at the claims, calling them slanderous.
He said: 'They claim Turkey is buying oil from [ISIS]. Shame on you. Those who claim we buy oil from Daesh are obliged to prove it. If not, you are a slanderer.'

Watchman’s Alert: On The Brink Of War

I know it’s thanksgiving, but there are things developing that we must pay attention to.  I just watched a news conference with President Hollande of France and Putin. France has sent the Charles de Gaulle warship, this in itself is major.

Charles de Gaulle is the flagship of the French Navy (Marine Nationale) and the largest western Europeanwarship currently in commission. She is the tenth French aircraft carrier, the first French nuclear-powered surface vessel, and the first and so far only nuclear-powered carrier completed outside of the United States Navy. She is named after French statesman and general Charles de Gaulle.

They are pledging to work together in Syria to rid the world of the Daesh.  They pledged to share intelligence, and to only hit Daesh targets.  They announced that the UK would soon follow, and I watched Cameron as he was selling it to Parliament.  Germany has announced it would send war planes to help.  Jordan’s King Abdullah visited Moscow 2 days ago and pledged his support even calling Putin a dear brother.

We are on the brink of destruction, and it’s important for us to know it’s prophecied, it’s time to watch.  It’s time to prepare.  (Revelation 9:13-21)

Turkey has attempted to destroy and divide NATO with it’s latest attack on Russia, downing their plane and the Turkmen killing the pilot as they parachuted to safety.  But instead of dividing NATO they have caused alliances that will not be detered or divided.  So everyone is asking “what do we do about Turkey?”  Obama seems to be the only leader who is still defending them.
The world leaders and powers are circling the wagons and entering into agreements that will bring the world further into WWlll.  Battle lines are being drawn, and strategies planned.
Prophecy really is unfolding rapidly.  Pray for God’s mercy on a country that has turned it’s back on God and His people.  It’s time to study the word, the events unfolding today are a clear picture of prophecy in the Bible.
While the people of the world are fixed on a Migrant crises created by the UN, the fires raging in the middle east are beyond quenching.  Iran has performed a mock takeover of Jerusalem and the Ayatollah just announced that they would throw all their support, anything needed to the Palestinians to fight against Israel in their intifada.  Things will continue at a rapid pace.
And Jesus said:
And what I say unto you I say unto all, Watch. Mark 13:37

Even though many facts surrounding the downing of the Russian Su-24 are still up for debate, those that are known for certain are already very alarming. Taking into account the recent events, US President Barack Obama should reconsider some aspects of his foreign policy, a Huffington Post columnist wrote.

Turkish president Tayyip Erdogan is probably the most dangerous person on Earth at the moment, the news blog stated. Already notorious for manipulating Turkish society prior elections, he also has the reputation of a politician that makes imprudent announcements when it comes to foreign policy. On November 24, 2015 Erdogan brought his imprudence to another level by ordering his air force to attack a Russian bomber, the columnist wrote.

Ankara claims that the Russian plane didn't violate Turkish airspace for longer than 17 seconds. American media also stated that the Su-24 was already on the Syrian territory when it was downed, citing American authorities. These mere facts are enough to conclude that the attack was planned.

"In other words, President Erdogan had apparently ordered his country's air force to destroy a Russian military aircraft as soon as a pretext emerged," the Huffington Post stated.

The most believable explanation of Erdogan's decision would be an attempt to hinder the possibility of creating a bigger coalition against the self-proclaimed Islamic State, which would include US, France and Russia. Following terrorist attacks in Paris and the A321 tragedy, the French President Francois Hollande saw an opportunity of a new major alliance in the fight against terrorism.

"Irrespective of Erdogan's immediate objective, his reckless decision has perhaps put the entire planet on the path towards an unintended but potentially devastating war," the columnist wrote. "Not only the shootdown, but the barbaric murder of one of the parachuting Russian pilots by Turkey's allies in Syria — an act that is in clear violation of the Geneva Convention — will inevitably stimulate great indignation among the Russian people. "

According to the news blog, in context of the current geopolitical situation, the incident is in a way related to the assassination of the Austro-Hungarian crown prince in 1914 which led to the beginning of the first world war. The Huffington Post noted that Turkey is a member of NATO and already called for its backing in case of Russia's military countermeasures.

"Alarmingly, President Obama has already expressed public support for Turkey's right to defend its airspace," the columnist wrote.
"Before Turkey's recklessly irresponsible leader drags the United States into an unintended military confrontation with Russia over events in Syria, President Obama should reconsider his blanket support for Turkey's belligerent and brazen acts of violence against Moscow, and make clear that the United States — and NATO — will not be dragged into a conflict with Moscow over Erdogan's dangerous adventurism."

Another little tidbit arguing in Russia's favor, the length of time the Russian aircraft was supposedly in Turkish airspace and the width of Turkey at that point. For it to have taken the aircraft that long to traverse that little ribbon of land the aircraft would have had to be flying below stall speed. It wasn't.

Don't remember the source on this but I believe it was an Israeli source this morning.