13:55 IDF issues further statement on Gaza border clashes
"The IDF estimates about 17,000 Palestinians in five locations along the fence, burning tires, and throwing Molotov cocktails and stones at the fence and at IDF troops who are responding with riot dispersal measures and shooting at a number of key instigators."The IDF prepared in advance with reinforcements and is prepared to act in various scenarios. We will not allow any violation or harm to Israeli sovereignty or defensive infrastructure such as the border fence"The Hamas terror organization endangers the residents of the Gaza Strip and uses them as cover for terrorist acts. Hamas is responsible for all the events and their consequences."

12:10 The IDF issues a statement on the situation on the Gaza border
"Thousands of Palestinians are present in six clusters along the border. The Palestinians have set fire to tires and are hurling rocks at the border fence and toward IDF troops. The forces are responding using riot dispersal measures and accurate fire targeting ringleaders.In light of the security assessment, the IDF has declared the area as a closed military zone. Any activity in the region requires IDF permission. There are no special instructions to citizens.The IDF had prepared in advance with large forces and is prepared to respond to various developments. We will not allow a breach of our sovereignty or harm to the border defences. The Hamas terror organisation is endangering the residents of Gaza and using them as cover for terror activities. Hamas alone bears responsibility to all events and their ramifications."

Four Palestinians were killed and some 370 were wounded by Israeli rubber bullet and live fire in the Gaza Strip on Friday, as a series of massive protests kicked off along the security fence surrounding the enclave, Palestinian sources said.
The Israel Defense Forces estimated that 17,000 Palestinians were taking part in “March of Return” demonstrations along the Gaza border, spread out among the five main protest sites.
The Hamas-run Gaza health ministry reported that four men were killed during the mass protests along the border, bringing the toll death toll on Friday to four. Some 370 were injured as of 2:30 p.m., with most of the injuries being caused by rubber bullets and tear gas. A smaller number were hit by live fire.

The army confirmed that soldiers had shot at “main instigators.” It said some protesters were lighting tires on fire and throwing Molotov cocktails and rocks at IDF troops on the other side of the border.

The military maintained that it would not allow Palestinian protesters to “violate Israel’s sovereignty” by crossing the security fence.

The main sites for protests in Gaza were Rafah and Khan Younis in the south, el-Bureij and Gaza City in the center, and Jabalya in the northern portion of the coastal enclave.

Earlier Friday morning, a Palestinian farmer was killed by Israeli tank fire near Khan Younis in the southern Gaza Strip, the Hamas-run health ministry said. Witnesses said he was working his land near the border when the shells hit, but Hadashot news reported that the army suspected the man had been trying to place an improvised explosive device near the security fence.

Via through social media, leaflets dropped from airplanes and statements to news outlets, Israeli officials have repeatedly warned Palestinians not to try to breach the security fence during the protests.
On Friday, the army stationed additional infantry battalions and more than 100 snipers along the border in order to prevent that from happening. The Border Police and Israel Police also sent additional forces to southern Israel in order to act as a secondary defense line in case Palestinians made it past the soldiers along the border.
The IDF declared the area around the Israeli side of the Gaza border a “closed military zone,” forbidding Israeli civilians from getting close without army permission. 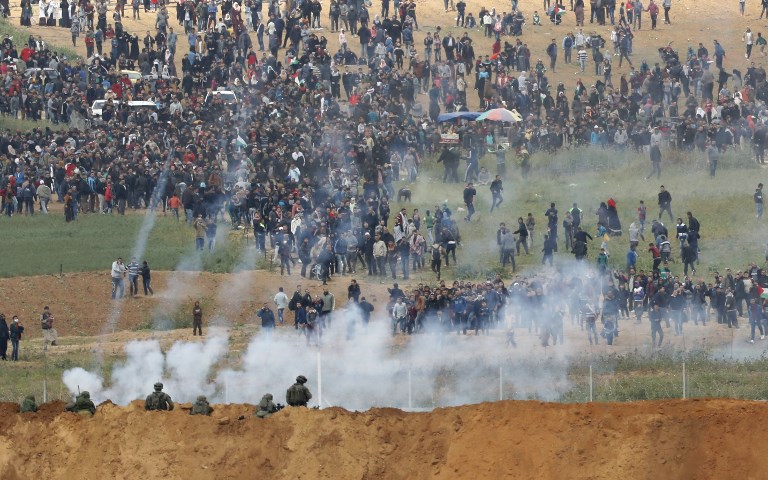 IDF Chief of Staff Gadi Eisenkot was leading the army’s riot control operation, with assistance from the head of the Southern Command Maj. Gen. Eyal Zamir, the head of IDF Operations Maj. Gen. Nitzan Alon, and Israel’s military liaison to the Palestinians, Maj. Gen. Yoav Mordechai.
The army said it held the Hamas terror group responsible for any violence that takes place along the Gaza security fence during the protests and for the “consequences” of it.
Over the past few days, Palestinians in Gaza have pitched tents near the volatile border with Israel ahead of the planned six-week “March of Return” protest that began on Friday.

The protest comes amid rising tensions as the United States prepares to move its embassy in Israel to Jerusalem.
Organizers said it would be peaceful but Israeli officials were wary of a fresh flareup along the enclave’s border.
Defense Minister Avigdor Liberman warned on Friday that any Palestinians from Gaza approaching the security fence with Israel were putting their lives at risk.
“Those who approach the fence today are putting themselves in danger,” Liberman said in his post. “I would advise [Gazans] to go on with your lives and not engage in provocations.”
The first protest kicked off on Friday, when Palestinians worldwide mark Land Day, which commemorates the Israeli government’s expropriation of Arab-owned land in the Galilee on March 30, 1976, and ensuing demonstrations in which six Arab Israelis were killed. It is also, by coincidence, the eve of the week-long Passover festival.

Camping and protests in Gaza are expected to continue until mid-May, around the time the US is set to inaugurate its new embassy in Jerusalem.
Mid-May will also mark the anniversary of what Palestinians call the Nakba, or catastrophe, which saw hundreds of thousands of Palestinians flee their homes during Israel’s 1948 War of Independence.
According to the United Nations, some 1.3 million of Gaza’s 1.9 million residents are refugees or their descendants.
Friday’s demonstrations mark the beginning of the Palestinians’ return to all of Palestine, Hamas leader Ismail Haniyeh said in a speech at the scene of the mass protests in the Gaza Strip.

“We are here to declare today that our people will not agree to keep the right of return only as a slogan,” he said. Haniyeh added that the March of Return was also aimed at sending a message to US President Donald Trump to the effect that the Palestinians will not give up their right to Jerusalem and “Palestine.”

Khaled al-Batsh, the leader of the Iran-backed Islamic Jihad terror group, which is also among the planners of the protest, said tents would be located 500 meters from the border, just outside the buffer zone between Gaza and Israel.

Batsh said protesters were calling for Palestinians to be allowed to return to land that is now inside Israel. “Seventy years ago we left and today we have decided to return to our country,” he told AFP.

No Israeli government would ever be likely to accept this demand, since it would spell the end of Israel as a Jewish-majority state. Israel’s position is that Palestinian refugees and their descendants would become citizens of a Palestinian state at the culmination of the peace process, just as Jews who fled or were forced out of Middle Eastern countries by hostile governments became citizens of Israel.

Hamas leader: Protests mark the beginning of our return to 'all of Palestine’

Demonstrations Friday along Israel’s border with the Gaza Strip mark the beginning of the Palestinians’ return to “all of Palestine,” Hamas leader Ismail Haniyeh said in a speech at the scene.
“We are here to declare today that our people will not agree to keep the ‘right of return’ only as a slogan,” he said. Haniyeh added that the so-called “March of Return” was also aimed at sending a message to US President Donald Trump to the effect that the Palestinians will not give up their right to Jerusalem.

The Times of Israel is liveblogging Friday’s developments as they unfold.

The Hamas-run Gaza health ministry says a fifth Palestinian was killed by Israeli gunfire during violent protests along the security fence in the northern Gaza Strip.