Earlier in the week we reported on scientists' warnings over the "strained" magma chamber within Yellowstone's supervolcano.

And now, perhaps even more concerning, The Daily Express reports that scientists in California have analyzed 101 major earthquakes around the Pacific Ring of Fire, a horseshoe-shaped geological disaster zone, between 1990 and 2016.

They believe a cluster of tremors around the area could indicate a “big one” is due to hit.

Earthquakes have already struck in Japan, Tawain, Guam and Indonesia in the past few weeks.

Thorne Lay, professor of Earth and planetary sciences at UC Santa Cruz, said: "Based on the clustering of earthquakes in space and time, the area that has just slipped is actually more likely to have another failure."
He added that "the surrounding areas have been pushed towards failure in many cases, giving rise to aftershocks and the possibility of an adjacent large rupture sooner rather than later."

The Express notes that the study comes after the Ring of Fire was hit by earthquakes in the first two weeks of February.
More than 180 people were injured and 17 killed when a 6.4 magnitude quake struck Taiwan’s coast on February 6.

A minor earthquake has struck the south-west of England and south Wales, the British Geological Survey has said.
The BGS said it was a magnitude 4.4 quake and that such an event only occurs in Britain about every two to three years.
The earthquake happened on Saturday about 2.30pm local time. The BGS tweeted:

People across the regions said they felt what they thought was an earthquake on Saturday afternoon.

There has been a minor earthquake throughout South Wales....no need for you to contact the Emergency Services unless you have something to report ie:- injuries or damage. Hope this sets you minds at rest SWP
February 17, 2018

Mark Wyatt, a third-year student at Cardiff University, was entering his house in the city centre when he heard a “weird, deep rumbling sound” at about 2.30pm.
The 21-year-old said: “We heard the noises before we felt the rumble, and then the house shook for a couple of seconds before it stopped.”
Tremors were felt across the Bristol Channel into England too.
Seth Piper wrote on Twitter: “OK pretty sure I just experienced my first ever earthquake … in Bristol, UK?”

The largest and most dangerous volcano in the United States is suddenly experiencing dozens of earthquakes; most only minutes apart, and experts are suddenly getting concerned that the Yellowstone Super-Volcano may be heading toward an eruption.
The last time Yellowstone erupted was about 630,000 years ago, and when it happened, it wiped-out every living thing within 500 miles in ONE HOUR, and sent volcanic ash from the volcano in northwest Wyoming, west to southern California, south to Texas and east into Ohio.  How deep was the ash once it hit the ground?  More than 600 FEET HIGH once it fell from the sky and piled-up on the ground.  Within two weeks, the western  2/3rds of the continental United States was dead. All the trees, plants, animals, birds, fish, insects and people.  The ash killed it all.  On a map, the volcanic ash spread looked like this: 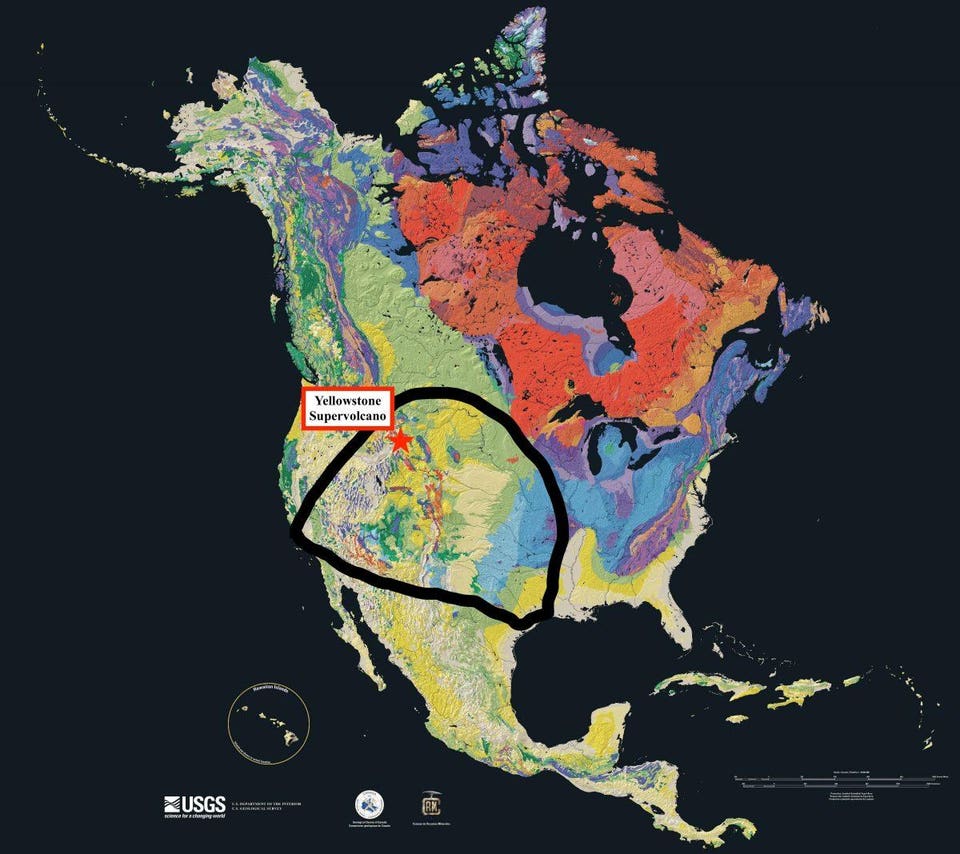 Beneath the Yellowstone National Park is an active volcano.  The "mouth" of this volcano - known as a caldera -- is utterly enormous.  The mouth measures 34 miles by 45 miles.  To put this in perspective, the mouth of this volcano is almost as big as the entire U.S. state of Rhode Island!

There is ongoing debate as to the initial source of Yellowstone's supervolcano, especially since its appearance was geologically rapid and young in age. It appears to be a hotspot, similar to the Hawaiian Islands, but on continental crust as opposed to oceanic crust. The hotspot may be due to local lithospheric interactions with an upper mantle convection or a result of a deep mantle plume that has been upwelling for millions of years.

Geologists have deduced three separate eruption events dating back 2.1 million years ago, 1.3 million years ago, and 630,000 years ago. These are all measured as tuff (volcanic ash) beds found around the west and the central United States.
As you may have deduced, the past 3 eruptions occurred every about 600,000 to 800,000 years. Given we're 630,000 years since the most recent eruption, scientists are keenly aware that an eruption could occur in the near (geologic) future. However, there is still a very small chance it will erupt in our lifetimes.
The most recent volcanic eruption 630,000 years ago produced a massive volcanic ash bed, called the Lava Creek Tuff, which covered much of western central United States. The volcanic ash is measured is rock layers around the region.
The maximum thickness the volcanic ash reaches is up to 660 feet thick. Given the ash has since compacted due to the weight of overlying sediment, the ash bed deposited would have been thick enough to cover most of our modern skyscrapers.
All life in the areas covered by this ash - died.  Everything.  Nothing survived.  Think about that for a moment: the western 2/3rds of the entire United States ---- dead.

Since Yellowstone is a volcano, there are ALWAYS little earthquakes there.  ALL THE TIME.  As magma, water, and earth move around in this huge heat-machine of a volcano, the earth routinely shakes a little here and there, in and around the volcano.  No big deal.
But because Yellowstone is the ONLY "super-volcano" located on dry land (the 13 other super volcanoes on our planet are all underwater in oceans) Yellowstone is the most-monitored volcano anywhere.
The US Geological Survey has strategically placed a whopping 29 seismographs around the volcano to monitor every snap, crackle and pop that is going on underground.
These instruments are located in "bore holes" drilled 900 feet into the ground so they get only earth movement, and not cars or trucks or thunderstorms on the surface.   They pick up the slightest details of earth or magma rumblings in or near the volcano.

Take a look at a "typical day" at Yellowstone in the seismograph image below . . . . 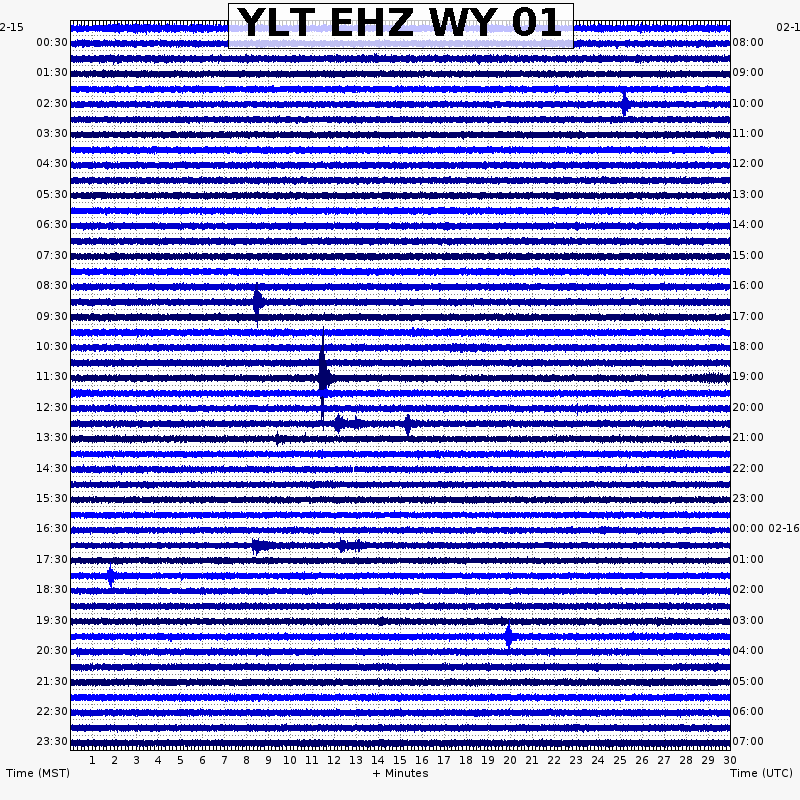 Within the last 24 hours, the seismographs have begin to show very unusual activity in almost ALL areas of the volcano.  Now take a look at the seismograph for Saturday, February 17, 2018  Something has changed . . . .

And it's not just this single bore hole.  Almost ALL 29 seismographs in and around Yellowstone are showing dramatic activity underground.

A few years back geologists also noted the elevation of the Yellowstone caldera was rising as much as 2.8 inches per year. This was a result of increased magma filling the underlying chambers and literally pushing the ground upward. Thankfully, that has significantly slowed down in the past couple years. However, this again is a sign that the Yellowstone volcano is preparing itself for a future eruption. Unfortunately, when it comes to predicting the timing of an eruption, geologists are left with a large gap in prediction.