The 200 temblors began on Feb. 8 and ramped up on Feb. 15 in an area about 8 miles (13 kilometers) northeast of West Yellowstone, Montana, according to the U.S. Geological Survey (USGS). In reality, many more tiny quakes hit the region but were simply too small for seismometers to pick them up, according to the USGS.

An earthquake swarm is usually defined as a higher-than-average number of earthquakes striking an area over a relatively short period of time, typically without a single main shock, according to the University of Utah Seismograph Stations, which measure seismic activity in Yellowstone National Park. These swarms occur when stress levels shift along smaller faults in an earthquake region, according to the USGS.
Swarms typically have two ultimate causes: shifting at major tectonic plates; or movements of water, gas or magma under the surface. As the abundance of hot springs and mud pots reveals, Yellowstone has plenty of fluid and gas just beneath the ground's surface. Yellowstone is also in a region that is being stretched and pulled apart, according to the USGS.
As a result, small quakes are the norm in Yellowstone, which is typically hit by 1,000 to 3,000 quakes a year, according to the National Park Service. The biggest quake on record there was the magnitude-7.3 Hebgen Lake quake, in 1959.


So does the new earthquake swarm mean that Yellowstone is at greater risk for "the big one?" Probably not. Scientists still don't know exactly how swarms up the odds of major quakes, but a region's seismic history can provide some clues, Poland said.
In this instance, the area, which is near Norris Geyser Basin, is usually extra "swarmy," he added.
"This particular area, especially, is a hotbed of swarm seismicity, and it has been for quite a while," Poland told Live Science. What's more, the biggest shaking recorded in this swarm topped out at magnitude 2.9, which isn't particularly strong. In contrast, the swarm last summer had quakes as strong as magnitude 4.4, according to the USGS.
The new swarm isn't quite business as usual, but it's close, he added. And it may be a response to decades-old seismic activity.
That said, a large earthquake is an underappreciated risk at Yellowstone, Poland said. Aside from the 1959 quake, a magnitude-6.1 quake struck the Yellowstone region in 1975, according to the University of Utah Seismograph Stations.
"People tend to focus on the possibility of a huge eruption, which is vanishingly small," but magnitude-7 earthquakes could happen comparatively more often, Poland said.
"When they do happen, they're going to shake the region pretty severely, so people should be prepared for that," Poland said.
If the Yellowstone supervolcano were to blow, and if the eruption resembled the big ones that occurred hundreds of thousands of years ago, the resulting far-flung ash spewing out could devastate the United States, Live Science previously reported.

While the mainstream media once again froths at the mouth over 200 earthquakes near Yellowstone National Park over the last two weeks, the total absence of reports from the msm about the 928 earthquakes in one week that had recently struck the Canary Islands, near the sleeping giant Cumbre Vieja volcano, speaks volumes. As Strange Sounds reports today, the next big earthquake is imminent in the USA with 'signs in the sky' recently appearing over both Kentucky and Colorado.

When added to the fact that the msm is reporting little to nothing upon the grand solar minimum cycle that our planet is now entering (with its expected low point by 2019 or 2020) nor the eruptions of volcanoes across the planet, as videographer and prepper Adapt 2030 reports in the first video below, the recent awakening of Mount Sinabung among other worldwide volcanoes now awakening indicates that "the grand solar minimum intensification of intense eruptions has begun".

With the state of California also on high alert after a string of tremors hit the San Andreas fault near San Francisco left millions concerned that 'the big one' was growing closer, we take a look within this story at emerging signs that we may be closing in upon a planetary catastrophe. We'll also take a look below videos at a new SQAlert  from Steve Quayle, who visits the Yellowstone National Park regularly as he lives nearby, and who tells us that Yellowstone often becomes a diversion for nameless experts to misdirect everyone's attention from the real Earth changes now happening worldwide.

"Grand Solar Minimums Not Only Bring Cold, Wet And Windy Weather On A Worldwide Basis—They Bring The Collapse Of Civilizations And The Birth Of New Ones ". From the excellent 1st video below from Adapt 2030.: 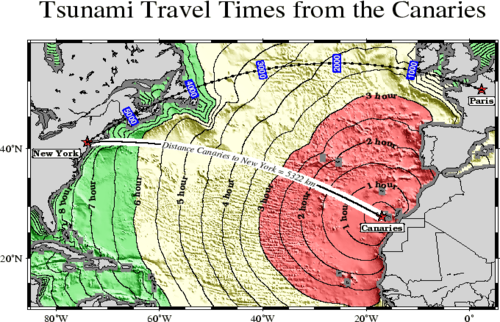 As the Daily Star reported on January 23rd of 2018, should the Cumbre Vieja volcano erupt and send a massive wall of land and lava into the sea, experts have warned a deadly wall of water, with some predictions of waves up to 100' tall or more, would quickly race across the Atlantic Ocean. Arriving at places like New York city within 6 to 7 hours and Florida within 8 hours, a tsunami triggered by a Cumbre Vieja eruption could bring death within 8 hours to more than 100 million Americans living up and down the East coast.
As we see in the graphic above, while thousands of miles away and across the entire Atlantic ocean from the Canaries, should a Cumbre Vieja eruption cause an avalanche of millions of tons of rock, soil and lava be cast into the ocean, a wave moving at speeds of up to or more than 650 mph could take aim at coastlines all across the Atlantic. Pastor Paul Begley talks with us about the recent series of earthquakes at the Cumbre Vieja volcano in the 2nd video below.
And while how high the wave might be would be dependent upon the amount of the debris sent crashing into the ocean, as videographer Adapt 2030 elaborates upon, the fact alone that our Earth has entered a solar minimum stage should be front page news everywhere, especially considering the staggering implications should his 'year without a summer' theory be correct.

While for years now, the globalists have shouted 'global warming' in their attempts to collect 'carbon taxes' and further enrich themselves, they've proven that they care little about the environment by completing ignoring the travesty that Fukushima has wreaked upon the West coast and the resultant 'mass animal deaths'  within the Pacific Ocean and all along the West coast decimating the Pacific Ocean food chain.

With volcanoes now setting the 'Ring of Fire' ablaze while erupting all across the planet at a time when the sun slides towards its solar minimum low point still about 2 years away, we see the wisdom shared in the excerpt below from Survival Dan's excellent story, whether or not the msm is reporting upon this information. Steve Quayle's recent Yellowstone alert is below videos.

Grand Solar Minimums not only bring cold, wet and windy weather on a worldwide basis; they bring the collapse of civilizations and the birth of new ones. When the cold sets in and destroys crops, causing food riots and starvation it will be too late to do anything about it. For many reasons human civilization is set up for a crisis and collapse that will devastate billions and for sure, there are many people who are well aware of where present trends are taking us. Some people do prepare but most, for psychological reasons prefer to believe everything is just fine.

Massive areas of land will become too cold for agriculture – like Russia, Ukraine, Canada – we can expect social, political, demographic disruptions like nothing experienced in all of human history. That along with a massive financial collapse and economic depression will devastate much of modern civilization.