Scores were killed in a powerful earthquake Tuesday that rocked Mexico City and surrounding states. The earthquake toppled buildings, sent rescue workers digging through rubble and knocked out power to millions.
At least 116 people died in the magnitude-7.1 earthquake, officials said. Most deaths were reported in Puebla, Morelos and Mexico states, and Mexico City, the capital.
The government said 3.8 million customers in central Mexico had their electricity service interrupted.

President Enrique Peña Nieto said 27 buildings collapsed in the capital, which is about 75 miles from the epicenter, CNN affiliate Foro TV reported.
The quake hit hours after many people took part in drills and commemorative events on the anniversary of a devastating earthquake that killed thousands in Mexico City, more than three decades ago. Residents realized Tuesday's earthquake wasn't a drill when rooms trembled.
Video showed rescue workers in hard hats and civilians in a Mexico City neighborhood combing through two-story high piles of rubble in search of survivors. Some carried away buckets full of debris.

Preliminary reports put the epicenter 2.8 miles (4.5 kilometers) east-northeast of San Juan Raboso and 34.1 miles (55 km) south-southwest of the city of Puebla, in Puebla state, according to the US Geological Survey.
The earthquake struck at a depth of about 33 miles (51 km).
"Anything below 70 kilometers is considered a shallow quake," CNN meteorologist Allison Chinchar said. "That's important, because shallow earthquakes often cause the most damage, compared to the ones that are deeper, regardless of the strength. But this also was a relatively strong earthquake."

People remove debris off a building that collapsed after an earthquake rattled Mexico City.

• Education Minister Aurelio Nuño tweeted "all public and private schools in Mexico City are canceled until further notice." He said schools in the states of Puebla and Guerrero also are closed.
• The airport in Mexico City was closed for a time but reopened by evening. There was no damage reported to its runways.
• Local and state officials gave these fatality numbers: 54 in Morelos state, 27 in Puebla state, 27 in Mexico City, and eight in Mexico state.
• The governor of Puebla said on Twitter that there were reports of damaged buildings. Tony Gali urged residents to follow civil protection security protocols.
• Peña Nieto tweeted that he has ordered the evacuation of hospitals that have suffered damage. He also ordered the transfer of patients to other medical units.
• US President Donald Trump tweeted: "God bless the people of Mexico City. We are with you and will be there for you."

God bless the people of Mexico City. We are with you and will be there for you.

Adrian Wilson, a photographer from New York City who was visiting his fiancee, was eating in the capital when the earthquake struck.
"The floor gently rocked as if a big truck went by," Wilson said. "It then amplified in waves and the whole room started shaking. The building is from the 1930s and just survived a big earthquake, so I knew I would be OK."
Wilson told CNN: "The doors were flapping open, the windows, everything."
He took a quick video to show his children, he said.
"It's almost a roller coaster ride, where you think, wow, this is kind of cool. But then all of a sudden, you're like this isn't cool at all," he said.
He looked outside and saw helicopters, and burning and collapsed buildings. "Then you realize ... this is no joy ride for anybody."
Ricardo Ramos, a TV producer from Los Angeles, was scouting a location in a Mexico City cafe when the quake hit. He ran out into the street.
"Thank you, God, for keeping us safe once again. We got to experience another terrible #earthquake, this time during a location scout," he wrote on Instagram.

A magnitude 7.1 earthquake stunned central Mexico on Tuesday, killing at least 119 people as buildings collapsed in plumes of dust. Thousands fled into the streets in panic, and many stayed to help rescue those trapped.

Dozens of buildings tumbled into mounds of rubble or were severely damaged in densely populated parts of Mexico City and nearby states. Mayor Miguel Angel Mancera said buildings fell at 44 places in the capital alone.

The quake is the deadliest in Mexico since a 1985 quake on the same date killed thousands. It came less than two weeks after another powerful quake left 90 dead in the country's south.

Mancera said at least 30 had died in Mexico City, and officials in Morelos, just to the south, said 54 had died there.

At least 26 others died in Puebla state, according to state disaster prevention chief Carlos Valdes.

Gov. Alfredo del Mazo said at least nine had died in the State of Mexico, which also borders the capital.

Mancera said 50 to 60 people were rescued alive by citizens and emergency workers.

At one site, reporters saw onlookers cheer as a woman was pulled from the rubble. Rescuers immediately called for silence so that they could listen for others who might be trapped.
Mariana Morales, a 26-year-old nutritionist, 26, was one many who spontaneously participated in rescue efforts.

She wore a paper face mask and her hands were still dusty from having joined a rescue brigade to clear rubble from a building that fell in a cloud of dust before her eyes, about 15 minutes after the quake.

Morales said she was in a taxi when the quake struck, and she out and sat on a sidewalk to try to recover from the scare. Then, just a few yards away, the three-story building collapsed.

A dust-covered Carlos Mendoza, 30, said that he and other volunteers had been able to pull two people alive from the ruins of a collapsed apartment building three hours of effort.
"We saw this and came to help," he said. "It's ugly, very ugly."

After the long-dormant supervolcano Campi Flegrei awakened late last year, a team of scientists that has pinpointed the now-active volcano's magma source says a potentially devastating eruption could be just around the corner.
Campi Flegrei is a volcanic caldera to the west of Naples that last erupted in the sixteenth century. It has been mostly quiet since then, with the exception of a few small tremors in the 1980s. Seismographic data from those rumbles allowed scientists to pinpoint the source of the magma that flooded into Campi Flegrei's chamber and caldera, according to United Press International. The results are unequivocal: An analysis of the supervolcano's hot zone suggests Campi Flegrei could be nearing an eruption.

"What this means in terms of the scale of any future eruption we cannot say, but there is no doubt that the volcano is becoming more dangerous," De Siena said.

"The big question we have to answer now is if it is a big layer of magma that is rising to the surface, or something less worrying which could find its way to the surface out at sea."

Researchers liken the volcano's hot zone to a boiling pot of soup. Over the last several years, the volcano has gotten considerably hotter.

Four years ago, scientists warned any eruption could kill millions living near or on top of the volcano.

"These areas can give rise to the only eruptions that can have global catastrophic effects comparable to major meteorite impacts," said Giuseppe De Natale, head of a project to monitor the volcano's activity.

Now, based on an assessment of the current flows, scientists are worried that a potentially deadly eruption could happen close to a population center like the city of Naples.

"During the last 30 years the behaviour of the volcano has changed, with everything becoming hotter due to fluids permeating the entire caldera," Dr De Siena explained.

"Whatever produced the activity under Pozzuoli in the 1980s has migrated somewhere else, so the danger doesn't just lie in the same spot, it could now be much nearer to Naples which is more densely populated.

"This means that the risk from the caldera is no longer just in the centre, but has migrated. Indeed, you can now characterise Campi Flegrei as being like a boiling pot of soup beneath the surface.

"What this means in terms of the scale of any future eruption we cannot say, but there is no doubt that the volcano is becoming more dangerous.

The study, which Phys.org reports provides a benchmark that could help determine the timing of future eruptions, was led by Dr. Luca De Siena at the University of Aberdeen in conjunction with the INGV Osservatorio Vesuviano, the RISSC lab of the University of Naples, and the University of Texas at Austin.
Still, scientists have some questions.

"One question that has puzzled scientists is where magma is located beneath the caldera, and our study provides the first evidence of a hot zone under the city of Pozzuoli that extends into the sea at a depth of 4 km," Dr De Siena said.

"While this is the most probable location of a small batch of magma, it could also be the heated fluid-filled top of a wider magma chamber, located even deeper."

Hurricane Maria gets even stronger as it barrels toward Puerto Rico

Conditions in the US Virgin Islands deteriorated Tuesday evening as Hurricane Maria's ripping winds began to batter the Caribbean island, hours after the storm obliterated parts of Dominica and killed at least one person in Guadeloupe
The Category 5 hurricane with sustained winds of 175 mph (281 kph) will smash into the Virgin Islands Tuesday night and Puerto Rico on Wednesday morning.

Residents of Puerto Rico, who were spared some of Irma's wrath when that hurricane's core passed north of the island, boarded up homes and businesses Tuesday. People who fled to the US territory as Maria advanced on their islands sought shelter.
Jessica Mangiaracina and Bob Perkins came to San Juan from St. Thomas with their two children. Irma destroyed everything around them and threw the island into chaos.
It took them six days to get off St. Thomas, they said, killing chickens for food and making their way through areas being looted.
Now they are coping with the reality that they've escaped into the middle of Hurricane Maria's angry path.
When asked what their current plan is, Perkins responded, "survive."
The couple is among thousands of people in shelters. 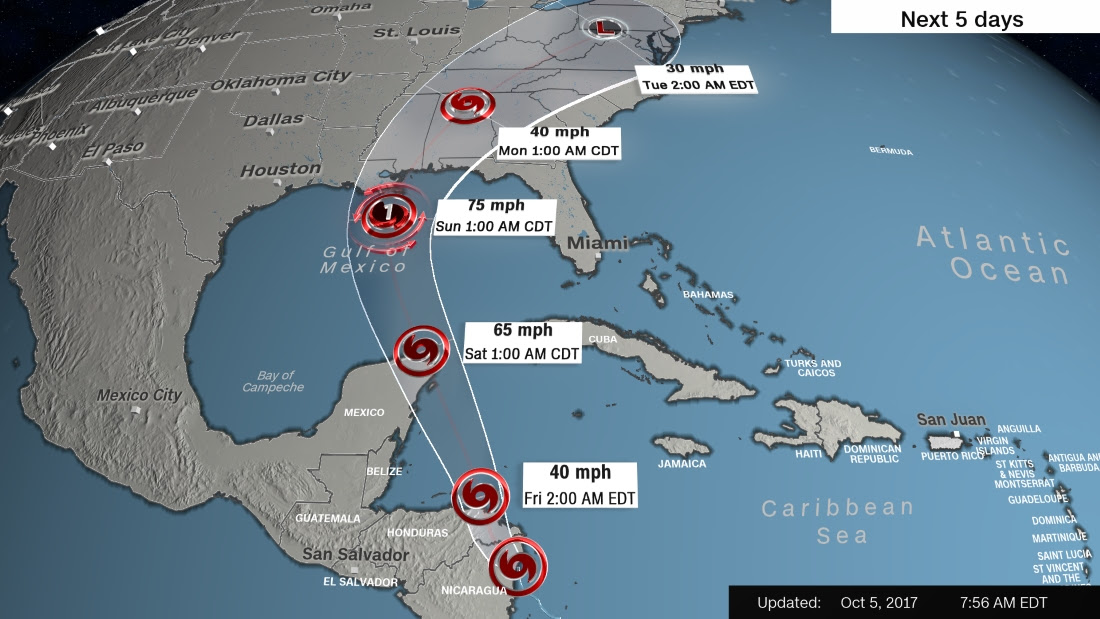 Anybody notice the "birth pangs" seem to be coming faster and are more intense? Or am I just imagining this? It feels like Hurricane Harvey was ages ago... but it was less than one month ago. Or how about Hurricane Irma? She hit just nine days ago. And the US is about to deal with Hurricane Maria.

How about that 8.1 earthquake near Mexico that hit 11 days ago and now we have a 7.1 that hit mainland Mexico today... this is just a small amount of what is going on and I am only focused on this continent. It feels like a ratcheting up of birth pangs...

“19 For the earnest expectation of the creature waiteth for the manifestation of the sons of God.
20 For the creature was made subject to vanity, not willingly, but by reason of him who hath subjected the same in hope,
21 Because the creature itself also shall be delivered from the bondage of corruption into the glorious liberty of the children of God.
22 For we know that the whole creation groaneth and travaileth in pain together until now.
23 And not only they, but ourselves also, which have the firstfruits of the Spirit, even we ourselves groan within ourselves, waiting for the adoption, to wit, the redemption of our body.”(Romans 8:19-23)
My heart and prayers go out to all those that are suffering. It will take years to rebuild and in many places it will never be the same.