Living conditions in hurricane-ravaged Puerto Rico are growing worse by the day, with tired, bewildered people lining up to buy scarce fuel and food Sunday amid a blackout and little to no telephone service.
Puerto Ricans are spending hours waiting in line to buy whatever they can, but often go home empty-handed if they do not manage a purchase before a dusk to dawn curfew takes effect.
Cell phone service is spotty at best and hotels are also running out of diesel fuel for their generators.
The general manager of a Marriott hotel in the capital San Juan told guests that if they did not find diesel by Sunday night, the entire building would be evacuated.
Hurricane Maria slammed the US island territory before dawn Wednesday as a category 4 storm on the five-point Saffir-Simpson scale, as part of a vicious and deadly tear through the Caribbean.
The storm is blamed for 33 deaths, many of them on the tiny and poor island of Dominica and 13 in Puerto Rico.
Authorities are also trying to evacuate people living downriver from a dam said to be in danger of collapsing because of flooding from the hurricane.
The 1920's era earthen dam on the Guajataca River in northwest Puerto Rico cracked on Friday, prompting the government to issue an order for mass evacuations in downstream towns.
A Puerto Rican government official said the damage had sent water gushing through and prompted fears of flash flooding.

Puerto Rico was already battling dangerous floods elsewhere on the island because of Hurricane Maria, which Governor Ricardo Rossello has called the most devastating storm to hit the island in a century.

Of the 13 victims in Puerto Rico, eight died in the northern town of Toa Baja, one of the worst-hit areas which was ravaged by winds of more than 125 miles per hour and then hit by flooding when the island's largest river, La Plata, burst its banks.

Marina Montalbo, a 36-year-old secretary from Isabela, was trying to rest in a shelter with her husband and her 11-month-old baby.
"They made us evacuate. It was a really difficult thing to have to do," she said, sobbing. "We just had to get out; they were screaming that we had to get out."
Across the island, streets were littered with debris from the storm, with toppled trees, street signs and power cables strewn everywhere.
The torrential rain also turned some roads into muddy brown rivers, impassable to all but the largest of vehicles.
Puerto Rico's electricity network has been crippled by the storm and engineers say it could take months for power to be fully restored.

The US cities of Los Angeles, San Francisco and Sacramento have all been rattled by large earthquakes 1.5 magnitude or greater in the past day.
The largest quake measured 2.6 magnitude and struck 4.30am local time at a depth of 23km near Tuolumne City, around 213km from San Francisco.
Eleven of the tremors were over 2.0 magnitude, while the rest were between 1.0 to 2.0 magnitude, according to Earthquake Track.
Although relatively small, the wave of earthquakes will entrench fears that a massive tremor measuring 7.0 or above could strike the region.
Scientists believe the US state is overdue a “big one” magnitude 7 or over earthquake by around 50 years.
Last week a magnitude 3.6 earthquake rattled northwest Los Angeles after striking in the Santa Monica mountains.
It struck in the same week a colossal 7.1 magnitude virtually flattened Mexico City, causing widespread damage and killing more than 300.
Over the weekend Mexico was shaken by more quakes, including a 6.2 tremor that caused people to flee their homes.
Since then experts have issued warnings that a powerful earthquake akin to the one that hit Mexico is “inevitable”. 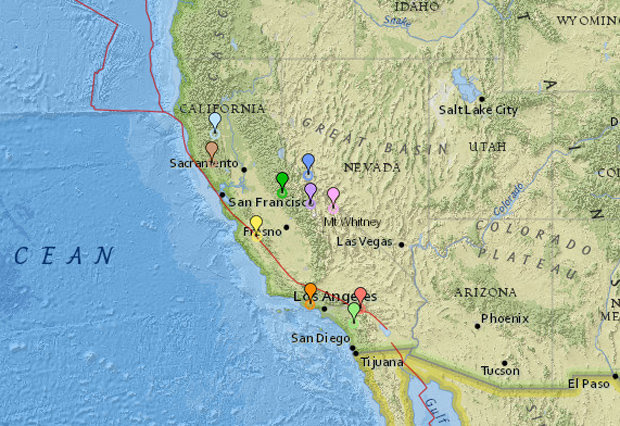 Natural disaster expert Matthew Blackett, of Coventry University, said the system causing the Mexico earthquakes is similar to the one in California.
“It's a different system,” he said. “But the system that is causing these quakes in Mexico is by and large similar to what's happening in California.”
Colliding tectonic plates are causing the earthquakes on both continents, which sit in a tremor disaster zone known as the Ring of Fire.
An 800-mile fissure that runs almost the length of California is thought to be the cause for most concern.
Over the past 150 years, pressure has been building up along the San Andreas fault that experts believe could unleash the next “big one”.
Robert Graves, researcher for the US Geological Survey, said: “In some cases, the time separation between quakes is as short as 60 years, and in others it is around 300 years.
“This variability is one reason that makes forecasting when the next quake will occur quite difficult.”
But “it will happen sometime”, he added.

A state of emergency has been declared on the Vanuatu island of Ambae, as the volcano that towers from the island's centre continued to erupt, forcing thousands to flee their villages.
The volcano - known as Monaro - has been rumbling for weeks, but its activity increased rapidly on Saturday, when it started belching ash across much of the island, blanketing villages and crops in the north and south.

That prompted authorities to evacuate half the island's population - at least 5000 people - from the north and south of the island, sending them to the east and west.
"It's quite a serious emergency," said Manuel Amu, the chairman of the island's disaster committee. "Moving people from their communities into an area with very limited houses and very limited resources like food and water. It's really a challenging issue.
"At the moment the volcano has blown up ash and dark smoke, with a little bit of lava," he said in an interview.
New Zealand scientists were monitoring the volcanic activity with an Air Force Orion due to fly over Vanuatu today.
GNS vulcanologist Steve Sherburn told Morning Report recent photographs showed it could have a devastating impact on the island.
"There's now a cone in the lake that's completely isolated from the water. So it means the eruptions will be dry and therefore will produce a lot more ash.
"And this is where we are going to get the impact on people living downwind and [their] agriculture."

The country's Geohazards Department on Saturday raised its alert for Ambae from level three to four, which is classified as a "moderate eruption state." According to a department spokesperson, the volcano's activity had not changed on Monday, with no increase nor decrease in the intensity of the eruption.

"The major hazard at the moment is to do with ash fall and acid rain. We're using whatever resource we have, some local vessels, commercial vessels, as well as the local transport," he said. "We want to be more proactive before we have to worry about pyroclast (where rocks and other fragments are hurled by the eruption) and stuff like that."
Mr Korisa said evacuation was compulsory and police officers were being used to help convince people to move.

Forgive me, truly, truly that article from a UK site is what is referred to as "click bait" or "fake news". Of course, as with these type of "articles", there is a small semblance of truth, and they just sensationalize it from there.
This story has spread through many non-conventional internet sites, but yet the SF Chronicle...the LA Times has nothing? That is because it is untrue. Their source "earthquake track"?, is pretty minimal info at best.

"The US cities of Los Angeles, San Francisco and Sacramento have all been rattled by large earthquakes 1.5 magnitude or greater in the past day. "

WHAT? LOL! 1.5? There are hundreds, across the State every day.

"Although relatively small, the wave of earthquakes will entrench fears that a massive tremor measuring 7.0 or above could strike the region."

WHAT? again LOL! This is at the point of absurdity. There is no "wave of earthquakes" , nothing other than normal activity on a daily basis. There was a "swarm" that occurred in the Salt Sea region a bit ago, that is concerning because of the San Andreas southern portion,but this false implication of a "wave" across the State of what 1-2.0 quakes is ridiculous.

If they really want a sensational headline, just counted about 95 earthquakes in California alone, just today! lol Is the "big one" coming, no question about it, and every California has been warned for decades to prepare. Will it be soon? Many main faults in California, especially So. Calif have been locked,jammed, just ready to slip, for a LONG time. There are slip faults, and thrust faults that will make extreme damage. They have exceeded the guesstimated time the Scientist have dated (which they are not really sure of), so yes, they are going to go.Worst nightmare, is that they all trigger one another like ripples going through the land.
True source, second by second, is California Technical Institute. They are about as precise as you can get. This is the link for their continual, second by second, mother-load list of earthquakes. They also pick up some in Oregon, BC & Nevada.

Here is their Home page...

Yea we've discussedhim before around here. I cant recall exactly what it was but i havent been to his site in a while now

Heather - "dutchsinse" is well know to be fake beyond fake! sigh...he is the KING of false information! Yes, we have discussed him here, as he has been "predicting" fake stuff for YEARS! Some of his gems:
-All the children killed at Sandy Hook, was faked or "pre-planned" according to him (tell that to the grieving parents!)
-There was a "death star" hidden behind the moon causing earthquakes
-The moon was out of alignment
-The government, specifically USGS was "hiding" earthquake info - (TOTALLY FAKE)
-Volcanoes about to errupt in the Southern California desert 2011 - ooopss didnt happen and TOTALLY fake story of his.

Heather, run from this guy. He is a fake, a sensationalist, and by no means a Christian. He hooks people in by promoting fear, while he makes money with every click on his site. How'd that "death star" hiding behind the moon work out? Oh thats right, when he ran outta time on that one, the excuse was that the government blew it up without any of us knowing about it. Right...smh we were all supposed to be dead four years ago according to that fake story at the time. How'd that "volcanoes erupting in the California desert" work out. Problem with that one was,just as I know the desert area he was talking about, many others did too, and actually drove out there only to discover he assertions were fake. There are just an example of his fake sensational stuff. When he was caught in lies, and confronted by the public (about to get kicked off of YT), suddenly he comes up with yet another sensational story of his friend being killed, and in full promotional paranoia, claims he was next as an excuse to disappear for awhile. But, amazingly, wow, he's back? when in truth, he never went away.

I remember that now re dutch lol. But i have to say there are some very very strange things around sandy hook. I have no idea what happened but some things around that story have never been explained