In November, 2015, Israeli officials believed that the Lebanese terrorist group Hezbollah has amassed around 150,000 rockets, including a number of long range Iranian-made missiles capable of striking Israeli cities from north to south. The estimates represent a 50 percent increase in the group’s weapons stockpiles since May, 2017 when a senior Israeli intelligence official put the number at 100,000.
Since the 2006 war, Hezbollah has built up its store of advanced weaponry with help from the Syrian regime and its Iranian sponsors. In 2016, the group commanded an estimated 20,000 active troops and 25,000 reservists, making it comparable to a medium-sized army.

Hezbollah, Iran and Syria are parts of the same opponent
Syria accused Israel on Thursday of bombing a military site that has been linked to the production of chemical weapons,Missiles versus anti-missiles and air force
Israel has the Iron Dome, Arrow and David Sling anti-missile batteries deployed throughout the country. Israel should be completely defended against aerial threats.
Designed to intercept medium- to-long-range rockets, as well as cruise missiles fired at ranges between 40 to 300km, David’s Sling complements the Iron Dome system, designed to shoot down short-range rockets, and the Arrow system, which intercepts ballistic missiles outside the Earth’s atmosphere.
Iron Dome has proven itself since it went into service in April 2011, with a successful interception rate of 85% of projectiles fired toward Israeli civilian centers since its first deployment.
With one David’s Sling interceptor missile costing $1 million, $100,000 for one Iron Dome interceptor missile and $3 million for one Arrow interceptor missile, the economic cost of destroying the hundreds of thousands of rockets aimed at Israel is astronomical.

Hurricane Maria is forecast to rapidly strengthen over the next two days as it takes aim at Caribbean islands devastated by Hurricane Irma just days ago.
The storm is expected to be a major hurricane when it hits the Leeward Islands over the next few days, intensifying to a Category 4 hurricane in 48 hours, according to the National Hurricane Center's latest update.
As of Sunday at 11 p.m. ET, Maria was about 100 miles (165 kilometers) northeast of Barbados and about 210 miles (340 kilometers) east-southeast of Dominica, the center said. It had strengthened into a Category 1 hurricane with winds of 85 mph, and is forecast to continue moving toward the eastern Caribbean at 13 mph.

"Maria continues to strengthen and is expected to be at major hurricane intensity when it affects portions of the Leeward Islands over the next few days, bringing dangerous wind, storm surge and rainfall hazards," the hurricane center said. 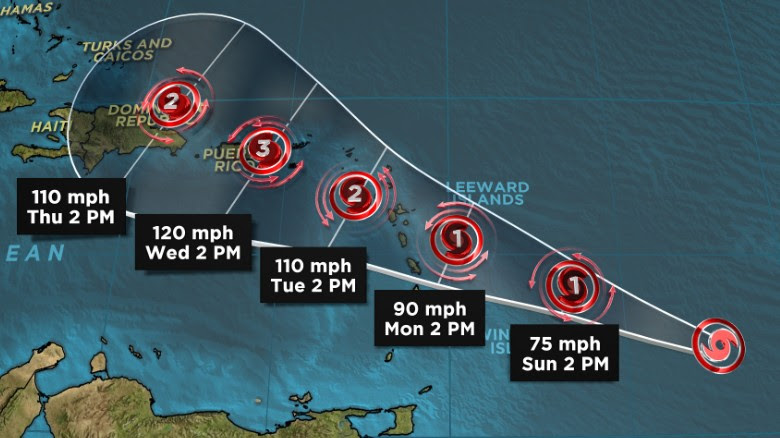 Meanwhile, Hurricane Jose is maintaining its intensity as it churns north, threatening "dangerous surf and rip currents" along the US East Coast in the next few days, the hurricane center said.
Late Sunday, the Category 1 hurricane was about 305 miles (490 kilometers) southeast of Cape Hatteras, North Carolina, and moving north at 9 mph.

While the center of Jose is expected to stay off from the US East Coast, "swells generated by Jose are affecting Bermuda, the Bahamas, and much of the US east coast," the NHC said.
"These swells are likely to cause dangerous surf and rip current conditions for the next several days in these areas."
The hurricane center said that Jose would produce heavy rain as it passes near southern New England and the mid-Atlantic on Tuesday and Wednesday, but that based on current forecasting the risk of flooding would be "limited in scope."

The convergence of signs, the Rosh Hashanna rapture potential on this particular feast day that many credible watchers expect, the "numbers" significance factor that occur this year (120 years, 100, 70, 50, 40 and 5,777) and certainly the building Ezekiel 39 nation coalition gathering on the Israeli border near the Golan heights has me hyper vigilant in "watch-mode" this week. Certainly if not this week I can't imagine the Lord tarrying another year. There is just too much at the tipping point in my humble opinion. We are so close. If for discussion sake it is this week. How does that change what you say, do, think?

I see your point. Ive become a little more vigilant during Feast of Trumpets week :). Otoh trying to temper enthusiasm but its hard. It does make a lot of sense. Ive stumbled on a couple of excellent articles on the topic and im debating whether to post them or not

Hey Scott,
The cost of Iron Dome/Patriot missiles, as well as David Sling and Arrow missile is off by quite a bit. I served in the US Embassy in Israel and know first hand that a Patriot missile (Iron Dome) is $40,000, ~100,000 Davis Sling and Arrow Missiles. Still pricey but nothing near what the article quotes.

Hey thanks for that - i love to get the "real" information on these issues -please feel free to post whenever something like this comes up!