As Hurricanes Slam The South, Western U.S. Is On Fire

As Hurricanes Slam the South, the Western US Is Literally on Fire

Amid the aftermath of Hurricane Harvey and the impending destruction of Hurricane Irma, many Americans may not be aware that the western region of the country is suffering the opposite wrath of mother nature. From southern California to Washington, wildfires are engulfing thousands of acres of land and prompting thousands of evacuations. Many of the states battling the wildfires have been doing so all summer.

On Saturday, Washington Governor Jay Inslee declared a state of emergency across the state due to the risk of wildfires, and the National Weather Service warned that 26 of the state’s 39 counties were at very high or extreme risk. According to the Washington Department of Ecology, “[a]lmost all of WA [was] awash in wildfire smoke” on Sunday. The department noted air quality in many areas had suffered as a result. According to NASA satellite imagery, smoke is also being pushed eastward across the U.S.

Just one fire in Washington, east of the Cascades at Jolly Mountain in Kittitas County, was burning 15,000 acres as of Saturday. The Seattle Times reported that “[r]oads in that area have been closed and about 3,800 homes have received Level 2 and Level 3 evacuation orders. Level 3 is the most urgent notice.” The Eagle Creek fire, burning on both sides of the Columbia River Gorge in Washington and Oregon, has torched 10,000 acres while the Norse Peak Fire in Pierce County has burned 19,000 and prompted evacuation orders. It has been burning since the middle of last month.

As seen from Washington, the Eagle Creek Fire this morning as it burned all around Multnomah Falls #LiveOnK2 pic.twitter.com/pr2fD51kri
— Evan Bell (@evanbellKATU) September 5, 2017

According to a map posted by the Northwest Interagency Coordination Center, wildfires are hitting various regions in both Washington and Oregon (they were also plaguing the region last month). Newsweek reported Tuesday that on Saturday, over 150 hikers were stranded in Oregon after a man-made fire possibly caused by fireworks gained steam.

'The gorge will never be the same': Oregonians grieve as Eagle Creek fire burns https://t.co/fOT5FHuEwa pic.twitter.com/gVo1hu5lHZ
— The Oregonian (@Oregonian) September 5, 2017

Though the hikers are safe, “the fire grew to 3,000 acres overnight that first night. As of the morning of September 5th, the fire had grown significantly and had spotted across the Columbia River into Washington near Archer Mountain,” according to a government-issued incident report. Nearby residents have been served a Level 3 evacuation order, meaning rather than simply being ready to evacuate, they should evacuate right away.
The fire is now reportedly covering 4,800 acres, and nearly 300 personnel are working to contain it. It is being exacerbated by strong winds and high heat.

Late Sunday evening, the Oregon Weather Service warned that “[c]onditions will get worse before getting better. Expect rapid westward movement of the fire as strong east winds continue through the night.” Air quality has worsened and some schools in Multnomah County, Cowlitz County, and Lower Columbia, Columbia Gorge were shut down as of Tuesday, Newsweek reported, with others closing early.

Meanwhile, in California, over 10,000 firefighters have been working to contain 23 large wildfires across the state, the Sacramento Bee reported Tuesday. “Helena Fire in Trinity County is among the most troublesome, with 72 homes destroyed and more than 11,000 acres consumed about 5 miles northwest of Junction City,” the outlet reported.
Though the fire started last Wednesday, Cal Fire reported Tuesday morning that it was only 14% contained, with close to 1,500 firefighters working to put it out. Officials said it is burning in remote, steep terrain, and nearby residents have been issued evacuation orders.
A smaller fire in Butte County has burned over 4,000 acres and burned 32 homes but is currently 76% contained. Evacuation orders in that area have been lifted.
Lower-intensity fires have also plagued Yosemite and entered a grove of 2,700-year-old Sequoia trees. Thankfully, no trees have been killed so far due to their resilient bark and the less aggressive quality of the blaze.

Fires also raged in Los Angeles over the weekend, burning 7,000 acres in what was called the largest wildfire in the county’s history. Flames burned four homes and prompted the evacuations of 700 residents, along with a declaration of a state of emergency from Governor Jerry Brown on Sunday. That fire is now almost entirely contained.

Due to fires across the state, air quality alerts were issued for Mariposa, Tuolumne, Mariposa, Merced,  Madera, Fresno, Kings, Tulare, and Kern counties in California. Fires have been burning in the state all summer. The government’s Incident Information System lists 30 active fires of various sizes throughout the state.

In Idaho, multiple active fires are plaguing over 200,000 acres of land, with two fires alone scorching over 65,000 acres each so far. Fires in Idaho have been burning since July.

Fires are also burning in British Columbia, Utah, and Colorado, though they are on a smaller scale.
Well-placed fears about storms on the Gulf coast are dominating national headlines, but the scourge of wildfires throughout the west is also straining resources, threatening wildlife, prompting vast evacuations, and endangering air quality for millions of people.
7am 9/5: Smoke will continue to blanket much of ID and the NW. Look at how far east though wildfire smoke extends – to the east coast! #idwx pic.twitter.com/JbbOFrUzt3

America Is Burning And Flooding

With large parts of California now being reduced to ashes, the world's largest firefighting aircraft has been grounded by the US Forest Service in California. In the SQnote he left while linking to that story, Steve Quayle says "Outrageous! It's almost as if someone wants Montana wilderness burned up? Wait of course they do" while urging his readers to call Montana senators and congressman and protest vigorously.

In this new story over at Strange Sounds that Steve Quayle linked to on his website Monday morning we see some amazing photographs of what is now being called the biggest wildfire in Los Angeles history. Fueled by hot conditions and shifting winds, millions of acres of land have been consumed in California and as the Strange Sounds story reports, the apocalyptic fires as seen in the photo above looked almost like a gigantic volcanic ash cloud as huge sections of the West coast burned. 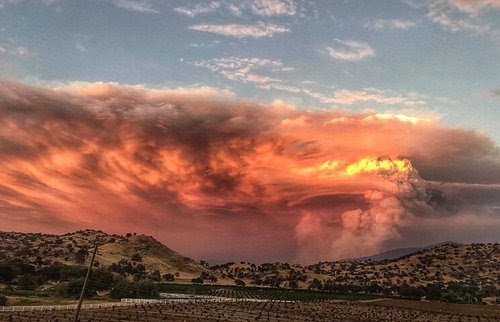 With the US Virgin Islands and the East Coast of the US now preparing for the arrival of hurricane Irma soon after Harvey delivered massive destruction and historical flooding, it has not been lost upon ANP readers that what we're now witnessing is 'Biblical' destruction and as we see outlined in this story, between 'wars and rumors of wars' and 'signs in the Heavens', we may be rapidly ticking our way towards a 'final scenario'

The time has come to seek God. Be relentless in letting people know this. These last times are our last chance with him. This is his way of making people seek him. A lot of people are hardheaded and this is what it takes. Turn away from what you are doing wrong in your life. Get a bible, the most important book,and get right with God. This world is not getting any better and He wants you with Him.