After North Korea’s latest nuclear test, scientists are worried that more underground explosions in the isolated country’s rocky north could set the stage for a deadly volcanic eruption not unlike the one that NASA fears could be brewing in the Yellowstone caldera.
Following the North’s sixth nuclear test Chinese authorities have stepped up radiation monitoring and even closed part of their border with North Korea as fallout fears have intensified.
And now, as Newsweek reports, China has limited access to a nature reserve on its border with North Korea after a mysterious series of seismic shakes at the rogue nation's nuclear test site were detected less than 10 minutes after it conducted its latest test, which also triggered a sizable tremor. The severity of the tremors prompted Beijing to close the site over fears that underground detonations by the North Koreans at a facility near Punggye-ri could lead to rockslides, or worse, trigger an eruption of the active "super volcano" Mount Paektu, according to Disclose.tv.
According to Disclose.tv, the magma and sulfur booms during a supervolcano eruption could kill millions of people in the surrounding area, and potentially endangering all of humanity.
The volcano, which is sacred to North Korea, is located right on its border with China. China’s closure is in effect for a 70-mile-radius around the detonation site. A blast from a super volcano could be catastrophic, with ash traveling thousands of miles, potentially causing hundreds of thousands of deaths

"For the safety and convenience of travelers, we have temporarily closed the southern tourist zone of Changbai Mountain," read the message from Chinese authorities, translated by UPI. "Officials are thoroughly investigating the safety of the tourist area." The area will remain closed to the public until "the potential risks disappear," it said.

But besides radioactive risks, scientists are worried that North Korea’s nuclear tests could disturb could disturb mountains in the Changbai range, along with the still-active Mt. Paektu, triggering th
A new article in scientific journal Nature’s Scientific Reports states that “an underground nuclear explosion test near an active volcano constitutes a direct threat."
Scientists wrote that it could “disturb the magma chamber of a volcano, thus accelerating the volcanic activity,” scientists argue.

“This is an interesting mystery at this point,” Göran Ekström, a seismologist at Columbia University in New York City, told Nature.

The US Geological Survey estimated the second burst of seismic energy, only eight and a half minutes after the detonation, had a magnitude of 4.1; the detonation itself registered at 6.3. While satellite images do show signs of structural collapse, the movement of rock more closely resembles a landslide.
North Korea is hardly alone in facing a potentially deadly eruption. Recently, NASA scientists have spoken out about the threat of super volcanoes and the risky methods that could be used to prevent a devastating eruption.

Advance forecasts have raised the possibility that Hurricane Jose could threaten New York City in the coming week.
The Category One hurricane's probable path revealed New York City may be in its path, leading to 80mph plus winds and storm surges battering the Eastern Seaboard.
According to the Washington Post,  based off a European mode, there is a possibility of the extremely rare Fujiwara Effect where Hurricane Jose and Tropical Storm Maria could appear to 'dance.'
According to projections for the 24th and 25th of September the storms could pinwheel around each other and slam into New Jersey which was hit by Sandy in 2012.
Th e Fujiwara Dance or Effect is more commonly seen in the warmer Pacific, where cyclones bounces off each other like a pinball in a machine.
The animated gif below shows how forecasters believe this scenario could play out, with Hurricane Jose hovering in the Atlantic after coming into contact with the East Coast.
Tropical Storm Maria is seen arriving from the south and plowing into Jose, with the warmer weather of the Caribbean storm displacing causing the slingshot.
The cyclone stays inside the cone to projected trajectory 60-70 percent of the time. At this point the maximum sustained winds are at 80 mph. It is projected to remain a hurricane at least through Monday night.
By Tuesday as it approaches New York, winds are expected to be between 39-73 mph according to the National Hurricane Center.
An Air Force hurricane hunter plane investigated the storm earlier on Saturday.
If Jose does track towards the Atlantic seaboard, it could add on to an already devastating hurricane season, following Harvey's flooding in Texas and Irma's destruction in Florida.
There’s an 18 per cent chance of tropical storm-force winds hitting New York City between Tuesday and Wednesday, Jeff Masters, co-founder of Weather Underground, told Bloomberg. 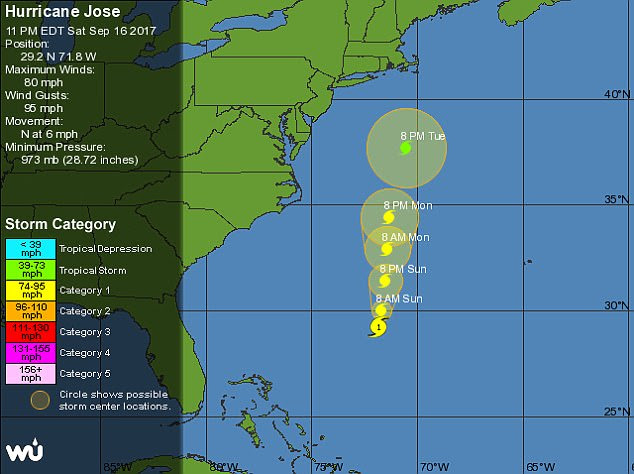 As Hurricane Jose ambles northward in the Atlantic far off the East Coast, an innocuous-sounding system has turned into Tropical Storm Maria in the Caribbean and could well follow Irma's destructive path toward Florida as a full-blown hurricane.
At 5 p.m. Saturday, the National Hurricane Center upgraded the one-time disturbance to Tropical Depression Maria and said it was 620 miles east-southeast of the Lesser Antilles, moving west at 20 mph. It was packing maximum sustained winds of 50 mph.
A hurricane watch was issued for Antigua, Barbuda, St. Kitts, Nevis and Montserrat, a route followed by Irma as it moved westward.
A Tropical Storm watch was in effect for St. Lucia, Martinique, Guadeloupe, Dominica, Barbados, St. Vincent and the Grenadines.
"Hurricane conditions are possible within the hurricane watch area by Monday night or Tuesday, with tropical storm conditions possible on Monday," the National Hurricane Center said.
Although forecast tracks can change dramatically over the coming week, maps on Saturday show the storm moving on an Irma-like path over Puerto Rico on Wednesday and Hispaniola Thursday morning heading straight toward the Florida Keys.
Hurricane Jose, meanwhile, was 485 miles south-southeast of Cape Hatteras, N.C., moving north at 6 mph with maximum sustained winds of 80 mph.