Russia Stimulates International Conflict In 'Biggest War Drills Since Cold War', 'We Don't Have The Systems In Place' To Vet Refugees

More than 95,000 troops belonging to Russia and its regional allies have started the annual Center exercises that span from the Volga to Siberia.
“Center-2015 is the final step in the armed forces’ military preparations during 2015,” said a statement from the ministry of defense, which said that it conducted nearly 80 military drills in August alone, as well as an unannounced inspection of the troops involved in the exercises last week.

The war games will engage more than 7,000 pieces of armor, up to 170 planes and 20 warships. 20 different training ranges will be used as troops belonging to all security branches, including border guards, FSB and drug police, will make maneuvers ranging up to 6,000 km. The exercises are scheduled to finish on September 20.

“What we are seeing now has not been seen since the Cold War – late 1970s and early 1980s. The army isn’t just testing out new vehicles, equipment and techniques, but is using ever greater resources for doing so,” military historian Vyacheslav Filatov told Russia’s army-sponsored Zvezda channel.
Kazakhstan will provide troops while other members of the Collective Security Treaty Organization (CSTO), which also include Belarus, Armenia, Tajikistan and Kyrgyzstan, is sending officers to observe and take charge of segments of the drill.

The scenario for the war games sees the allied army attempting to localize an international threat coming from central Asia. Most troops will be purposefully operating in unfamiliar terrain, and there will be simulations of the need to treat of huge numbers of casualties, with “wounded” troops being delivered to mobile hospitals.

“While these maneuvers are defensive in their nature, NATO will be looking on with concern,” military expert Sergey Fedorov told Zvezda. “They are astonished by the scale of the war games – it is something they have rarely seen, and would never practice themselves, restricting themselves only to limited situational drills.”
Also starting Monday, about 1,000 troops from Latvia, with the same number being supplied by NATO allies, including US, UK and Germany, begun conventional training exercises in the country. A day earlier the alliance finished Swift Response 15, the biggest military exercises in Europe since the collapse of the Berlin Wall, involving about 5,000 soldiers.
Earlier in the month, the US deployed two MQ-1 Predator long-range unmanned surveillance drones and 70 airmen to Latvia on a training mission.

Homeland Security Chairman: “We Don’t Have The Systems In Place To Properly Vet” Refugees

The chairman of the House Homeland Security Committee has urged that facilities are not in place to properly vet Refugees coming to the US from Syria and Iraq, and that it is a “reckless and dangerous policy” to accept at least 10,000 of them, as proposed by the Obama administration.

Appearing on ABC News Sunday, Chairman Mike McCaul called the situation “a humanitarian crisis of epic proportions, blaming “a failed foreign policy in Syria with the inability to remove Assad from power and also the rise of ISIS.”

McCaul admitted he is worried about an influx of refugees, saying “If I could be assured these people could be vetted properly I would be supportive.”
“The problem is the FBI testified before my committee, I’ve had Homeland Security officials and the intelligence community who all say to me that we don’t have the systems in place on the ground in Syria to properly vet these individuals.” McCaul stated.

“We don’t know who they are. I visited one of these camps in Jordan. The minister of security told me he doesn’t know who these people are,” the chairman added.

“But when you have the DNI, Mr. Clapper, express concerns and the FBI and Homeland privately as well saying that we don’t have the intelligence on the ground to vet these persons properly — that to me, my first and foremost job is to protect the American people.” he urged.
“We are a compassionate nation. We have to deal with this crisis. But, you know, this is — could be a very reckless and dangerous policy.” McCaul noted.

However, as alluded to by McCaul, senior FBI officials have recently said in Congressional testimony that the resources are simply not there to effectively vet every refugee coming into the country.
ISIS extremists claimed earlier this year that they would attempt to export 500,000 terrorists under the guise of being refugees.

“Until we address the root cause of the problem there, we are going to continue to have a refugee crisis globally….From a national security standpoint, I take ISIS at its word when they said in their own words that we’ll use and exploit the refugee crisis to infiltrate the west. That concerns me.” McCaul concluded.

As if the drought was not disheartening enough, wildfires are now raging across many parts of northen and southern California focing Governor Jerry Brown to call a state of emergency. Nowhere is the crisis more evident than in NorCal's Lake County where, as The LA Times reports, the untamed wildfire forced chaotic evacuations, is consuming hundreds of homes and businesses, and has outrun the efforts of a growing army of firefighters to corral it. However, as the following clip shows, one car-driver ran the gauntlet and managed to outrun "the worst tragedy Lake County has ever seen," in a scene right out of a disaster movie. 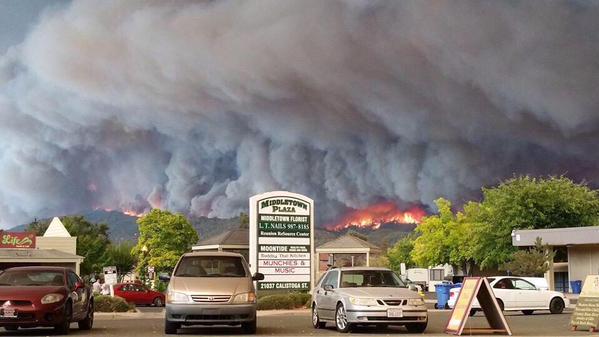 A swiftly spreading wildfire destroyed hundreds of homes and forced thousands of residents to flee as it roared unchecked through the northern California village of Middletown and nearby communities, fire officials said on Sunday.

The so-called Valley Fire, now ranked as the most destructive among scores of blazes that have ravaged the drought-stricken Western United States this summer, came amid what California fire officials described as "unheard of fire behavior" this season.

A separate fire raging since Wednesday in the western Sierras has leveled more than 130 buildings and was threatening about 6,400 other structures, with thousands of residents under evacuation orders there, too, the California Department of Forestry and Fire Protection (Cal Fire) reported.

Governor Jerry Brown declared a state of emergency in both areas, and mandatory evacuations were expanded as shifting winds sent flames and ash from the Valley Fire toward a cluster of towns in the hills north of Napa Valley wine country.