News From The Epicenter

Two car bombs exploded in southern Syria and a rocket slammed into a building in the north, killing at least 12 people in a spike in civil war violence Friday that Syrian state media blamed on rebel fighters trying to topple Syrian President Bashar Assad.
The rocket attack in the northern city of Aleppo and the suicide car bombings in Daraa, south of Damascus, occurred during a particularly bloody week nearly two years after an uprising began against Assad’s regime. On Thursday, opposition activists said pro-government militia swept through a town in central Syria, torching houses and killing more than 100 people.
Both sides have been blaming each other for the recent attacks, and it was the second time in a week that the government accused rebels of firing rockets.

Government troops and rebels have been locked in a deadly stalemate in Aleppo and other areas in the north since last summer. Six months later, the rebels hold large parts of the city. Still, they have been unable to overcome the regime’s far superior firepower.
With the two sides deadlocked on the northern front, rebels have increasingly targeted state security facilities and government institutions in other parts of the country, including in the capital, Damascus. Suicide attacks have been a hallmark of the Islamic rebel units that have been fighting alongside other opposition fighters.

Iran Says It Won't Stop Uranium Enrichment 'For A Moment'

An Iranian diplomat says Tehran will not stop uranium enrichment “for a moment,” defying demands from the UN and world powers to halt its suspect nuclear program.
The comments by Ali Asghar Soltanieh, Iran’s delegate to the International Atomic Energy Agency, come just two days after senior IAEA investigators ended two days of intensive talks with Iranian officials on allegations the Islamic Republic may have carried out tests on triggers for atomic weapons.

Jordan's Islamists, Opposition Rally Against Vote
Hundreds of Jordanian Islamists, youth activists and other opposition groups rallied Friday in Amman, calling for a boycott of next week’s parliament elections.
The demonstration came just five days before the vote, which will for the first time see a prime minister emerge from among the winning candidates rather than by appointment by the king.
King Abdullah II has said the elections crown two years of reforms he initiated to stave off massive Arab Spring-type of protests that have already toppled four long-time rulers in the region.
Friday’s peaceful demonstration drew about 1,300 Muslim Brotherhood members and others united in the boycott campaign and in demands that the king cede some of his powers and give parliament more say in the country.

The protesters say Abdullah’s reforms do not go far enough. In particular, a new election law adopted last year is a bone of contention for the Brotherhood, Jordan’s largest opposition group, and the youth activists.
They say the law continues to ensure that the majority of parliamentary seats go to Bedouin loyalists of the king at the expense of the Brotherhood, other opposition groups and Jordanians of Palestinian origin.
“We want changes made to the constitution to ensure that it’s the people who have the power,” said one of the demonstrators at Friday’s rally, Mahmoud Awad. 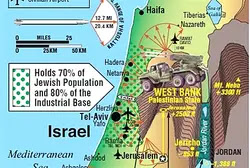 Improved Langfan postcard
Mark Langfan
Mark Langfan’s Katyusha Rocket Range All over Israel article is one ofArutz Sheva's most popular articles ever, with a over 5,400 Facebook “recommends.”

Recently, however, Rabbi Yehuda Bohrer of Beit El, who actively distributes and lectures with the cards which Langfan donates for free, concluded that the card would be more effective if it actually showed the great topographic military advantage of Judea and Samaria over the Tel Aviv-Netanya coastal plain which holds 70% of Israel’s population and 80% of its industrial base.

Following Rabbi Bohrer's suggestion, Langfan revamped the card with an actual topographic visual overlay, creating this new version. He also added a vital graphicthat explains how Israel derives over 50% of its fresh water from the westward flow of water off the Samarian Mountains, which now flows toward Tel Aviv and the coastal plain areas of Israel.

Langfan, who gave a lecture to US congressional staffers on Thursday, cites CIA open sources that state that the Samarian “highlands are main recharge area for Israel’s coastal aquifers.”

“Without the West Bank," he explains, "Israel will lose close to 60% of its water and will be destroyed before Hamas even has a chance to fire a chemical-tipped Katyusha rocket into Tel Aviv.”

In the same address, Morsi said: “Dear brothers, we must not forget to nurse our children and grandchildren on hatred towards those Zionists and Jews, and all those who support them. They must be nursed on hatred. The hatred must continue.”
The flap is a new twist in Morsi’s attempts to reconcile his background as a veteran of the Muslim Brotherhood — a vehemently anti-Israel and anti-US group — and the requirements of his role as head of state, which include keeping the strategic relationship with Washington, which wants Egypt to continue to honor its 1979 peace deal with Israel.

Earlier this month, the only Messianic congregation in the southern town of Kiryat Gat was burned down by unidentified assailants.
The Kiryat Gat congregation is under the auspices of Beit Hallel Messianic Congregation in the nearby coastal city of Ashdod. Pastor Israel Pochtar of Beit Hallel posted the following message regarding the apparent arson attack:
"A few weeks ago our congregation in Kiryat Gat was burned down. It is the only congregation in the city, has a big vision for the future, involved in helping many people. Evidently, our influence in the city has been a cause of 'concern' to some and they decided to stop our work by setting the building on fire.
"It happened one night after a service; someone threw a gasoline bomb ("Molotov cocktail") through a window and everything caught fire. Arson is a criminal act, so obviously no one owned up or taken responsibility.
"However, the landlord of the building is very connected in Kiryat Gat and has managed to check and see who could be responsible. It was obvious that it was an attack of a religious nature against us. This was the only gathering place for our Kiryat Gat congregation that now is left without a place to meet and worship. The damage is not only to the building itself, all the music equipment inside was also destroyed. The landlord is a good friend, so he is willing to cover the costs of repairs, and we would have to come up with our deductible."

As her husband's trial and possible death sentence looms, the wife of an American Christian pastor imprisoned in Iran for evangelizing clings to hope and prays for a miracle.
Naghmeh Abedini has been told by attorneys for her husband, Saeed, to expect the worst at Monday's trial, where the 32-year-old husband and father faces the capital charge of compromising national security. Supporters believe the charges are directly related to Abedini’s work nearly a decade ago starting a house church movement in Iran, and the judge he'll face, Abbas Pir-Abassi, is infamous for sending defendants to the gallows.


“Unfortunately, he has been set up for failure and a harsh sentence because of his beliefs. His attorney says that the court has gathered a large amount of evidence against him."

A “faith” organization that gets money from “Open Society” founder and left-leaning 1 percenter George Soros says it doesn’t want chaplains to participate in a prayer meeting.
The organization called Faithful America has launched an online petition discouraging the official chaplains of the U.S. House and the Senate from praying at this weekend’s Presidential Inaugural Prayer Breakfast.


According to the online Discover the Networks, Faithful America gets funding from the leftist Soros, along with organizations with sometimes-extreme perspectives such as Amnesty International, the Brennan Center for Justice, Campaign for Better Health Care, which favors a universal government program, the pro-abortion Catholics for Choice, Center for Reproductive Rights, Citizens for Responsibility and Ethics in Washington, Democracy Alliance, Earthjustice, EMILY’s List, and others.
Faithful America is described as an organization that “promotes the redistribution of wealth, an end to enhanced interrogation procedures vis a vis prisoners-of-war, the enactment of policies to combat global warming, and the creation of a government-run health care system.”

Jihadists Tell Hostages 'We Only Kill Christians And Infidels

Islamist gunmen who seized hundreds of gas plant workers in the Sahara told Algerian staff they would not harm Muslims but would kill Western hostages they called “Christians and infidels”, a local man who escaped said on Thursday.
In a rare eyewitness account of Wednesday’s dawn raid deep in the desert, a local man employed at the facility told Reuters the militants appeared to have good inside knowledge of the layout of the complex and used the language of radical Islam.
“The terrorists told us at the very start that they would not hurt Muslims but were only interested in the Christians and infidels,” Abdelkader, 53, said by telephone from his home in the nearby town of In Amenas. “We will kill them, they said.”

Muslim vigilantes are approaching Brits and demanding they behave in an Islamic way – in the middle of London.
The hooded men, who call themselves Muslim Patrol, have apparently filmed themselves loitering around English streets and intimidating people.
They have uploaded videos to their YouTube channel with the most recent three-minute clip causing a stir online.
‘The Truth About Saturday Night’, which was uploaded on Sunday, has already been viewed more than 42,000 times.
It was shot on a mobile phone at night in what is believed to be East London, with a number of men seen shouting ‘this is a Muslim area’ towards white Brits they’ve confronted.
The video description states: “From women walking the street dressed like complete naked animals with no self respect, to drunk people carrying alcohol, to drunks being killed in the middle of the road, we try our best to capture and forbid it all.”

Well, it didn't take long. A song has been put out from us to Obammy in regard to our guns.

These are lovely. Are 4 all you have? Any chance you could obtain more? Would you entertain a price break if a certain number were priced? Thank you in advance for checking on this for me.