The Palestinian Red Crescent says its medics have treated 53 Palestinians wounded in clashes tonight in Jerusalem.

At the Damascus Gate, Palestinians hurl stones at a police post.

Police respond by tossing sound grenades onto the steps leading towards the gate, sending Palestinians scrambling.

The central committee of Fatah, the movement led by Palestinian Authority President Mahmoud Abbas, warns of a broader conflict with Israel amid escalating tensions in Jerusalem, the West Bank and Gaza Strip.

In a statement, the committee calls for a “continuation of the public uprising and fight against the occupation and the settlers.”

“The continuation of the settler attacks on the holy places and the homes of Palestinian residents, their expulsion and expansion of settlements — will lead to an all-out conflict in all the Palestinian territories,” it adds.

“We will not abandon our holy places. We will be as one hand in our response to the enemy,” it says.

The Red Crescent says it has set up a field hospital to treat Palestinians wounded in clashes with police at the Damascus Gate outside Jerusalem’s Old City.

It adds that its medics have treated 17 people wounded in clashes across Jerusalem tonight, six of whom were hospitalized for what it says were mostly wounds from rubber or sponge-tipped bullets.

Worshipers at the Temple Mount for Laylat al-Qadr prayers are chanting in support of the Hamas terror group’s military wing, which this evening reiterated its threat to attack Israel over recent tensions in Jerusalem.

“Strike Tel Aviv,” they chant. “In spirit and in blood, we will redeem al-Aqsa.”

Similar chants are heard at the Damascus Gate, as Palestinians throw water bottles at riot police, who respond with stun grenades.

Palestinian demonstrators also light a trash can on fire on Salah al-Din Street near the Damascus Gate as clashes with police intensify.

The official Hamas mouthpiece says the “nightly confusion units” have begun rioting at the border fence between Gaza and Israel.

The number is substantially less than a normal year, as Israel limited the number of Palestinians who could enter due to a wave of COVID-19 transmission in the West Bank and Gaza. 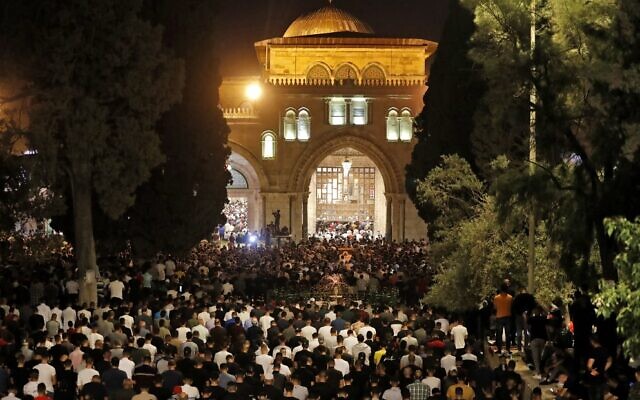 Palestinians take part in Laylat al-Qadr prayers outside the Dome of the Rock on the Temple Mount in Jerusalem’s Old City, during the Muslim holy month of Ramadan, May 8, 2021. (Ahmad Gharabli/AFP)

“We praise the steadfastness of our faithful people defending Jerusalem and al-Aqsa. We tell them: Commander Mohammad Deif made a promise, and he shall not retreat from it,” says a spokesperson for the Izz al-Din Al-Qassam Brigades.

Turkish President Recep Tayyip Erdogan lashes out at Israel after major clashes between Palestinians and police on the Temple Mount last night.

“We strongly condemn Israel’s heinous attacks against our first qibla #AlAqsaMosque, that are unfortunately being carried out every Ramadan,” tweets Erdogan, who as Turkey’s leader has embraced the Hamas terror group and frequently lashed out at Israel in relation to Jerusalem.

He adds: “As Turkey, we will continue to stand by our Palestinian brothers and sisters in all circumstances.”

Erdogan also puts out tweets in Hebrew, Turkish and Arabic

Rocket fired towards Israel amid largescale unrest in Jerusalem

Jerusalem tensions high as thousands head to Al-Aqsa after clashes