The Independent, Aug 16, 2015 (emphasis added): Japan’s weather agency issued a warning… that the likelihood of the eruption of [Sakurajima] was extremely high… after it detected a spike in seismic activity… They have warned an evacuation of the city of just over 600,000 people may be necessary. [JMA] said: “The possibility for a large-scale eruption has become extremely high for Sakurajima.”… It comes as a nuclear reactor 50 kilometres (31 miles) away was switched back on.
Mainichi, Aug 17, 2015: On Aug. 15 alone, there were 1,023 volcanic earthquakes… the JMA has pointed out that crustal changes that indicate mountain swell as a result of a magma rise are still continuing… Kazuya Kokubo [with JMA said] “underground pressure hasn’t been relieved. An eruption could occur at any time.”

Asahi Shimbun, Aug 16, 2015: … the mountain [is] expanding… [officials] estimate that a large volume of magma continues to accumulate.

Reuters/Kyodo, Aug 15, 2015: The agency also said it had raised the warning level … to an unprecedented 4.
Jiji Press, Aug 17, 2015: [Japan] remained alert for signs of a major eruption… [An official] called on the public to act calmly… a major eruption could be imminent. Level 4 is the highest ever for Sakurajima… “I have lived in Sakurajima for more than 50 years but have not imagined we would have to evacuate,” said Emiko Miyashita, 80… crustal movement was also observed[and there's] signs indicating magma has risen to near the volcanic vent… “It would be no surprise if it were to erupt at any moment,” an agency official said.

Wall St Journal, Aug 17, 2015: [Japan] remained on high alert for a major eruption at Mount Sakurajima… Seismic activity began increasing dramatically Saturday morning and data showed swelling of the mountain, the agency said.
Asahi Shimbun, Aug 15, 2015: [JMA] said a major eruption of volcanic Mount Sakurajima could be imminent… signs of sudden crustal movement were also observed… Agency officials said there were indications a much larger eruption was in the offing.
Jiji Press, Aug 12, 2015: Sendai nuclear power plant… has not designated a site for relocating nuclear fuel in the event of a massive volcanic eruption, claiming that warning signs would give Kepco enough time to prepare and transfer the fuel… In the event of a major eruption, however, pyroclastic flows could reach the plant and disable cooling functions… which could trigger massive radioactive emissions… The sheer volume [of spent fuel] makes it hard to find a relocation site big enough to take them… Toshitsugu Fujii, a member of the panel [advising the gov't] said that the panel’s opinion is not necessarily consistent with that of the NRA.

Officials at Yosemite National Park have announced they will close one of the park’s campsites after two squirrels died of plague in the area.

The 304-site Tuolumne Meadows Campground will be closed from noon Monday until noon Friday so that authorities can treat the area with a flea-killing insecticide. The substance will be sprayed into rodent burrow holes, according to the California Department of Health (CDPH).

Plague is carried by rodents and other animals, and is spread by fleas.
“Although this is a rare disease, and the current risk to humans is low, eliminating the fleas is the best way to protect the public from the disease,” CDPH director and state health officer Dr. Karen Smith said, according to a CDPH press release.

“By eliminating the fleas, we reduce the risk of human exposure and break the cycle of plague in rodents at the sites. People can protect themselves from infection by avoiding any contact with wild rodents,”she added.

Individuals with camping reservations at the site said they were contacted by the park and told their bookings had been canceled. The campsite books up months in advance, within minutes of sites becoming available, according to KTLA 5 News in Southern California.

It comes just one month after a child fell ill with the plague after camping at Yosemite’s Crane Flat Campground. The child has been recovering in hospital.

Meanwhile, Colorado also continues to battle the plague, with two people dying in the state within two months of each other. Twelve Colorado residents have contracted the flea-borne disease since 2014 – a massive surge compared to just eight people during the previous nine years.

Symptoms of plague can include fever, chills, weakness, abdominal pain, shortness of breath, and swollen lymph nodes. It can be treated and cured with antibiotics soon after infection, but can become deadly if treatment is delayed.

The most common form of plague is bubonic, during which patients typically show symptoms two to six days after becoming infected. This is the type that wiped out an estimated 60 percent of Europe’s population in the 1300s.

However, septicemic plague is trickier to diagnose, as the victim’s glands do not swell.
The third and least common form is pneumatic, which involves pneumonia and is capable of spreading among people through coughing.

Crews searched for an unknown number of civilians and soldiers Saturday who are believed trapped by multiple explosions that killed at least 112 people this week in this eastern Chinese city.
As of Sunday morning, more than 50 people have been rescued in Tianjin, city government spokesman Gong Jiansheng said. They include a 19-year-old firefighter who lay on the ground for hours with burns and a cracked skull until he was found, officials said.
Relatives of some of the 95 people missing, mainly firefighters, stormed an official news conference demanding to know the whereabouts of their loved ones. Families wrote the names of missing people on posters lining a street outside a temporary shelter near the rescue site.

On Saturday, fires sent plumes of black smoke skyward near where explosions devastated a chemical warehouse in Tianjin on Wednesday.
But officials denied news reports that an evacuation order had been immediately issued for everyone within 1.8 miles (3 kilometers), with Gong calling the reports "false information."
The Beijing News, citing the People's Armed Police Force, had reported the evacuation order. CNN has reported that at least one disaster recovery shelter is located within the reported evacuation zone.
Gao Huaiyou, the deputy director of the city's Work Safety Administration, said Friday the warehouse was a temporary storage facility. Materials were kept there briefly after they arrived at the port and before they were transported elsewhere.
The warehouse was destroyed by the explosions, he told reporters at a news conference, and managers of the facility have provided "insufficient information" about what was stored there.

Chinese officials sent chemical and biological experts to the scene, and 1,000 firefighters were still there on Friday, pouring foam and sand on lingering hotspots, according to authorities.
Wen Wurui, Tianjin's environment protection chief, said Thursday that some chemical levels in the area were higher than normal but they would not be dangerous to humans unless someone were exposed to them for long periods.

Fire officials said hazardous chemicals stored at the warehouse were ignited by fire. The cause of the fire has yet to be determined.
Executives from Rui Hai International Logistics Co., the company that owned the warehouse, have been taken into custody, state media reported Thursday.


There were no immediate reports of damage.
The earthquake struck in Piedmont, a suburb next to Oakland, at 6:49 a.m. local time.


The  originally reported it as a magnitude 4.2 temblor but quickly adjusted it to 4.0. 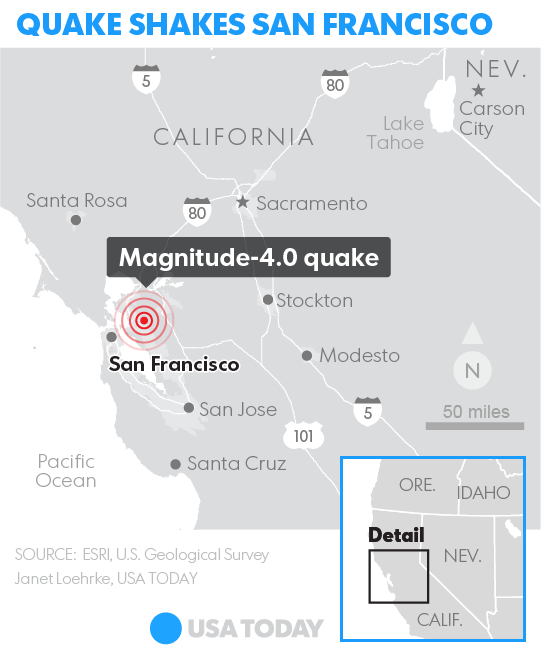