Just as we would expect:

A More Secular Europe Divided By The Cross

This article actually comes from the NYTimes and is worth printing in full below. Bolded parts are mine: 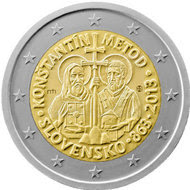 The European Commission at first ordered Slovakia to revise its monks-in-halos design for a commemorative euro coin.

Hey guys, haven't posted in a while. What do you make of a) America's future talks with the Taliban and b) the future talks in Geneva in regards to Syria? Is this a uniting of Syria that will come against Israel?

where have u been ??

I guess u have been really busy.

Have u noticed the stock market...??

The meeting with the Taliban is a sham. Its so we can declare 'victory' and leave. The Taliban will take over immediately after we leave. In fact, I was just reading an article last night addressing that (I believe it may have been The Daily Bell). Its all for show.

As far as the next uniting against Israel, I believe it will come from the radical elements surrounding Israel, as led behind the scenes by Iran/Russia (Egypt, Gaza, W Bank, Syria, Lebanon)