Russia's Clear Signal to US: Think Twice Before Using Your Nukes

Russian parliamentarian Frants Klintsevich, who recently criticized British Defense Secretary Michael Fallon's remarks about using nuclear weapons in a first strike attack in "the most extreme circumstances," has now sent a tough warning to the US in case of any similar aggression.

Russia will be able to provide a tough response to a possible nuclear strike of the US, Russian parliamentarian Frants Klintsevich, first deputy chairman of the defense committee in Russia’s upper house of parliament, the Federation Council, said on his Facebook page.

His latest remark comes in the follow up to the statement of first deputy chief of the General Staff's Main Operational Department, Lt. Gen. Viktor Poznikhir that the US missile defense system in Europe allows a covert nuclear missile strike against Russia.

"The presence of US missile defense bases in Europe, missile defense vessels in seas and oceans close to Russia creates a powerful covert strike component for conducting a sudden nuclear missile strike against the Russian Federation," Poznikhir said on Wednesday.

The results of computer simulation confirm that the US missile defense is directed against Russia and China, Poznikhir said.

"Russian representatives have often appealed to the US side, drawing their attention to the danger the global missile defense system poses to the strategic balance of forces in the world. But facts are ignored. The US claims its missile defense system is not directed against Russia and China. But… the results of computer simulations testify to the contrary," he said.

Commenting on the above remarks, senior fellow at the Center for European Studies of the Institute of World Economy and International Relations (IMEMO) of Russia's Academy of Sciences Viktor Olenchenko told Radio Sputnik that they were prompted by the alarming escalation of aggressive rhetoric of the US military and some US allies in NATO. 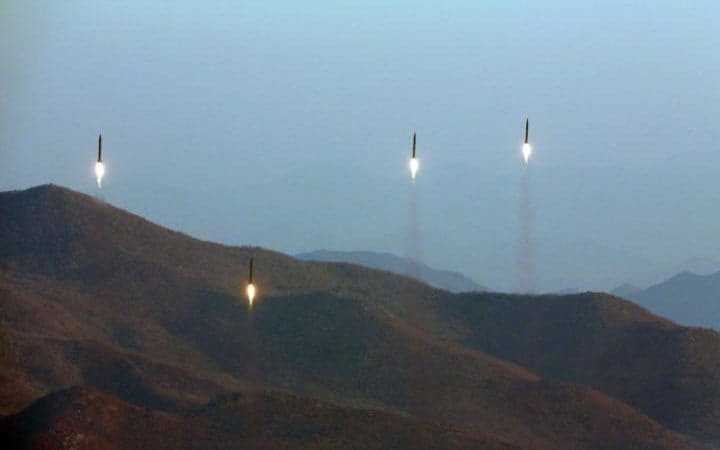 An undated file photo made available by the North Korean Central News Agency (KCNA), the state news agency of North Korea, on 07 March 2017, shows four projectiles during a ballistic rocket launching drill of Hwasong artillery units of the Strategic Force of the Korean People's Army (KPA) at an undisclosed location CREDIT:KCNA

On Friday, Rex Tillerson, the US secretary of state, warned that failure to curb North Korea's nuclear and ballistic missile programmes could lead to "catastrophic consequences".
He called for a greater enforcement of UN sanctions against North Korea and requested the help of the rest of the world in pressuring North Korea to step back from its military threats.
North Korea's deputy UN ambassador responded by stating US efforts to get rid of his country's nuclear weapons through military threats and sanctions were "a wild dream".
Mr Trump told Reuters in an interview on Thursday that a "major, major conflict" with North Korea was possible over its nuclear and ballistic missile programmes.
The top US military commander in the Pacific warned earlier this week that North Korea could strike American soil.
"I don't share your confidence that North Korea is not going to attack either South Korea, or Japan, or the United States ... once they have the capability," Admiral Harry Harris, who heads the US Pacific Command, told Congress.
He was defending the deployment of the Terminal High Altitude Area Defence (THAAD) missile defence system by the US in South Korea.
The move was “in response to North Korea’s advancing nuclear and missile threat”, a US military statement said, amid concerns that Pyongyang was planning its sixth nuclear test since 2006.

While the arms control regime is going through the hardest times ever, a superweapons arms race is on. This month, the US demonstrated its capability to deliver long-range precision strikes in Syria. It also used its most powerful non-nuclear bomb in Afghanistan. The GBU-43/B Massive Ordnance Air Blast can obliterate everything within a 1,000-yard radius. The US military started testing the new B61-12 gravity nuclear bomb in Nevada. A fleet of F-35 stealth fighter jets arrived in Europe. Today, railguns and directed-energy weapons systems are counted upon to sustain America’s precision strike advantage. But there is an area where the US appears to be lagging behind.

The emergence of hypersonic weapons is a revolution that seriously affects the global balance of power. For instance, when the new $15 billion US Ford-class aircraft carrier is commissioned, it will become vulnerable to hypersonic missiles.

On April 15, Russia successfully tested the 5-ton 3M22 Zircon hypersonic cruise missile that will travel at eight times the speed of sound at 6,136mph.

The hypersonic missile is a quantum leap in technology. It requires no electronic countermeasure warfare and complex trajectory of flight. The sheer speed makes any contemporary anti-aircraft defenses obsolete. The only air defense system that can strike targets capable of speeds of around Mach 5.0-Mach 6.0 is the Russian S-500.

The weapon is designed to be carried by advanced and modernized warships and submarines, including those of the Husky-class. Production of the missile is expected to be launched next year. The Admiral Nakhimov and the Pyotr Veliky nuclear-powered missile cruisers will be the first to receive the new weapon in 2018 and 2022 respectively. The Russian Navy plans to refit the two giant warships with ten 3S-14 vertical launch systems – each of which carries eight rounds. The addition of the 3S-14 would enable each ship to carry eighty cruise missiles onboard.

According to the «A Threat to America's Global Vigilance, Reach, and Power: High-Speed, Maneuvering Weapons», report produced in late 2016 by a blue-ribbon panel of experts for Air Force Studies Board at the National Academies of Science, the US is falling behind in the technology race to develop both defensive and offensive high-speed maneuvering arms. The paper sounds the alarm about an arms race quietly underway for several years to develop hypersonic missiles for both strategic nuclear weapons and conventional rapid strike systems.

Mark J. Lewis, chairman of the panel that produced the report, said the panel concluded that «the United States may be facing a threat from a new class of weapons that will effectively combine speed, maneuverability, and altitude in ways that could challenge this nation’s tenets of global vigilance, reach, and power».

Russia is also leading in hypersonic gliders. For instance, in October 2016 Russia successfully tested Object 4202 – an advanced glider warhead. The test was conducted at midday from a site near the town of Yasny, Orenburg region, in the southern Urals, and the warhead reached the Kura test range in Kamchatka in Russia’s Far East. The hypersonic glider vehicle (HGV) vehicle travels most of the time in the stratosphere rather than in space.

While spending ten times less that the United States on defense, including research and development, Russia has produced weapons that make entire US missile defense effort ineffective, while providing it with technological edge in first strike capability.
This is the time when fantasies come true. Russia has acquired the technology to create real models of hypersonic weapons, including cruise missiles and hypersonic warheads for ICBMs-gliders. Its world leadership in the race is confirmed by successful tests. Nobody else in the world is anywhere near to mass production phase.

American generals and political decision makers are "dizzy" with power and do not understand the true consequences of their rhetoric, according to Frants Klintsevich.
The first deputy chairman of the defence committee in the Federation Council has vowed to provide "the toughest possible response" to any US aggression and with a targeted stoke on North Korea seemingly just moments away all-out war between America and Russia could be on the cards.
Mr Klintsevich was responding to comments made by Lt Gen Viktor Poznikhir, who said: "The presence of US missile defence bases in Europe, missile defence vessels in seas and oceans close to Russia creates a powerful covert strike component for conducting a sudden nuclear missile strike against the Russian Federation.
"Russian representatives have often appealed to the US side, drawing their attention to the danger the global missile defence system poses to the strategic balance of forces in the world. But facts are ignored.

"The US claims its missile defence system is not directed against Russia and China. But the results of computer simulations testify to the contrary."
Mr Klintsevich then added: "There are no doubts that such statements are addressed to certain receivers. The first addressee is the international community. Secondly, it is a clear signal to the US leadership that any further developments will come as no surprise to us. I think such a reminder won't be excessive. Let them know that we know.
"At this particular moment the most reliable guarantee of further peace is our ability to provide the toughest possible response to any possible aggression. This is what, as I think, first deputy chief of the General Staff's Main Operational Department Lt Gen Viktor Poznikhir meant when making such a statement," Klintsevich said.

The Rise Of The Generals

Has President Donald Trump outsourced foreign policy to the generals?
So it would seem. Candidate Trump held out his hand to Vladimir Putin. He rejected further U.S. intervention in Syria other than to smash ISIS.
He spoke of getting out and staying out of the misbegotten Middle East wars into which Presidents Bush II and Obama had plunged the country.

Trump no longer calls NATO “obsolete,” but moves U.S. troops toward Russia in the Baltic and eastern Balkans. Rex Tillerson, holder of Russia’s Order of Friendship, now warns that the U.S. will not lift sanctions on Russia until she gets out of Ukraine.
If Tillerson is not bluffing, that would rule out any rapprochement in the Trump presidency. For neither Putin, nor any successor, could surrender Crimea and survive.

The War Party seems again ascendant. John McCain and Lindsey Graham are happy campers. In Afghanistan, the U.S. commander is calling for thousands more U.S. troops to assist the 8,500 still there, to stabilize an Afghan regime and army that is steadily losing ground to the Taliban.
Iran is back on the front burner. While Tillerson concedes that Tehran is in compliance with the 2015 nuclear deal, Trump says it is violating “the spirit of the agreement.”
How so? Says Tillerson, Iran is “destabilizing” the region, and threatening U.S. interests in Syria, Yemen, Iraq and Lebanon.
But Iran is an ally of Syria and was invited in to help the U.N.-recognized government put down an insurrection that contains elements of al-Qaida and ISIS. It is we, the Turks, Saudis and Gulf Arabs who have been backing the rebels seeking to overthrow the regime.

Merkel says Macron would be 'strong president' for France