Russia warns US against unilateral strike on North Korea

Russia on Monday warned Washington against launching a unilateral strike on North Korea, after US Vice President Mike Pence said the era of “strategic patience” with Pyongyang was over.

“This is a very risky path,” Russian Foreign Minister Sergei Lavrov said at a news conference in Moscow.

“We do not accept the reckless nuclear missile actions of Pyongyang that breach UN resolutions, but that does not mean that you can break international law,” he said.

“I hope that there will not be any unilateral actions like the one we saw recently in Syria.”
Pence on Monday warned North Korea not to test President Donald Trump’s resolve, declaring that “all options are on the table” for curbing its missile and nuclear weapons programmes.
Defying international pressure, the North on Sunday tried to test-fire another missile in an attempt that failed, but which fuelled fears that it may be preparing for its sixth atomic weapons test.
Pence said that the era of US “strategic patience” in dealing with the North was over, after more than two decades.
“In the past two weeks, the world witnessed the strength and resolve of our new president in actions taken in Syria and Afghanistan,” Pence said.
“North Korea would do well not to test his resolve, or the strength of the armed forces of the United States.”
Pence, visiting the heavily militarized border between the two Koreas Monday, said that while Washington wants to achieve security “through peaceable means, through negotiations. But all options are on the table as we continue to stand shoulder to shoulder with the people of South Korea.”

US Vice President Mike Pence has warned the 'era of patience' with Kim Jong-un is over as he insisted America's commitment to South Korea is 'iron-clad'.
Pence, speaking in the perilous Demilitarized Zone separating North and South Korea, reiterated that 'all options are on the table' to deal with the threat posed by Pyongyang.
After travelling to the region with his family, Pence said Donald Trump is hopeful that China will now use its 'extraordinary levers' to pressure the North to abandon its nuclear and ballistic programme.
This morning he warned Kim Jong-un not to 'test the resolve' of the US President and insisted any use of nuclear weapons by the secretive state would be met with 'an overwhelming and effective response'. The visit came shortly after a failed North Korean missile launch that some claim may have been 'thwarted by cyber attacks from the US.'
Trump has ordered a naval strike group, led by the USS Carl Vinson aircraft carrier, to the region, though the vessels remain a long way from the peninsula.
But this morning, Japanese media claimed both China and Russia had dispatched intelligence-gathering vessels from their navies to chase the 'armada' amid mounting concern over the US deployment. The claims were made by multiple sources of the Japanese government, according to The Yomiuri Shimbun.
Russia today warned Washington against launching a unilateral strike on North Korea claiming the US was on a 'risky path'. 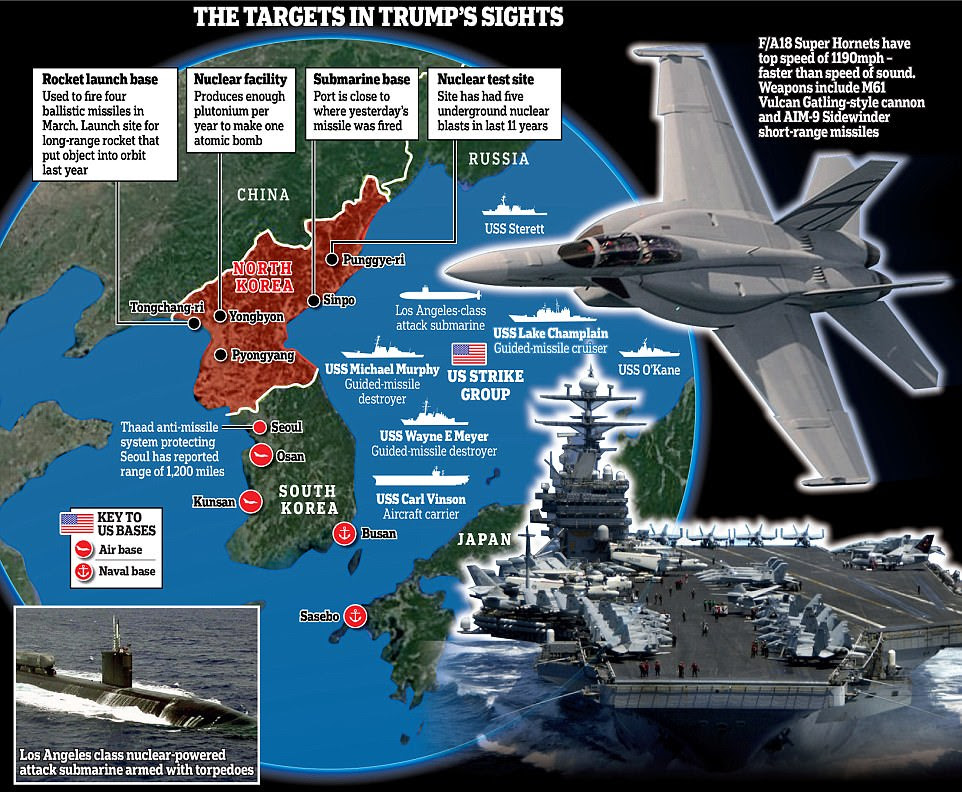 Pence says 'all options on the table' in tackling N. Korea

Trying this again Brother Scott, with the right FB link this time...lol
Franklin Graham just posted this on his FB, with the accompanying video. This Resurrection Day weekend, he spent in Iraq with Christians that had survived ISIS. Within the burnt rubble, he found a Samaritans Purse Christmas Box that had been given to a child there at one time. And who is there serving as a Doctor for Samaritans Purse Field Hospital? Dr. Kent Brantly, our Brother in Christ who survived Ebola. I tell ya, these Brothers & Sisters Serving the Lord, put us to shame. Yet all that Franklin asks of us, is that we lift our persecuted Brothers & Sisters in Iraq, and those in Samaritans Purse who serve them, up in Prayer. God Bless them and keep them from harm and evil in the Name thats above ALL Names, Jesus Christ our Lord and Savior!AMEN!

"Here is a short video of my time in Iraq over the past few days. When I was at our Samaritan's Purse Emergency Field Hospital outside of Mosul, Dr. Kent Brantly was there working, so it was good to see him again. Greta Van Susteren and her husband John Coale were also there. Take a minute to see some of the things we saw, and how ISIS is destroying so many lives in that part of the world. Christians are being persecuted and killed--and they need our prayers."