6 You will hear of wars and rumors of wars, but see to it that you are not alarmed. Such things must happen, but the end is still to come. 7 Nation will rise against nation, and kingdom against kingdom. There will be famines and earthquakes in various places. 8 All these are the beginning of birth pains.


The US Navy’s Carl Vinson aircraft carrier has finally arrived within striking distance of North Korea, after weeks of internal miscommunication and confusion about the massive ship’s whereabouts.

The USS Carl Vinson is the flagship vessel of the US Navy’s Carrier Strike Group One. As the threat of a nuclear-equipped Pyongyang looms, the strike group “sits in the Philippine Sea just east of Okinawa,” US Adm. Harry Harris told the House Armed Services Committee on Wednesday.
The Vinson, two destroyers and a guided missile cruiser are standing by “in strike range and power projection range of North Korea if called upon to do that,” Harris said.

“In the next few days I expect it will continue to move north,” he added.

Two weeks ago, Defense Secretary James Mattis said the Vinson was “on her way up there because that’s where we feel it’s prudent to have her at this time.” And on April 11, White House Press Secretary Sean Spicer insisted that “a carrier group steaming into an area like that, the forward presence that is clearly … a huge deterrent,” adding “it serves multiple capabilities.” Using air support on North Korea from jets on the Vinson, when the ship was nowhere near its stated destination, was clearly not one of those capabilities.


Chinese troops stationed along the border with North Korea have been placed on high alert, according to Japanese daily newspaper Yomiuri Shimbun.

The People's Liberation Army has three stages of alertness, and this is the middle stage. Beijing activates it when a "direct military threat" is detected. Soldiers are prepared for combat and are forbidden from taking leave.
The order came down in mid-April, and China has moved 150,000 soldiers to guard the border – or to potentially invade the Hermit Kingdom themselves, if they feel the need. Sim Tack, a North Korea expert with geopolitical analysis firm Stratfor, called the Chinese movements an attempt to minimize American involvement on the peninsula.

"The overt presence of Chinese forces would dissuade the US from going into that territory because they would run the risk of inviting that larger conflict themselves," Tack told Business Insider, adding that China could enter North Korea to place themselves "in a position to force a coup or force Kim's hand [in disarming his missiles]."

China's ultimate goal would be to "make sure North Korea still exists and serves Chinese interests while it stops acting as a massive bullseye to the US."
The Global Times, China's state-run media outlet, wrote that Beijing would consider a military response to an American surgical strike against North Korean nuclear facilities to be "unnecessary." The relationship between the once-staunch allies has soured in recent months, with Beijing threatening "serious consequences" to Pyongyang if they belligerently launch missiles.

A senior administration official said military preparations are underway in the chance that they become necessary regarding North Korea.
All 100 senators were invited to attend a rare, closed-door briefing by Secretary of State Rex Tillerson and Secretary of Defense Jim Mattis at the White House Wednesday so the administration could communicate “the seriousness of the threat posed by North Korea.” An official who briefed reporters next door while it was underway said North Korea is a “brutal, unpredictable and capable regime that possesses an increasing possibility of destruction.”
“What you’ve seen is a really integrated effort to prioritize diplomatic and informational aspects of national power, but also what you will see soon is using the economic dimension of national power, as well as the military preparations that are underway,” the official said.
The official said there is a new level of threat posed by the “unacceptable and erratic and unlawful behavior of the Kim Jong Un regime.”

Kim Jong-Un's army readied for war as they fired rockets and torpedoes at mock enemy warships during North Korea's 'largest ever' live-fire artillery drills on Tuesday.
Hundreds of tanks were lined up along the eastern coastal town of Wonsan in a show of military strength to celebrate 85 years since the North Korean army was created.
Kim saluted the military as he watched the exercises on Tuesday, which involved the firing of more than 300 large-calibre artillery pieces and included submarine torpedo-attacks.
Just one day later, South Korea conducted joint military live-fire drills with the US at Seungjin fire training field in Pocheon, South Korea, near the border with North Korea. 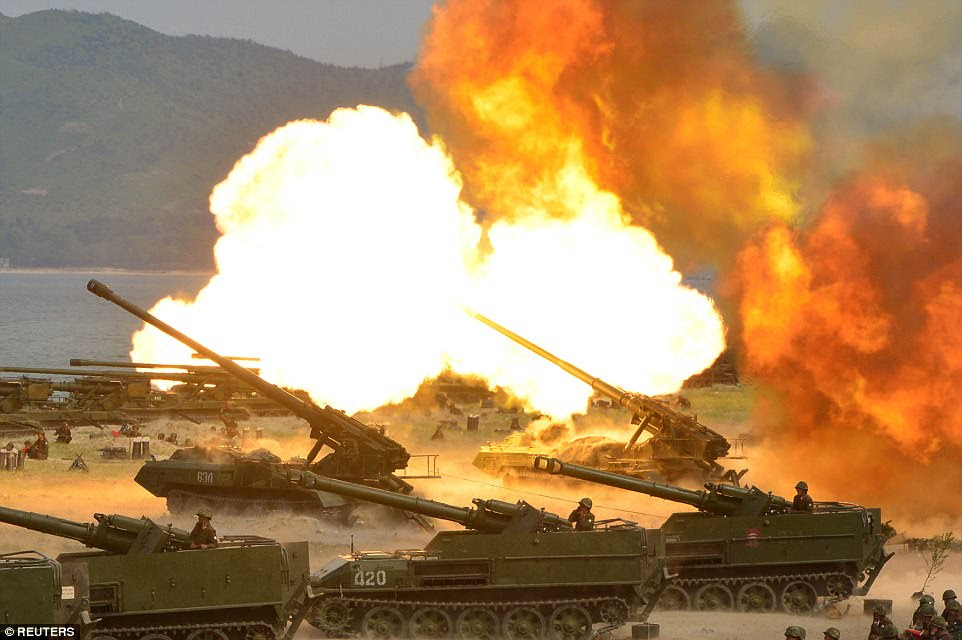 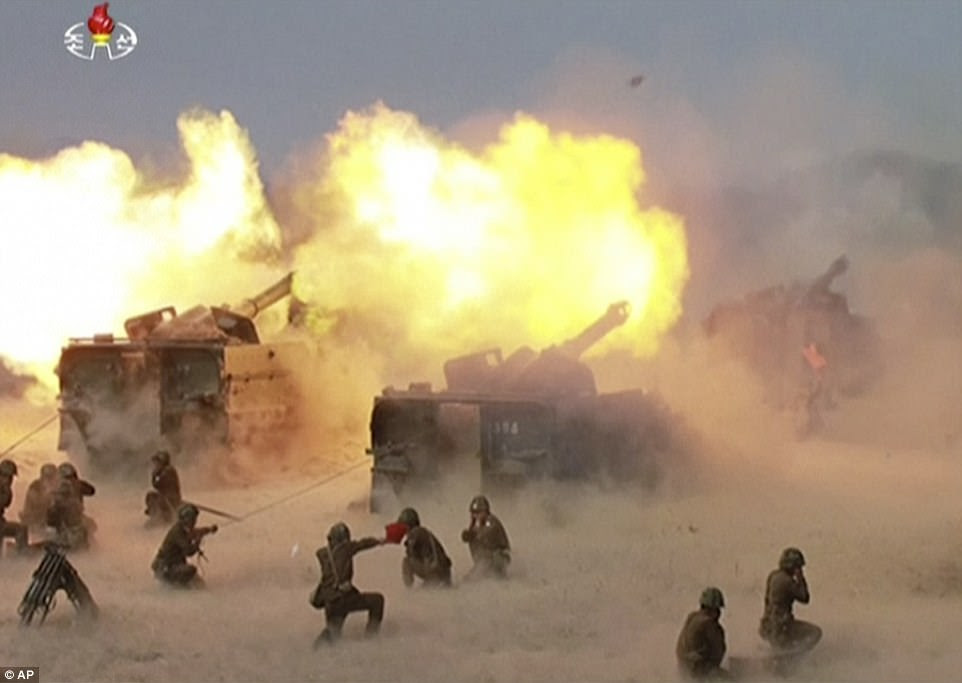 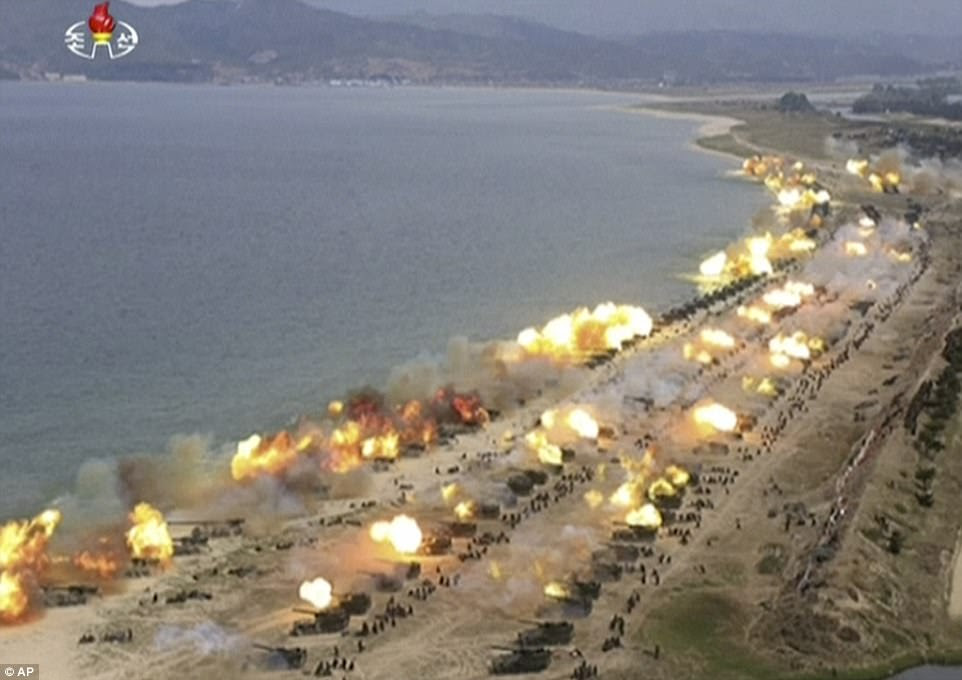 And in a defiant bit of timing, South Korea have announced that key parts of a contentious US missile defense system have been installed.
The South's trumpeting of progress in setting up the Terminal High-Altitude Area Defense system, or THAAD, comes as high-powered US military assets converge on the Korean Peninsula and as a combative North Korea signals possible nuclear and missile testing.
On the same day, a US guided-missile submarine docked in South Korea.

The US and South Korean militaries have taken part in a combined firing drill as part of joint exercises amid increased tensions with Pyongyang. It comes just one day after the North launched its own artillery drill.
More than 2,000 South Korean and American troops were involved in the Wednesday drills in Pocheon, South Korea, according to Yonhap news agency.
The war games took place at Seungjin Fire Training Field, some 30km south of the Demilitarized Zone (DMZ) dividing the two Koreas.

The exercises, which lasted 45 minutes, included some 100 artillery pieces, 90 armored vehicles and 50 aircraft, according to South Korea's Ministry of Defense.
Footage from the scene shows trails of color streaked across the sky as fighter jets showcase their force, as well as firing tanks, huge clouds of smoke, and soldiers dropping out of helicopters.

Iran news agency FARS reports that according to Syrian military sources, Moscow has informed Damascus of its preparedness to dispatch ground troops to Syria.
FARS - which like most US media should always be taken with a gran of salt - quotes the Al-Hadath news, according to whose sources Russia has announced that in case of the Syrian army's request it is ready to send ground forces to Syria. The sources said that special Russian forces are prepared to be deployed in regions which are experiencing the most pressures by the terrorist groups.

They added that the technical aspects of the plan have been studied and prepared by Russia, saying that the plan can be implemented upon Russian President Vladimir Putin's order after Damascus' official request.
A Russian daily reported earlier this month that the country's soldiers are about to shoulder the responsibility of restoring security to the Christian-populated regions during the Syrian Army's imminent anti-terrorism operations in Northern Hama.

Federal authorities are running nuclear response drills at MetLife Stadium in northern New Jersey.
Homeland Security and FEMA are conducting Operation Gotham Shield.  The purpose is to practice how to assess, treat and evacuate victims during a potential nuclear attack in the New York City area.
The drills simulate a scenario in which a 10,000 ton improvised nuclear device goes off on the New Jersey side of the Lincoln Tunnel
MetLife Stadium is serving as the primary response center during the multi-day drills.  The stadium is in East Rutherford, about 15 minutes outside of Manhattan.

The New Jersey and New York emergency management organizations are also taking part.
The exercise is part of several that are taking place along the Northeast Corridor.  Other drills are taking place in Washington, D.C. and Albany.

That was the method used in the Paris attacks in November 2015, in which 130 people were killed. A similar but smaller-scale attack happened just weeks ago in London.
Organized by the Metropolitan Washington Council of Governments (MWCOG), the exercise will let law enforcement personnel and other first responders from across the area test their abilities to communicate and respond to multiple, rapidly developing terror attacks that may be different in scale and severity.


“We want to look at lessons learned overseas and what’s going in Europe, and vehicle-borne type attacks. That’s something we’re seeing overseas, and we want to know how that would play out here in the United States,” said Pavlik.


Scott Boggs, managing director of homeland security and public safety at the Council of Governments, said it’s impossible to prepare for a specific threat in this era.
“Unfortunately, the threat picture changes with every incident that happens around the world, and we can’t [so much] focus on a single threat, as much as try to prepare to the degree we can [what] we learn about known threats through intelligence,” said Boggs.

“The Catholic Church…has become one of Islam’s loudest boosters”

Science Is Not God, So Why Do So Many People Keep Trying To Turn It Into A Religion?

Why We Have A 2nd Amendment: Venezuela Plans To Give Firearms To Loyalists To Purge Growing Resistance

Why Taxation is Slavery: Words From Frederick Douglass

We can exhale in peace for now. Apparently Trump is deciding to make a solution with North Korea that doesn't have to involve conflict.

Nevertheless, Our Lord has more than one way to earn His children.