Wikileaks Claims 99% Of Vault 7 Not Yet Released

WikiLeaks Claims 99 Percent Of Vault 7 Not Yet Released

Less than one percent of WikiLeaks’ CIA files were released in yesterday’s document dump, the anti-secrecy organization claimed Wednesday.
WikiLeaks has already indicated that its cache of stolen CIA files, which the group is calling “Vault 7,” will be dripped out over a series of releases.
The group used similar methods in publishing emails stolen from the Democratic National Committee and Hillary Clinton campaign manager John Podesta.

WikiLeaks says it obtained the CIA files after the agency “lost control” of the documents after they began circulating among a 5,000-person network of former U.S. government hackers and contractors, one of whom WikiLeaks claims is the one who leaked the documents.

Preliminary reports indicate that the document dump could have a more significant impact than the Edward Snowden leaks in 2013, which revealed the extent of the NSA’s surveillance program.

Huge False Flag By The CIA Against Americans, Just Exposed By WikiLeaks

While Stefan Stanford touched on some very troubling aspects of the recent WikiLeaks document dump on the CIA and their spying tools in his most recent article, looking back at the Obama administration's claims that "Russia" hacked the election, influencing voters for an outcome Obama himself fought against, claiming that the intelligence community had evidence (which they never produced) of Russia's cyber "fingerprints," Wikileaks may have just exposed what may very well be a huge "false flags," carried out by the CIA, with the help of the mainstream media,  against Americans.

A simple search using any search engine brings up literally hundreds of pages of MSM reports discussing the 2016 election, how Russia's "fingerprints" were all over it, but Washington Post consistently cited "CIA" sources for their bombshell "news", such as one from December 2016 titled "Secret CIA assessment says Russia was trying to help Trump win White House," with each story automatically assuming that Russia influenced the election because the intel community said so, because they traced it all back to Russia's cyber fingerprints. (Note that WAPO never offers a disclaimer informing their readers that WAPO owner Jeff Bezos has ties with the CIA via a $600 million contract.)

It wasn't just the Washington Post that reported "Russian" interference as if it were a foregone conclusion, but all the mainstream media did so, citing unnamed U.S. officials claiming "Russian ‘digital fingerprints’ all over election hacks," with the following quote from Fox 8(citing a CNN report) being representative of the consistent reporting since the November election:

At the same time that the CIA led intel community was asserting Russian "fingerprints" were all over the election, Washington Post dropped another bombshell (which they changed, added a correction, then followed up by writing another article which basically retracted the fake news" story some "intel" official fed them) claiming Russia hacked into the U.S. power grid!

Part of the WikiLeaks "Vault 7: CIA Hacking Tools Revealed," includes a specific section they highlighted on their Twitter page, detailing a program called "UMBRAGE" which exposed that the "CIA'S Remote Devices Branch's UMBRAGE Group collects and maintains a substantial library of attack techniques ‘stolen’ from malware produced in other states including the Russian Federation. With UMBRAGE and related projects the CIA cannot only increase its total number of attack types but also misdirect attribution by leaving behind the ‘fingerprints’ of the groups that the attack techniques were stolen from."

How did the Obama administration, the intelligence community, and the MSM justify accusing Russia of being behind the DNC and the Clinton campaign hacks? "Fingerprints."

Another U.S. official told CBS News that the Obama administration believes Russian state actors are behind the leak, confirming the hackers "left all kinds of fingerprints."

Entrepreneur, Innovator, Gamer, Artist, Internet Freedom Fighter, KimDotCom, pretty much sums up what this portion of the Wikileaks revelations tell us, when he states, "CIA uses techniques to make cyber attacks look like they originated from enemy state. It turns DNC/Russia hack allegation by CIA into a JOKE." 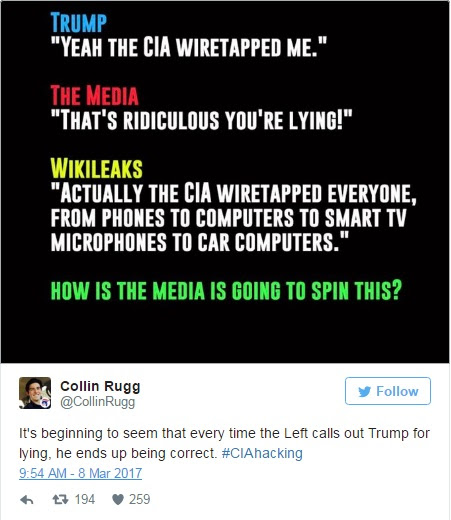 That is a question I was wondering yesterday while watching the amount of information WikiLeaks exposed about the CIA and their level of spying on Americans, but specifically on how WikiLeaks has just exposed their UMBRAGE program where they can basically plant anyone's digital "fingerprints," in order to accuse that someone of anything they want, in order to manipulate the American public into believe a false narrative.

Looks like the CIA gave their puppets over at Washington Post their marching orders and the preferred narrative as the WAPO headlines with "FBI prepares for new hunt for WikiLeaks’ source," and after reading it, we note there is not one mention of whatWikiLeaks exposed, nor the UMBRAGE program, nor the level of surveillance the CIA conducts on all Americans via their electronics. Just the attempt to only focus on the  "who" is behind the leaks and what they mean for the intelligence community.

So I virtually marched over to the New York Times to see what type of spin they decided on, had to do a word search on their front page just to find the mention of WikiLeaks on it, and all the way at the bottom in the "technology" category, they had two pieces, one titled "With WikiLeaks Claims of C.I.A. Hacking, How Vulnerable Is Your Smartphone?" and another "WikiLeaks Reignites Tensions Between Silicon Valley and Spy Agencies."Nothing from either on UMBRAGE and how the CIA creates "false flag" attacks using the "fingerprints" and malware they keep in their library to frame other countries.Zip. Nada. Nothing.Why? Well let me take a guess, perhaps because it completely unravels the narrative they have been shoving down their readers' throats that Russia hacked the DNC and the Clinton campaign, which somehow "influenced" the 2016 presidential election?

A leader of the Christian charismatic movement has declared that the unprecedented resistance to U.S. President Donald Trump signals a deeper, spiritual battle that is taking place over America’s soul.

Lou Engle, the founder of several Christian ministries, has highlighted two recent events that give cause for concern to Christians: the Women’s March on Washington, with its close alliance with the U.S. abortion lobby, and recent calls to use witchcraft to “bind” and utterly destroy the president.

In an essay in Charisma Magazine, the charismatic leader of “The Call” wrote that the Women’s March “was the first shot across the bow, heralding a revolutionary rise against the president of the United States,” and the fellow citizens who elected him. The March was also an uprising against “the foundational biblical truths upon which our nation was founded,” Engle said.

“Soon after, the second shot was manifested publicly: an unprecedented global summons of witchcraft to curse President Trump, his Cabinet and all of those aligned with a biblical worldview,” Engle wrote. “Suddenly, the whole controversy was elevated to a global spiritual dimension, inaugurating a spiritual battle that cannot be won on the playing field of protests and political arguments.”
“Only the church has the answer to this unprecedented manifestation of witchcraft. Spiritual strategy must be used to overcome this open-faced, brazen challenge of the powers,” he said.
Understanding fierce ideological battles in spiritual terms is no novelty for Christians. As Saint Paul wrote some 2,000 years ago, “we wrestle not against flesh and blood, but against principalities, against powers, against the rulers of the darkness of this world, against spiritual wickedness in high places.”

“Trump is in Danger”

The man who predicted that Wikileaks release of John Podesta’s emails would bring down Hillary Clinton’s presidential campaign is now warning that President Donald Trump is in danger.
Kim Dotcom (born Kim Schmitz), was the founder of the infamous and now-defunct file hosting service Megaupload and is known to have close connections to Wikileaks and Julian Assange.
During a September 2016 interview with Bloomberg, Kim said, “Julian Assange is going to be Hillary Clinton’s worst nightmare.”
Just a month later, he was proven correct when Wikileaks began publishing thousands of emails from John Podesta’s email account, revelations which continued right up until the election and played a huge part in Hillary’s defeat.
Following Wikileaks ‘Vault 7’ release of CIA files and the intensification of Donald Trump’s battle with the deep state, Kim warned in a tweet today that “Trump is in danger”.

“The White House leaks are coming from a rogue group within the CIA. They want to stop the Trump presidency. This is NOT speculation,” he also tweeted, adding, “Rogue group of Obama loyalists at CIA used powerful cyber warfare tools illegally to spy on Trump & fabricated Russia narrative. BIG DANGER!”
Kim later responded to a question about what Donald Trump should do to protect himself by answering, “Appoint new FBI leadership –Get FBI agents from outside DC to investigate CIA & NSA for all unlawful activities. One domino falls, game over.”

Was Every 'Conspiracy Theorist' in America Just Vindicated?

Yes, the government can use your phone, your computer and even potentially your television to spy on what you are doing inside your own home.
On Tuesday, WikiLeaks released thousands of documents that prove what virtually every "conspiracy theorist" in America has been saying for years about government spying. And I don't even like to use the term "conspiracy theorist" much, because the truth is that most "conspiracy theorists" are simply citizen journalists who are attempting to expose things the mainstream media doesn't want to talk about. And one of the things that the mainstream media has always been hesitant to address is the unconstitutional surveillance that U.S. intelligence agencies systematically conduct on their own citizens.

But now the mainstream media is being forced to talk about government surveillance because WikiLeaks has just exposed it for all the world to see. According to WikiLeaks, the CIA has been secretly running "its 'own NSA' with even less accountability and without publicly answering the question as to whether such a massive budgetary spend on duplicating the capacities of a rival agency could be justified". It is known as the Central Intelligence Agency's Center for Cyber Intelligence, and it has produced "more than a thousand hacking systems, trojans, viruses and other 'weaponized' malware." In fact, the computer or phone that you are reading this article on may be infected with one of their programs right now.

The documents that were released by Wikileaks show that government spooks can remotely take control of Apple iPhones, Google Android phones, Microsoft Windows operating systems and Samsung smart televisions, and once in control of those devices, they can use them to spy on their owners.

The ironic thing is that while Barack Obama and members of Congress have been accusing Russia of conducting cyberattacks, the truth is that U.S. intelligence agencies have been perhaps the biggest offenders of all.

This is an absolutely massive scandal, and I truly hope it gets the attention that it deserves in the days ahead. The following is a portion of the press release Wikileaks issued on Tuesday:

In the documents WikiLeaks has just released, there is even discussion about the CIA potentially being able to infect a vehicle control system. Presumably, the goal would be to remotely take control of a vehicle and either spy on the occupants or kill them by driving into an obstacle at very high speed.
And if you can believe it, the CIA has also been developing ways to make it look like a cyberattack that they conducted actually came from the Russians. The following comes from an article by Jerome Corsi:

Peter Schweizer: The Deep State Is Real - A 'Threat to Our Republic Form of Government'