A growing US presence off the Korean Peninsula is reportedly part of a plan aimed at 'incapacitating' Kim Jong-Un's despotic regime in Pyongyang should conflict break out.
A nuclear-powered US aircraft carrier arrived in South Korea on Wednesday for joint military exercises in the latest show of force against the North.
The USS Carl Vinson arrived at the southern port of Busan as US Secretary of State Rex Tillerson began a tour of the region, where tensions have escalated in recent weeks with missile launches from the nuclear-armed North and the assassination of Kim Jong-Un's estranged half-brother in Malaysia.
More than 80 aircraft, including the fighter aircraft F/A-18F Super Hornet, the E-2C Hawkeye and the carrier-based EA-18G Growler are on board the supercarrier.
South Korea's Yonhap News Agency claims the heightened military presence is part of a plan to decapitate North Korean leadership.
They claim a military official, who wished to remain anonymous, told them: 'A bigger number of and more diverse U.S. special operation forces will take part in this year's Foal Eagle and Key Resolve exercises to practice missions to infiltrate into the North, remove the North's war command and demolition of its key military facilities.'
The aircraft carrier and a US destroyer will conduct naval drills including an anti-submarine manoeuvre with South Koreans in waters off the Korean peninsula as part of the annual Foal Eagle exercise.
Washington insist they are purely defensive in nature.
Rear Admiral James Kilby, commander of USS Carl Vinson Carrier Strike Group 1, said: 'The importance of the exercise is to continue to build our alliance and our relationship and strengthen that working relationship between our ships.'

He said he would attack his Western enemies from “ground, air, sea and underwater” in a sabre-rattling statement released through state media.
The propaganda press agency KCNA indicated the blood-thirsty despot was becoming increasingly agitated by the joint military drills south of the border.
A statement attributed to Kim said: “If they infringe on the DPRK's sovereignty and dignity even a bit, its army will launch merciless ultra-precision strikes from ground, air, sea and underwater.
“On March 11 alone, many enemy carrier-based aircraft flew along a course near territorial air and waters of the DPRK to stage drills of dropping bombs and making surprise attacks on the ground targets of its army.”

This latest fiery statement was issued as an aircraft carrier strike group led by the USS Carl Vinson joined South Korean military forces for exercises.
North Korea, which has alarmed its neighbours with two nuclear tests and a string of missile launches since last year, said the arrival of the US strike group was part of a "reckless scheme" to attack it.
The murder in Malaysia last month of North Korean leader Kim Jong Un's estranged half-brother has added to a sense of urgency to efforts to handle North Korea.
Compounding regional tension, China is vehemently opposed to the deployment in South Korea of an advanced US anti-missile system.
America and South Korea say the Terminal High Altitude Area Defense anti-missile system is for defence against North Korea, but China fears its powerful radar can probe deep into its territory and compromise its security.
The US began to deploy the system a week ago, a day after North Korea launched its latest four missile tests.

A look at Steve Quayle's archives shows links to more than 20 stories about North Korea in the month of March alone with the recentstory from Zero Hedge reporting North Korea has put its army into 'combat mode'. Meanwhile, the brand new story from the Daily Mail this morning reports the 'US is preparing to incapacitate Kim Jong Un', moving the USS Carl Vinson into South Korea with a huge fleet of fighter jets.

According to a South Korean military source, the heightened military presence is part of a plan to 'decapitate the North Korean leadership'. The story from Reuters Quayle linked to on Tuesday reports North Korea has warned the United States of 'merciless attacks' if the massive aircraft carrier infringes upon the 'sovereignty or dignity' of North Korea.
Setting the world up for dangerous tensions, every year US military exercises with South Korea provoke the ire and suspicions of North Korea and their leader Kim Jong Un. This years massive exercises may be no different. But while Washington DC says the drills are simply of a defensive nature, Kim and North Korea aren't so sure.
The nuclear powered USS Carl Vinson is carrying more than 80 aircraft including the fighter aircraft F/A-18F Super Hornet , the E-2C Hawkeye and the carrier-based EA-18G Growler and its arrival in South Korea is only part of a huge special forces mission taking part in Operations Foal Eagle and Key Resolve. The Daily Mail story reports the exercises are "practice missions to infiltrate into the North, remove the North's war command and the demolition of its key military facilities."
With that explanation of the drills itself helping to explain why Kim and NKorea are so suspicious, several huge wild cards can be thrown into the mix with China and the two NKorean satellites that pass over America several times daily. 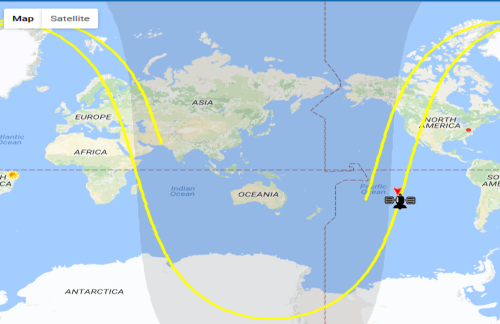 As we write this story, KMS 3-2 has just finished its latest passage over the US, a passage that it makes several times every day. NKorean satellite KMS-4 also passes over the US several times daily and while they are officially called 'Earth observation satellites', according to this April 2016 story from E Michael Maloof over at WND, "both are capable of performing a surprise electromagnetic pulse attack at an altitude and trajectory that evade US National Missile Defenses" according to a national security expert.  You can get 10-day predictions for when KMS 3-2 will pass near your house here while the link to when KMS-4 will be nearby is right here if you're interested in tracking these satellites yourselves. From the WND story:
Peter Vincent Pry told G2 Bulletin that the satellites can be commanded either to deorbit and hit a target on the ground or explode at a high altitude to create an EMP effect that would knock out the unprotected U.S. national electrical grid system and all life-sustaining critical infrastructures that depend on it.

If the US is preparing to 'take out' North Korean leadership, we hope that they're preparing to 'take out' KMS 3-2 and KMS-4 as well. As Dr. Pry reported in a story he submitted to ANP back on February 21st, "this doomsday scenario has become plausible enough to compel the US to take active measures".  As Dr. Pry and Ambassador R. James Woolsey reported in a February 15th story they submitted to ANP, "Steps Were Finally To Be Taken To Prevent 'Societal Mass Destruction' As Grid-Protecting CIPA Is Enacted - But Will It Be In Time?"

Back in January of 2016, we published a story on ANP in which we reported Kim Jong Un had already practiced EMP attacks upon America in a story we titled "The Problem From Hell - 'Doomsday' Passes Over America Several Times Almost Every Day". Those 'doomsday' satellite passes over America continue every day, unabated.

North Korea has warned they could take down ALL of America, all at once. The only possible way they could do that would be via EMP. Nuclear experts know a single nuke, even one of Russia's 'city destroying Satan 2' nukes, couldn't take out ALL of America. An EMP is the one way North Korea and Kim could send our nation back to the dark ages - and experts have warned "everything would change in one moment". Think a NKorean EMP over America wouldn't turn into global nuclear war almost instantly?

We fellow Americans voted for Donald J. Trump to become a president because we believed he would bring the country back to order and stability.

Clearly that is not the case. Clearly he is bringing us to global warfare.

Let us all agree never to vote for anyone ever again.

We will only trust in Our Lord alone.

Trump, personally, is bringing us to global warfare? How exactly is he doing this?

If President Trump is not the one waving the green flag for military operations in China, Korea, and Eastern Europe, not to mention sending troops to Syria without Assad's permission, then it doesn't matter if he is president or not.

We just need to remember that no matter who is in the White House God's will will be done and is being done. And we know that only Jesus will make things great again. Come quickly, Lord!!

We don't Have to read too far into Revelation to know that things get really bad, so unfortunately, things are only going to worsen......but God will shorten that season. Nothing that's happening is a surprise to God.....that gives me great comfort.

Brother Ivan, Um, President Trump has only been President how many days? and yet you are attributing "global warfare" to him that hasnt even occurred? He is doing the best he can under enormous attacks. You are making unfounded conclusions, that are more than a wee bit beyond premature. God allowed him to become our President, and has for a time, most likely a short time, allowed His Grace for those who are yet to be Saved for He wants no one to perish.
Not "vote ever again"? What? That kinda mentality is why ovomit was elected, and millions suffered because of that...it is an Honor to Vote in this Great Nation, the shed blood & sacrifices made by those who came before us require that we do...

I was only making a point of "if you think it's bad now, it will only get worse". I get the feeling that people think Trump (or someone) is going to stop what God has already told us will happen. Nothing will stop what was revealed to John....just glad we won't be here for any of it. Not sure what I commented that made you think I thought we would be there for it, but we will be with Christ.

U have a gd point,but Trump is not waving the flag

I remember at the beginning of the summer last yr I thought things were going to blow,it was wrong. Rt now I can hardly speek,things are so interesting. It's totally unbelievable unless u know the lord & his word.I wish I could understand Daniel 12 better.there's a few pieces I just can't grasp,but it's all rt there before me.

I remember at the beginning of the summer last yr I thought things were going to blow,i was wrong. Rt now I can hardly speek,things are so interesting. It's totally unbelievable unless u know the lord & his word.I wish I could understand Daniel 12 better.there's a few pieces I just can't grasp,but it's all rt there before me.

I read Scott's Prophecy Update with joy and great anticipation. I'm in agreement that our time here is short according to Bible Prophecy and current events. God allowed President Trump as well as past presidents to be elected in order to fulfil his plans. I so look forward to the time when we will all be with Him and the other saints to honor and praise Him for eternity for all the things he has done for us! Maranatha! Lord come quickly!