Defense Sec. James Mattis: North Korea 'Has Got to Be Stopped'

After years of North Korea thumbing its nose at the international community, on Friday Defense Secretary James Mattis appeared to signal enough was enough.
"Right now, [North Korea] appears to be going in a very reckless manner … and that has got to be stopped," Mattis said at a press conference in London.
He didn't give any details about how the administration of President Donald Trump plans to deal with the reclusive nation, which, under Kim Jong Un, has drastically increased its missile and nuclear-testing program.

But Mattis' remarks continue a recent trend of Trump officials taking a harder line on North Korea.
Earlier this month, Secretary of State Rex Tillerson said that the "diplomatic … efforts of the past 20 years to bring North Korea to a point of de-nuclearization have failed."
He also said that military action was "on the table."
Many experts say that Trump's options are limited, however.
Kim has pledged to develop weapons capable of striking the U.S. and its allies. Three of the country's nuclear tests were completed under his rule and he conducted more missile tests over the past four years than in the rest of the country's history.
Trump could try to levy more sanctions on the country, although these have not stopped previous tests and Tillerson appeared to dismiss this approach earlier this month.

Russian submarines have increased combat patrols to the level last seen during the Cold War, the navy chief said today.
Admiral Vladimir Korolyov said Russian submarine crews spent more than 3,000 days on patrol last year, matching the Soviet-era operational tempo.
Elsewhere today, Russian President Vladimir Putin's top spokesman said the relationship between the U.S. and Russia may be more antagonistic now than it was during the decades-long Cold War.
Asked by ABC's 'Good Morning America' host George Stephanopoulos if the U.S. and Russia were in a 'new Cold War,' Dmitry Peskov said the current situation may be worse, pinning the blaming on the U.S.
He said: 'New Cold War? Well, maybe even worse. Maybe even worse taking into account actions of the present presidential administration in Washington.'

Mr Korolyov spoke after attending the launch of a new Yasen-class nuclear-powered attack submarine called the Kazan.
He hailed the new ship as the most modern in the world, emphasizing its low noise level making it hard to track it.
'It represents the cutting edge of nuclear submarine design,' Mr Korolyov said in televised remarks.
The navy plans to commission seven Yasen-class submarines that are armed with torpedoes and long-range Kalibr cruise missiles, which for the first time have been tested in combat during the Russian campaign in Syria.

The Supreme Court of Venezuela has announced it will take over all of the duties of the country’s legislature. The opposition party says the country has crossed a line into an outright dictatorship. From the Miami Herald:

In a ruling published late Wednesday, the Supreme Court said that while the National Assembly continued to defy court rulings all of its actions were “invalid” and that “the activities of the parliament would be exercised directly by [this court].”

The clash of the branches goes back to January 2016, when the National Assembly swore in three opposition representatives from Amazon state even as the court had decided to investigate their election amid suspicions of voter fraud. That investigation is ongoing and the opposition has said the court is simply trying to rob them of their super majority…

Opposition Congressman Freddy Guevara, with the Voluntad Popular party said the court decision wasn’t “just another ruling” and called for street demonstrations and “democratic resistance” to defend the country’s institutions.
“This ruling marks a point of no return for this dictatorship,” he said.
Reuters reports the opposition released a statement saying, “This unconstitutional sentence that we reject … cements another step in the dismantling of Venezuela’s democracy. The statement added, “This government is dying, and that’s why it’s turning to these desperate measures.”
This is just the latest move in an ongoing power struggle within the country between the ruling socialists led by President Maduro and the opposition party which has gained power as the country has suffered from chronic shortages of food and medicine as well as one of the highest crime rates in the world and rampant inflation. There were massive street protests against the socialist government in 2014 which resulted in the arrest and imprisonment of opposition leader Leopoldo Lopez on trumped up charges.

Rare Total Solar Eclipse Coming Soon Hasn't Happened Since 1918... but Here's Where It Gets Weird

It’s being called “The Big One”.
Coming this summer, we will see an event unlike any we’ve seen in North America since 1918: a total solar eclipse crossing the entire United States in a line from coast to coast on August 21, 2017.

And that’s not all…
If you plot the two total eclipse paths on a map, it would appear the giant “X” intersects right over the New Madrid fault line near Cape Girardeau, Missouri and Paducah, Kentucky — which will thus see two total solar eclipses in less than seven years. 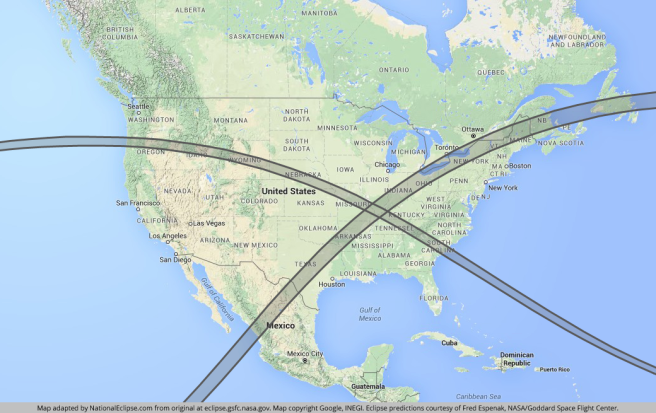 You cannot doubt the arrival of world war when Russia begins mobilizing her weapons and machines.

Um, yes you can "doubt" any arrival of a "world war". That will happen in the Tribulation, which we His Church, will NOT be a part of....btw Gog/Russia will be annihilated by God Himself on the mountains surrounding Israel when they invade the severely wounded/defenseless, Israel. Ezekiel 38/39 is NOT an event that takes place during the Trib....