A huge spot has appeared on the sun that could send dangerous solar flares down to Earth.
The sunspot, dubbed AR2665, is 74,560 miles (120,000 kilometres) wide – big enough to be seen from Earth.
Experts have warned that the spot is large enough to produce 'M-class' solar flares, which can cause radio blackouts on Earth, knock out communications satellites and create radiation storms.
This sunspot is the first to appear after the sun was spotless for 2 days. Like freckles on the face of the sun, they appear to be small features, but size is relative: The dark core of this sunspot is larger than Earth as shown by this graphic

Nasa's Solar Dynamics Observatory first detected the huge spot last week, and it appears to have lingered through to this week.
Sunspots are darker, cooler areas on the surface of the sun, caused by interactions with the sun's magnetic field.
They tend to appear in regions of intense magnetic activity, and when that energy is released, solar flares and huge storms erupt from sunspots.
Such a storm could create stunning auroras around the world, as well as play havoc with power grids, potentially causing blackouts in some areas.
In a statement, Nasa said: 'A new sunspot group has rotated into view and seems to be growing rather quickly.
'It is the first sunspot to appear after the sun was spotless for two days, and it is the only sunspot group on the sun at this moment.

'It could be the source for some solar flares, but it is too early to predict just what it will do.'
Forecasters from the NOAA say that there is a 25 per cent chance of M-class flares today, because the sunspot is directly facing our planet.
While the sunspot could be a threat to Earth, it also provides a chance for keen photographers to capture rare images of the sun.
Speaking to SpaceWeather.com, Mr Bruno Boni de Oliveira, an amateur photographer, said: 'For months I've been observing airplanes flying through the sun on their way to Newark airport.

However, I've never been successful in capturing the perfect shot because the sun is usually too bright for a proper exposure.
'On July 11th, summer haze and NYC pollution allowed me properly expose the sun at a good angle for the busy air traffic route, just a few minutes before the sunset.
'As I focused, surprise: There was a sunspot! I quickly checked Spaceweather.com to find out it was the huge AR2665.' 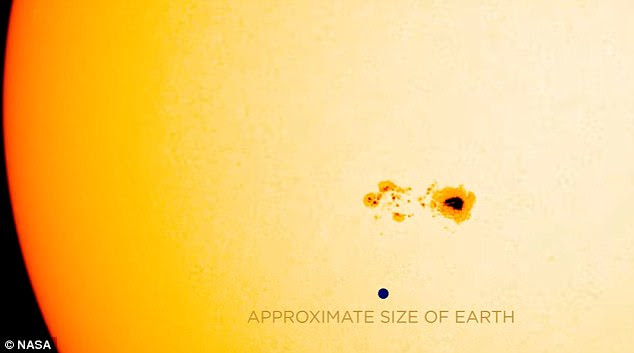 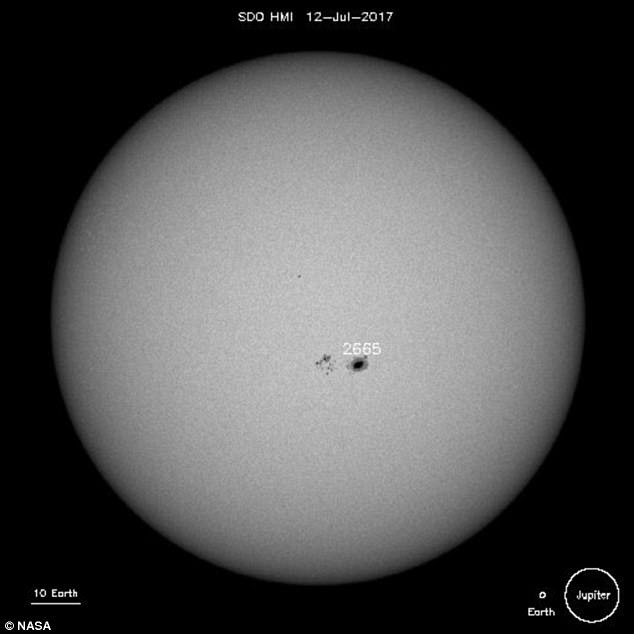