The White House releases some excerpts from US President Donald Trump’s imminent speech to Muslim leaders from 35 nations gathered for an Islamic-American summit in the Saudi capital Riyadh today.

Some passages from the excerpts are quoted by various media outlets. He are the excerpts in their entirety as released by the White House:

We are adopting a principled realism, rooted in common values and shared interests.
Our friends will never question our support, and our enemies will never doubt our determination. Our partnerships will advance security through stability, not through radical disruption. We will make decisions based on real-world outcomes – not inflexible ideology. We will be guided by the lessons of experience, not the confines of rigid thinking. And, wherever possible, we will seek gradual reforms – not sudden intervention.
Our goal is a coalition of nations who share the aim of stamping out extremism and providing our children a hopeful future that does honor to God.
———
America is a sovereign nation and our first priority is always the safety and security of our citizens. We are not here to lecture—we are not here to tell other people how to live, what to do, who to be, or how to worship. Instead, we are here to offer partnership – based on shared interests and values – to pursue a better future for us all.
Every time a terrorist murders an innocent person, and falsely invokes the name of God, it should be an insult to every person of faith.
But we can only overcome this evil if the forces of good are united and strong – and if everyone in this room does their fair share and fulfills their part of the burden.
Terrorism has spread across the world. But the path to peace begins right here, on this ancient soil, in this sacred land.
America is prepared to stand with you – in pursuit of shared interests and common security.
But the nations of the Middle East cannot wait for American power to crush this enemy for them. The nations of the Middle East will have to decide what kind of future they want for themselves, for their countries, and for their children.
———
This is not a battle between different faiths, different sects, or different civilizations.
This is a battle between barbaric criminals who seek to obliterate human life, and decent people of all religions who seek to protect it.
This is a battle between good and evil.
———
That means honestly confronting the crisis of Islamist extremism and the Islamist terror groups it inspires. And it means standing together against the murder of innocent Muslims, the oppression of women, the persecution of Jews, and the slaughter of Christians.
Religious leaders must make this absolutely clear: Barbarism will deliver you no glory – piety to evil will bring you no dignity. If you choose the path of terror, your life will be empty, your life will be brief, and your soul will be condemned.

In key address to Muslim leaders, president to call for end to ‘slaughter of Christians, persecution of Jews,’ but also to declare that world is not facing a battle between faiths

US President Donald Trump is to urge the Islamic world to confront “Islamist extremism” in a highly anticipated speech Sunday to dozens of Muslim leaders in Saudi Arabia.

According to excerpts released by the White House, Trump will say the time has come for “honestly confronting the crisis of Islamist extremism,” calling on religious leaders to condemn extremist attacks.

But Trump, who has been accused of anti-Islamic rhetoric in the past, will also extend a hand by insisting that “this is not a battle between different faiths.”

He will also call for the leaders to stand together against “the murder of innocent Muslims, the oppression of women, the persecution of Jews, and the slaughter of Christians.”

The speech comes on the second day of a visit to Saudi Arabia, part of Trump’s first foreign tour that will take him next to Israel and the Palestinian territories and then to Europe.

The first day saw the announcement of hundreds of billions of dollars in trade deals, welcome news for Trump as he faces mounting troubles at home linked with the probe into alleged Russian meddling during last year’s election campaign.

WATCH: Israeli-American coalition takes on 'enemy' aircraft in the south

An Israeli-American aerial coalition squared off against enemy forces in southern Israel, sustaining heavy (mock) losses, but learning invaluable lessons along the way, an IDF official said Sunday, speaking to reporters at the end of a two-week exercise.

This month, the US and Israeli Air Forces dominated the Jewish state’s southern airspace for the annual Juniper Falcon exercise, staging dogfights and bombing runs against an enemy nation: Stallion.

The Stallion forces were, in fact, Israeli forces. The air force’s Flying Dragon Squadron, also known as the Red Squadron, played the role of enemy aircraft in the drill.

Though the Flying Dragon Squadron operates F-16 fighter jets, in the exercise they behaved like Sukhoi-35, MiG-29 and MiG-21 jets. The Stallion military also used SA-2, SA-6 and SA-22 anti-aircraft batteries against the US-Israeli coalition forces, the IAF officer said, speaking on condition of anonymity due to his sensitive position. 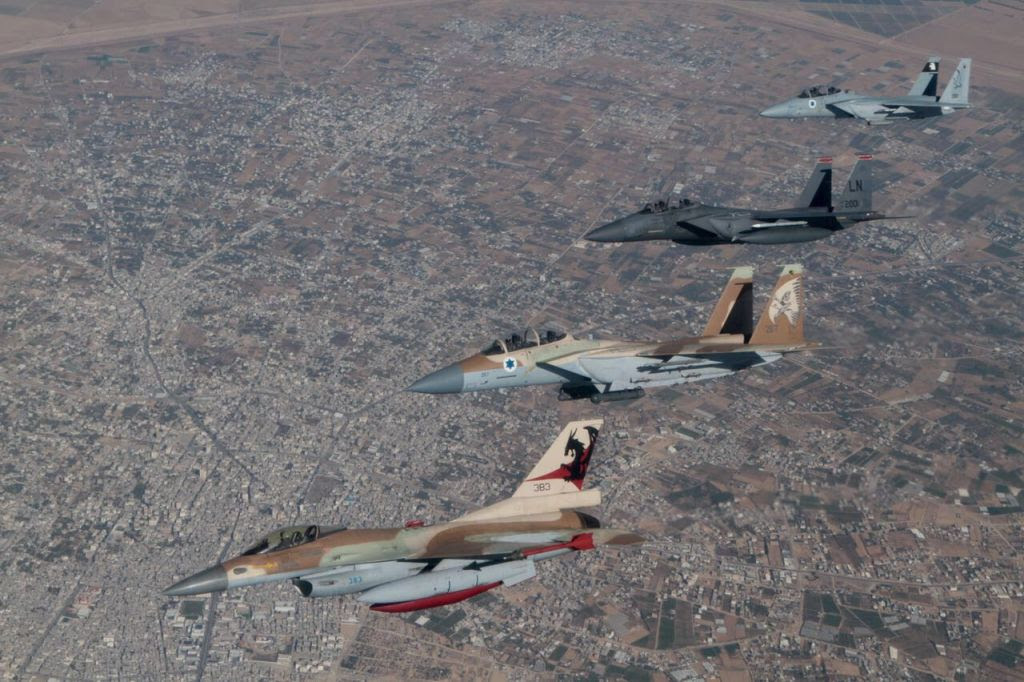 The exercise was based in the IAF’s Ovda air base, just north of Eilat, but the simulated fighting took part throughout the Arava desert.

“They all depended on one another, and only cooperation let them reach their goals,” the air force official said.

The Israeli and American pilots were responsible for defending specific sites, like control towers or congregations of allied forces.

Hundreds of thousands of Venezuelans took to the streets on Saturday to mark 50 days of protests against the unpopular government of President Nicolas Maduro, with unrest gaining momentum despite a rising death toll and chaotic scenes of nighttime looting.
At least 46 people have been killed in the worst turmoil faced by Maduro since he won the presidency in 2013. Venezuelans from civilians to police have been killed, sometimes during increasingly frequent spates of looting or street melees.
Many Venezuelans are furious with Maduro's government, blaming it for soaring inflation, shortages of everything from food to medicine, and a crackdown on human rights. They are demanding elections, freedom for jailed activists, foreign aid, and autonomy for the opposition-led legislature.
Major opposition marches took place across the oil-rich nation of 30 million on Saturday, with protesters in Caracas brandishing placards that read “No More dictatorship in Venezuela” while in the volatile border city of San Cristobal masked youths threw rocks, and a Reuters witness saw two protesters wielding machetes.
The Andean area near Colombia suffered a week of mayhem that included looting, prompting the government to send in 2,000 troops.

The government, which says protesters are trying to foment a coup beneath pro-democracy rhetoric, held a counter-march in Caracas, with thousands of red-clad supporters singing and dancing. Officials frequently pop up on state television with photos of vandalized stores and blocked roads that they blame on the opposition.
In recent weeks, protesters have thrown everything from excrement to petrol bombs at security forces, who have used tear gas and rubber bullets to block marches. Opposition lawmakers have joined protesters, often facing tear gas themselves.

They Killed the Tsar – Now the Globalists Target Putin

Finally, there is a humongous difference in between way the Great Game was played during the time of the Tsars, and now. Nuclear holocaust notwithstanding, the Wall Street (American) and European positions are at critical mass. The financial monopolist warfare that has raged for the last 100 years left Russia more or less in tact where physical resource wealth is concerned. But in the west real wealth is depleted, overleveraged, and on top of a huge bubble.

“When I was young, America still existed. No more. Not even the blather from the 4th of July can hide the obvious fact.” Dr. Paul Craig Roberts

Without launching into a macroeconomics lesson, the modern “internationalist” cannot extend their reign without another Russian revolution. Look at something Dr. Paul Craig Roberts wrote recently in his article “America Destroyed”. Speaking in much the same way I do here, Dr. Roberts tells us that the young do not realize what is “lost”, for they are living in the time after a so-called “American Dream” existed. The former succinctly and sullenly describes a country where every facet of society has been massively corrupted. From Wall Street, the malignant disease these internationalist or globalists have wrought, it’s nearly completely destroyed any semblance of what we stood for. Roberts goes on:

“America is a lost country. The total corruption of every public and private institution is complete. Nothing remains but tyranny. And lies. Endless lies.”

Some months ago I wrote a story about Vladimir Putin and a “Third Way” for society, which some believe the Russian leadership is in the process of establishing. While I have no access to learn any exactitudes of such a revolutionary plan, all the evidence from our failures and crises of the past and present point to the pragmatic logic Putin might be entertaining. Citing Antony C. Sutton’s work on our “internationalists” once again (pg. 16), my point can more easily be made.

“Both the extreme right and the extreme left of the conventional political spectrum are absolutely collectivist. The national socialist (for example, the fascist) and the international socialist (for example, the Communist) both recommend totalitarian politico-economic systems based on naked, unfettered political power and individual coercion. Both systems require monopoly control of society. While monopoly control of industries was once the objective of J. P. Morgan and J. D. Rockefeller, by the late nineteenth century the inner sanctums of Wall Street understood that the most efficient way to gain an unchallenged monopoly was to “go political” and make society go to work for the monopolists – under the name of the public good and the public interest.”

If Vladimir Putin were to fall from power, then the globalists-monopolists could expand into a final stage of global domination. In turn, their unfettered destruction and immorality would spread on a global scale, the same pitiful lie the American Dream became. Russia’s resources would be squandered, the wealth of all the world’s peoples would finally become the property of the sole proprietors of our misery. For a multitude, this reality is hidden or convoluted by an Orwellian media conglomerate in the west. This is no longer even an arguable point of contention. Fortunately, millions on millions are awakening to discover the tyranny that envelops us. The globalists murdered Russia and an alternative reality once, we must not allow them to revisit the crime.

But, Mr. Trump, this is a battle between different faiths, different sects, and different civilizations. Ultimately it's a battle of the forces of evil against the One True God. And our God wins. Yeehaw! Maranatha! Soon!

BTW: I like the graphic update on the Update, Scott!

Dave - I'm back to experimenting with this...The volume is so high now I'm thinking of a briefer format with just one paragraph per article, but I haven't seen a format I like yet