Hundreds of Palestinian protesters clashed with Israeli troops across the West Bank on Monday in violent demonstrations in support of hunger-striking security prisoners.

The protests coincided with the arrival of US President Donald Trump in Israel. He will meet with Palestinian Authority President Mahmoud Abbas on Tuesday.

But Palestinians have taken part in demonstrations on an almost daily basis in the West Bank and Gaza Strip in solidarity with the more than 1,000 Palestinian security prisoners refusing food in Israeli prisons, who have reached the 36th day of their hunger strike.

According to the Palestinian Red Crescent Society, approximately 100 Palestinians were injured during the clashes, to varying degrees. A small number were said injured by live fire, eight from burns and scrapes, 20 by rubber bullets and dozens from tear gas inhalation.
According to a Red Crescent spokesperson, none of the injured were in serious condition.
One of the larger protests on Monday took place in Qalandiya, north of Jerusalem, where approximately 100 Palestinians took part in the violent demonstration, throwing rocks and rolling burning tires at IDF troops, the army said.
According to the Red Crescent, two people were wounded by live rounds in Qalandiya. But an army spokesperson said that only tear gas and rubber bullets were used in order to disperse the riot.
The Palestinian ambulance service said that a third Palestinian was hit by live gunfire during the protest. The IDF acknowledged that in addition to tear gas and rubber bullets, soldiers also used live 0.22 Ruger rounds, a lower-caliber bullet that is believed to be less lethal than conventional ammunition.
Smaller protests involving dozens of Palestinians also reportedly took place in Hebron and the surrounding villages, in Azzun and Dayr Sharaf in the northern West Bank and Abu Dis, outside Jerusalem. 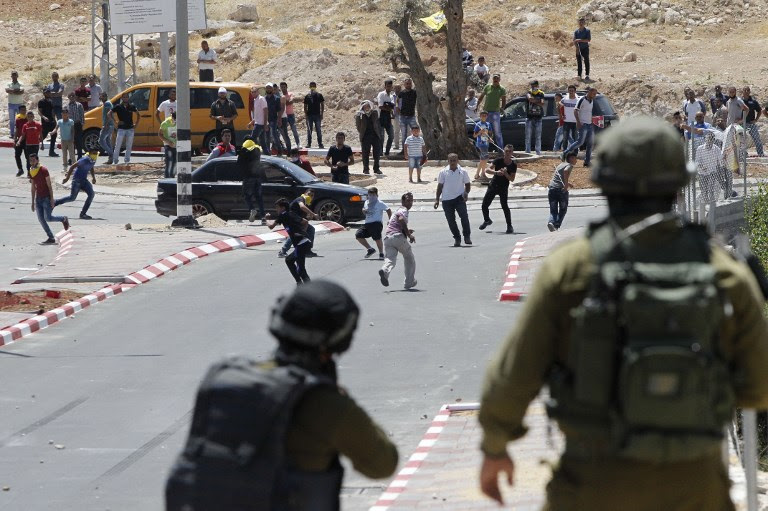 In violent protetests over the past few weeks, two Palestinians were killed and dozens of others wounded in clashes between rioters and Israeli security forces or civilians.
Also on Monday, Palestinians observed a general work strike in solidarity with the security prisoners.
The strike paralyzed East Jerusalem as well as West Bank cities and suburbs, with shops closed and both public and private sector employees refusing to work, AFP correspondents said.
The industrial action came in response to a call from the Palestinian striking prisoners’ support committee, a grassroots group.

WHY THE ‘TWO-STATE SOLUTION’ HASN’T WORKED, AND CAN’T

Much has been written about the “two state solution” (TSS) or “two states for two peoples” (TSTP) as the path to resolving the conflict between Israel and Arab and Muslim countries and Palestinians, but at the same time there appears to be little understanding of why it consistently fails. It fails because it is focused on territory, Palestinian statehood, rather than ideology – Palestinian nationalism and Palestinianism, the belief that Jews have no right to a state and that Jewish nationalism, Zionism, is anathema and that Jewish history is a fraud.

The idea of separating Israeli Jews and Arab Palestinians into two separate states is logical, but practically it involves other issues which remain obstacles. Supporting Palestinian statehood, therefore, without including a resolution of or reference to other problems prevents a rational, comprehensive approach to finding a realistic solution.

The principle behind the TSS/TSTP seems simple: since Arabs don’t want to live under Israeli rule and Israelis don’t want to rule over them, give them a state in all or most of Judea and Samaria (the “West Bank”), the Gaza Strip and eastern Jerusalem.
Jews would be expelled from the Arab Palestinian state and not permitted to live there, but Israeli Arabs would remain in Israel as citizens. A population transfer/ethnic cleansing would occur in only one state.

Granting statehood, however, depends on resolving all other issues which were included in previous “peace plans” and agreements such as the Oslo accords: 1) ending the conflict, ending violence and incitement; 2) ending all claims against Israel, abandoning “the Nakba” (the catastrophe, Israel’s establishment); 3) ending the “Palestinian Right of Return” of refugees and their descendants to Israel; 4) shared status of the Temple Mount and Jewish rights in eastern Jerusalem and the Old City; 5) continued IDF presence in the Jordan Valley and other strategic areas; 6) land swaps to include areas of major settlement; 7) access to all holy sites; and 8) recognizing Israel’s right to exist as the nation-state of the Jewish People and its historical and religious connection to the land of Israel and the Temple Mount.

These basic, minimal requirements to advance the “peace process” and statehood were rejected by Palestinian leaders time and again.

Supporting the TSS without including the fundamental elements upon which it rests – and dealing with the issues of ideology – renders it irrelevant. Focusing only on territory – a state – and Palestinian national self-determination without context not only distorts the problem, but prevents efforts to resolve it.

Virulent Palestinian nationalism, or more generally, Palestinianism, means only one thing: kill Jews and destroy the State of Israel. The roots of this toxic nationalism are found in the Grand Mufti of Jerusalem Haj Amin al-Husseini, who instigated pogroms against innocent Jews in the 1920s and ‘30s and actively supported the Nazis. His successors in the PLO, led by Yasser Arafat and Mahmoud Abbas, as well as Hamas, have not deviated from this path.

Articles: The Six-Day War: A Retrospective

Several weeks from now Israel and Jews around the world will be celebrating a seminal moment in Jewish history -- the 50th anniversary of Israel’s monumental victory in the Six-Day War. For those of us alive during those daunting days in May 1967 leading up to the war, it was a period in time we will never forget, nor should we. Its ramifications were and are germane to this very day.

Throughout the days leading up to war Nasser challenged Israel to fight on a daily basis, stating: “Our basic objective will be the destruction of Israel. The Arab people want to fight.” Echoing these threats of annihilation with equal and perhaps greater vigor was then Syrian Defense Minister Hafez al-Assad, the father of today’s mass Syrian murderer, Bashar Al-Assad: “The Syrian army, with its finger on the trigger, is united…. I as a military man believe the time has come to enter into a battle of annihilation.”

When King Hussein of Jordan signed a defense pact with Egypt on May 30, 1967 the noose around Israel’s neck further tightened. Nasser gleefully proclaimed: “The armies of Egypt, Jordan, Syria and Lebanon are poised on the borders of Israel... to face the challenge, while standing behind us are the armies of Iraq, Algeria, Kuwait, Sudan and the whole Arab nation. This act will astound the World. Today they will know that the Arabs are arranged for battle, the critical hour has arrived. We have reached the stage of serious action and not declarations." This was the one point of agreement Israel shared with her unremitting foes.

On June 2, 1967, three days before actual hostilities would erupt, Israel’s Chief of Staff, Gen. Yitzhak Rabin called a meeting with the Israeli Ministerial Committee of Defense. Although the IDF had been on full alert for three weeks, arrayed against Israel were approximately 465,000 troops, more than 2,800 tanks, and 800 aircraft. In a grave but steady tone Rabin addressed the Committee: “We don’t want war for its own sake. I think we may find ourselves in a military situation in which we have lost many of our advantages, reaching a position, which I don’t want to express too harshly, in which our existence is in serious danger.”… “Time is not on our side. And in a week or two, or in three or four weeks, the situation will be worse.”

In the early hours of June 5, 1967 Israel launched a preemptive air strike on the air forces of Egypt, Jordan, and Syria with devastating effect. Five days later the armies of these nations along with Iraq, which also joined the fray were crushed and forced to sue for a ceasefire. The war may have taken only six days but its ramifications and similarities to today’s Middle East conflict is unquestionable. What were the accomplishments?